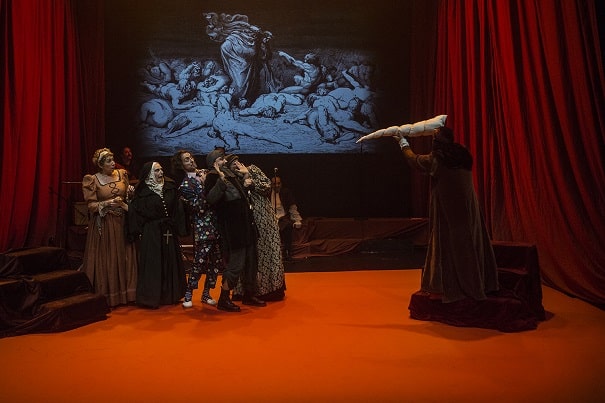 Rasfa Room Presents a special performance of ‘My Dear Silly Spain’ on the night of 31st December to say goodbye on the 22nd with a smile. The stage is transformed into a special and surreal hell in this satirical comedy with live music, in which five characters heed the poet Dante Alighieri’s call to save Spain from eternal fire.

He said, “This is the seventh time we are going to say goodbye to the year with the public from the stage.” juan carlos garesDirector of the Center for the Creation and Exhibition of the Performing Arts, for whom spending New Year’s Eve in the theater is an experience for both the audience and the artists themselves.

“The performance starts later, at eleven o’clock at night, so that the chimes are timed in the middle of the performance. And they are included as another element of the show. Every year the text of the work on the bill is adapted. so that the end-of-the-year countdown fits in with the setting and characters”, explains Gares. Moreover, cameos and surprises are included throughout the night which add value to the work.

“The public has a kotion in their town and with the chimes, the stalls become a party. We also distribute kava and the characters toast with the audience. It’s a very special moment because theater is always something lively, unexpected But that night the fourth wall is completely broken, we feel very close to the audience and they feel us. The complexity is total”, confirms the director and actor of Sala Rasafa, who acted as the interpreter. I have participated in many end-of-the-year demonstrations.

The ceremony continues after twelve grapes are eaten. And, finally, the celebration moves to the hall of the theater to share a drink, continuing to enjoy the music, completing an evening welcoming 2023 with the best atmosphere that is already routine. “There are more and more Valencian theaters that offer the possibility to close the year enjoying the theatre. And, ever since we started at Saala Rasafa, there are people who come back every season. There are people who come for the first time and are taken by surprise because the experience of coming to the theater that night is very different from any normal performance”, says Gares. Tickets for this special session still sell at €50 apiece. Rasafa can be purchased on the website.

The audience is the judge of the real final decision

Drinking grapes with Santa Teresa de Jesus, Captain Agustina de Aragón, the philosopher Maimonides, the conquistador Hernán Cortés, the poet Dante Alighieri and the artist Salvador Dali is something that surely could only happen in Sala Russafa. He stars in ‘My Dear Silly Spain’, a comedy with live music co-produced by the theater and the Arden Company for Christmas.

Chema Cardena He signs and directs this new satirical show, in which he reviews the history of the country and his fellow countrymen, drawing on a lot of humour, criticism, self-criticism and of course parody.

Live Music offers covers of great songs from the musical Jesus Christ Superstar and artists like The Communards, Boney M, The Police, Cecilia or Coldplay. Giving new meaning to the songs or reinforcing the comedy of the scenes, the themes are intertwined in the adventures of the strange rescuers who try to escape the condemnation of Spain’s eternal flames.

The decision making power is in the hands of the public, this special has been transformed into the jury of the final trial. and the characters try to convince him that Spain and the Spaniards are innocent of such crimes as anger, greed, gluttony, lust, laziness, arrogance, and envy.

Going through topics such as the Spanish Reconquest, the conquest of the Americas, gastronomy, religion or the passions of the monarchical dynasties that ruled the country, the most outspoken and caustic humor characterizes the show which remains on Billboard until January 8. ,