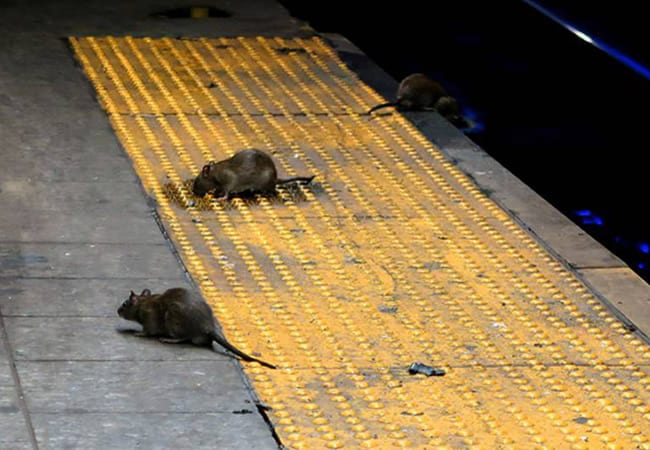 Big Apple officials are powerless to control a plague of rodents, which is getting stronger with climate change

Luis Aguilar is on the alert as soon as spring arrives. For several days he has been patiently looking at a hole visible in a flower pot in front of the building he maintains. “There are at least eight pups,” he calculates. But before taking the shovel and destroying the burrow inside the mother, he pulls out a roll of duct tape to seal up the holes in his pants at the ankles. “Rats are always looking for a place to hide when they are surrounded,” he warns.

The extermination operation lasts a few seconds. “You’ll see how they don’t come back here for a few years,” he says confidently after exterminating a whole family of rats, “they’ll look for a safer place.” Poison and traps, they say, are useless. He remarked that New York’s wealthy Upper West Side neighborhood was suffering. “New Yorkers are used to living with them,” he says, but cautions that the problem has been on the rise in recent years and he knows his sweeps aren’t really going to do much good.

As higher prices force more residents to leave the city, the rat population grows. Take a look at the latest statistics from the New York Hotline. Complaints from neighbors to the 311 number increased by almost 40% in one year to more than 17,350 calls. And this is despite the fact that Mayor Bill de Blasio declared war on rats two years ago, allocating $32 million (28.4 million euros) from the municipal budget to combat and eradicate rodents.

The frequency with which rubbish bins are collected has increased and new steel bins have been installed in the parks to reduce waste. New York City even has a special team dedicated to exterminating rats. His new weapon of attack is to put dry ice in the burrows when the animals are inside and seal the holes so that they cannot escape.

But looking at the situation, the city of skyscrapers is losing the game. Even after lakhs of efforts, no locality is free from this epidemic. This is a common problem in other big cities like Philadelphia, Washington, Chicago, Los Angeles or Seattle. However, biologists make it clear that New York may never be completely rid of rats.

To begin with, the Manhattan neighborhood is on an island and the water bathes the Bronx, Queens and Brooklyn as well. The extensive metro network gives them security and a way to move. And the main factor contributing to the increase in rodent populations is the garbage collection system, which piles up into an infinite buffet in front of bars and restaurants at night until the trucks pass by hours later.

Two more factors are, according to experts, fueled its growth in recent years. While the construction work is stalled. “It’s like stepping on an anthill,” says Aguilar, pointing to the same sidewalk works that “pull them out of their hiding places.” Another construction has just started around the corner. “Hundreds of people came out when the building was demolished.” New high-rise buildings enrich the buffet of these animals.

Another, more worrying, factor contributing to the plague is the effect of climate change. Mild winters increase the survival of mammals and speed up their reproduction process. The rats gained weight and size in parallel. “Even the cats are afraid of them,” says the man in charge of the farm. That is not without reason. A study by biologist Michael Parsons of Fordham University suggests that felines are no longer used to hunt rodents.

In fact, they are seen eating food from the same garbage pile at the same time on the road. They point out from Arrow Exterminating that the only way to keep the population from continuing to grow, is to “continually stay on top of it.” There is a group of volunteers known as the Riders Alley Trencher Society—the acronym in English reads like rats—who patrol around the city at night with terrier dogs.

It’s a good excuse to go for a walk in the summer when the weather is nice and to use animal instincts. They can catch up to twenty rats in each foray. There is no reliable count of rodents living in the city. It is said that they are twice as tall as humans. Climate change, as the New York Department of Sanitation has pointed out, only exacerbates conditions.

They accept that they do not have the right weapons to wage war and the best they can do is reduce it to a tolerable level. Robert Sullivan, who has investigated the most unwanted inhabitants of the great American metropolis, however, believes that rats actually mirror humans. They are so integrated that they are genetically classified by Uptown and Downtown rats.