Next COVID-19 variant of concern could come from Africa’s Great Lakes region: Study

The next variant of concern (VoC) could come from the Great Lakes region of central Africa — the countries of Burundi, Tanzania and Democratic Republic of Congo — according to a risk model developed by health analytics company, Airfinity.

down to earth accessed the data compiled by the research group. Nigeria and Yemen are the next likely destinations after the Great Lakes region.

India also features high on the list, according to the database. Pakistan and Bangladesh are the next two countries from the Indian Subcontinent to feature in the list. 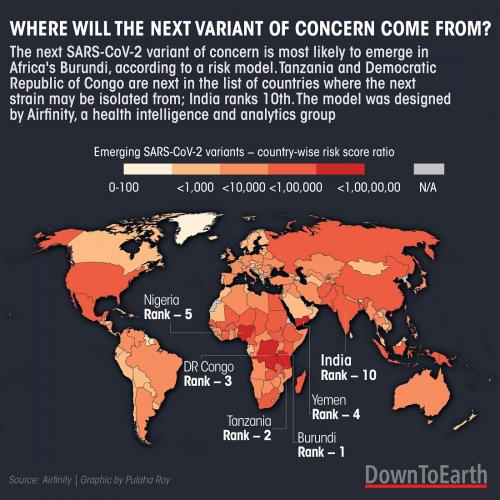 At a more granular-level analysis, DTE found eight African countries featured in the list of top 10 countries based on the risk model; Yemen and India were the other two countries to feature in the list.

Burundi currently has a cumulative caseload of 37,000 cases, with 60 new cases in the last 24 hours, according to the World Health Organization.

Its numbers are comparatively low compared to many other countries. But what makes Burundi most at-risk as being the breeding ground for the next VoC is its low stringency index (adherence to COVID-19 protocols) and vaccine coverage — two of the four indicators which the research group took into account when they came up with the risk model.

Multiple VoCs are thought to have emerged in those with suppressed immune systems and were therefore unable to clear the virus completely, allowing the virus to replicate over a long period of time in the host and give more chance for the emergence of a mutation which would increase the viral fitness (make it more transmissible, more immune evasive…. ie more dangerous).

How did the researchers arrive at the final scores and ranked the countries accordingly? According to Buchanan, all four parameters were equally accounted for.

While immunocompromised prevalence and vaccine coverage was out of every 100 people, the stringency index or how strictly a country is following the COVID-19 protocols, is based out of 100.

But how sound is the risk model that the research group has developed? The data, according to Buchanan, should be used as a reference point.

“It is just risk analysis, variants can potentially come from anywhere, as the natural mutation emergence is random,” she said.

We are a voice to you; you have been a support to us. Together we build journalism that is independent, credible and fearless. You can further help us by making a donation. This will mean a lot for our ability to bring you news, perspectives and analysis from the ground so that we can make change together.