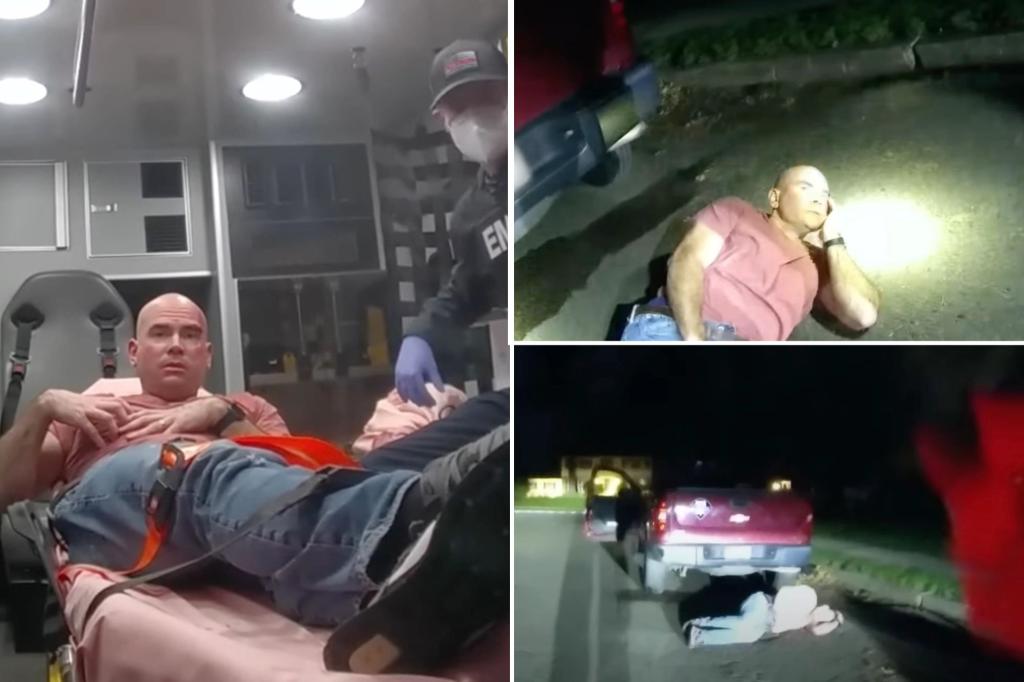 A New Jersey police chief charged with drunken driving last month could be seen lying in the street next to his pickup truck with his pants down — and responding officers mocked him until they realized who he was, a report said.

Bordentown Township Police Chief Brian Pesce was found on the floor in nearby Hamilton after a 911 caller reported following a “drunk” driver “weaving all over the place” and nearly hitting a mailbox, according to documents first obtained by NJ.com.

“He’s gonna kill somebody,” the caller warned of the pickup driver.

She called back to say that the truck had stopped and the driver was “on the ground in the middle of the road … He’s so obliviated,” the report said.

The 23-year police veteran was then seen in bodycam footage sprawled out on the ground behind the truck late on April 22.

Noticing a wet patch on the ground, the same officer suggests with clear disgust that he “p—ed on his tire and then took a spill,” the footage shows.

“You’re sleeping in the middle of the road,” one replies, while the other says, “Your pants are down.”

When one cop asks if he is diabetic, Pesce says “Not at all” — with the officer replying, “Probably the wrong answer.”

After the snippy exchanges, one of the officers searches Pesce’s vehicle and finds his police badge — and remarks, “Ohh,” NJ.com said, referring to the hour-plus footage the site obtained.

Both officers then turn off their cameras, the outlet said — with their tone markedly different when the cameras are switched back on, with Pesce now being called “chief,” the outlet noted.

As he is led into an ambulance with an apparent head wound, the chief sounds confused as he says, “I drove? … I wasn’t driving anywhere.”

Pesce was charged with five traffic offenses, including drunken driving, reckless and careless driving, failing to report an accident and leaving the scene involving property damage, the report said.

Pesce, who had been chief since 2018, was put on restricted duty in the department.

He had got the top job after initiating an internal affairs action against his then-boss, Frank Nucera, who is scheduled to start serving a 28-month prison sentence this week on federal hate crime charges, NJ.com noted.

Nucera — who allegedly used the N-word and likened black people to ISIS — was convicted of lying to federal authorities questioning him about an attack on a black teen in custody.

Val McCullough: Driving together will not stop climate change, but it can help