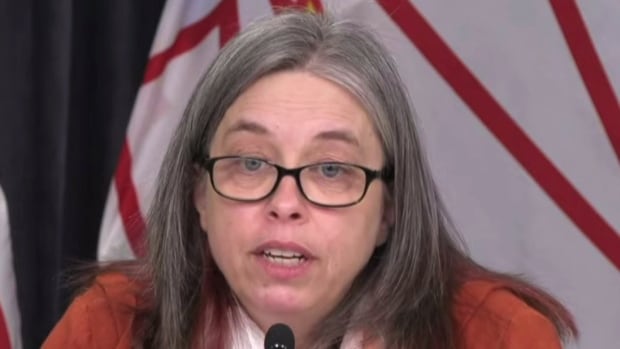 Newfoundland and Labrador is reporting two more deaths due to COVID-19, along with a plan to further loosen restrictions on gatherings and sporting events in the province.

The province has now reported 48 deaths since March 2020. A total of 210 new cases were reported by Chief Medical Officer of Health Dr. Janice Fitzgerald on Tuesday afternoon. With 247 new recoveries, the province’s known active caseload has dropped to 1,487. Twenty-three people are in hospital due to the virus.

The province said it completed 748 COVID-19 tests since Monday, leading to a test positivity rate of 28 per cent. Over 490,000 tests have been completed to date.

Fitzgerald said team competition within leagues or regions can resume Monday. Tournaments are still not permitted, but single games can occur.

If cases emerge within a team where physical distancing and mask wearing is not observed, teammates would become non-household close contacts and follow the appropriate isolation protocols.

Restaurants, bars, theaters, bingo halls and other performance spaces can, starting Monday, operate at 50 per cent capacity provided physical distancing can be maintained. Food and drink is permitted but masks must be worn at all times when not eating or drinking. Gyms, fitness facilities and arenas can also operate at 50 per cent capacity with distancing.

Restrictions for faith-based groups are being loosened as of Saturday, allowing churches that require the province’s vaccination passport to operate at 50 per cent capacity, but 25 per cent capacity if not using the vaccine passport.

Read Also:  Medleta needs help to get 'incredibly important' kiln back into operation

While Fitzgerald said the provincial government had expected to announce further changes on Feb. 21, she said the province’s favorable epidemiology and vaccination rate allowed them to do that sooner.

“While new restrictions just came into effect yesterday, it has been a week since those decisions were made. And while a week may seem short, in the world of public health and especially COVID, a week of data can help better solidify trends and provide reassurance in the direction we are taking,” she said.

Furey accounted for the change to the province’s vaccination rates, which he says are among the highest in North America.

The province has also seen a small increase in the rate of booster doses over the past week, Fitzgerald said, noting over 260,000 booster shots have now been delivered in Newfoundland and Labrador.

Fitzgerald said the province will also stop using its alert level system and will simply list all current public health restrictions in one place on the provincial government’s website.

“It’s difficult to have that system apply appropriately at this point, and we got a lot of feedback that people were trying to make things fit with the alert levels and it was just causing more confusion,” Fitzgerald said.

“We don’t want that to happen. We just want people to be aware of what the restrictions are.”

Read Also:  Which Winnipeg restaurants have been named some of the best in Canada?

As the system changes, Fitzgerald encouraged patience and understanding with people across the province as they make another transition.

Residents in long-term care and acute care will now be allowed two support visitors, instead of one, effective Thursday, and will be able to leave their care home for family outings or visitation outside appointments.

Group activities can also happen under guidelines, with the exception of events that include sharing food. However, Haggie said, residents who live in the same unit or on the same floor of a care home can eat together without the need for physical distancing.

All changes will be announced on via media release on Wednesday, the minister said.

Haggie said the changes in long-term care were made possible by high vaccination levels within the senior population. About 80 per cent of people over 70 have had a booster dose, according to Furey.

“We have significant boosting in long-term care and seniors facilities in general. That has provided that extra layer of protection,” Haggie said.

..Also the era of foreign apps like WhatsApp, Google Maps and Twitter will end? This Indian app is facing stiff competition

Journalist Andrea Elliott’s Brief But Impressive Look at the Unseen