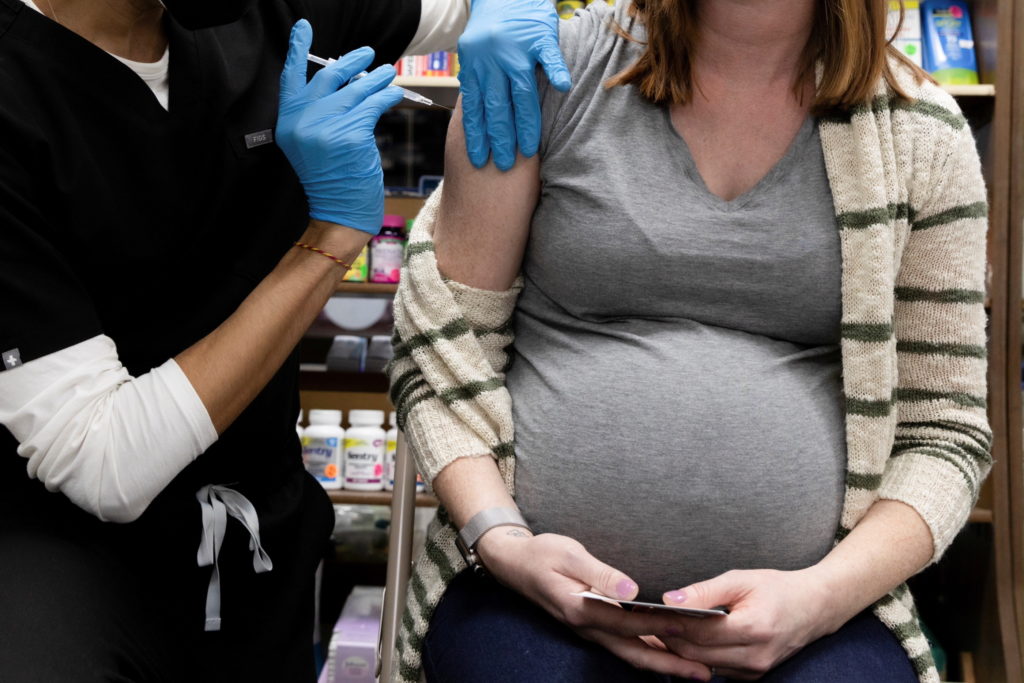 Non-vaccinated pregnant people who get COVID-19 are at much higher risk of complications from illness and death of their babies than their vaccinated counterparts, according to a new study from Scotland.

The authors of a population-level study published Thursday in Nature Medicine examined data from all pregnant people in Scotland between December 2020 and October 2021 that included information on COVID-19 vaccination status and infection. Almost all pregnant people who needed critical care for COVID-19 – 102 out of 104 in total – were without vaccination. There were a total of more than 450 fetal and neonatal deaths, coinciding with COVID-19 – all in unvaccinated mothers.

“Vaccination in pregnancy is the safest and most effective way for pregnant women to protect themselves and their babies,” said study author Sarah Stock, an obstetrician and maternal and fetal medicine specialist at the University of Edinburgh. “This advice needs to go to partners and parents and grandparents and friends.”

Read more: Impact of COVID-19 vaccines – finally – to be tested in pregnant people like me

Extended perinatal mortality – which measures the rate of babies dying from about 28 weeks of pregnancy to about one month after birth – from 22 per 1,000 births for pregnant people diagnosed with COVID-19 within a month of giving birth There were more deaths. This is much higher than Scotland’s background perinatal mortality rate during the pandemic of more than 5 deaths per 1,000 births.

Vaccination remains the major difference. Once vaccines for COVID-19 became available, 77% of infections among pregnant people were in those who had not been vaccinated. Pregnant people who were vaccinated during their pregnancy had significantly lower perinatal mortality, a little over 4 deaths per 1,000 births.

During the study period, which began just before the vaccine was distributed to the public, more than 130,000 people in Scotland were pregnant. As of October 2021, only 32% of people who gave birth that month had been vaccinated. According to the Centers for Disease Control and Prevention, the vaccine rate among pregnant people in the US was about the same at the time — 33% — though it rose to more than 41% in the new year. In both Scotland and the US, these rates are well behind vaccination rates in the general population.

According to researchers, pregnancy puts COVID-19 patients at higher risk of complications, but it does not make a person more vulnerable to catching the virus. Infection among pregnant people in the study was spread evenly throughout the trimester, but the risk of complications increased with the duration of the pregnancy. Hospital admissions among pregnant people increased from less than 7% of those with COVID-19 infection in the first trimester to more than 33% of those with infection in the third trimester. No pregnant person infected with SARS-CoV-2 in their first trimester was admitted to critical care because of COVID-19 complications, compared to more than 4% of those admitted in their third trimester.

Researchers essentially cannot differentiate between hospitalizations due to COVID-19 from other issues that coincide with those of COVID-19 infection. The study also did not cover how the Omicron type might affect pregnancy. This is part of the problem with researching COVID-19, experts said: by the time an insight is gained, the situation has already changed.

“The plane is already flying and we’re trying to figure out how to make it,” said Yalda Afshar, a maternal and fetal medicine researcher and physician at the University of California, Los Angeles, who was not involved in the study. Were.

Small or less-representative studies have previously pointed to a higher risk for pregnant people infected with SARS-CoV-2. But experts praised Scotland’s research for its longitudinal, population-level design. Such a study is not possible in the United States, Agard said, because there is no central electronic medical system from which to pull medical records. Even the CDC’s tracked data on COVID-19 and pregnancy comes from a network in which state and local health departments should opt for participation.

Data for the study was collected through COVID-19 in Pregnancy in Scotland, which continues to track everyone in the country who became pregnant after March 1, 2020. The researchers hope to continue analyzing the data, particularly confounding factors such as socioeconomic and demographic status.

For Agard, the study’s findings emphasize that pregnant people are a significant population given COVID-19 and other diseases. She wonders how more messages could have been conveyed about the importance of vaccines if pregnant people were included in clinical trials from the start.

“For the love of Pete, pregnant people need to be included in vaccine trials,” she said. “So we don’t have to guess the best answer and then look at a year’s worth of data to find out if we did something wrong.”

This article is reproduced with permission of STAT. It was first published on January 13, 2021. View the original story here.

Blood proteins could be the key to a long and healthy life, study finds

Every year many people die during or after sex. A pathologist explains why

Denver weather: Our first snow this year has come late but some seem to be on the way