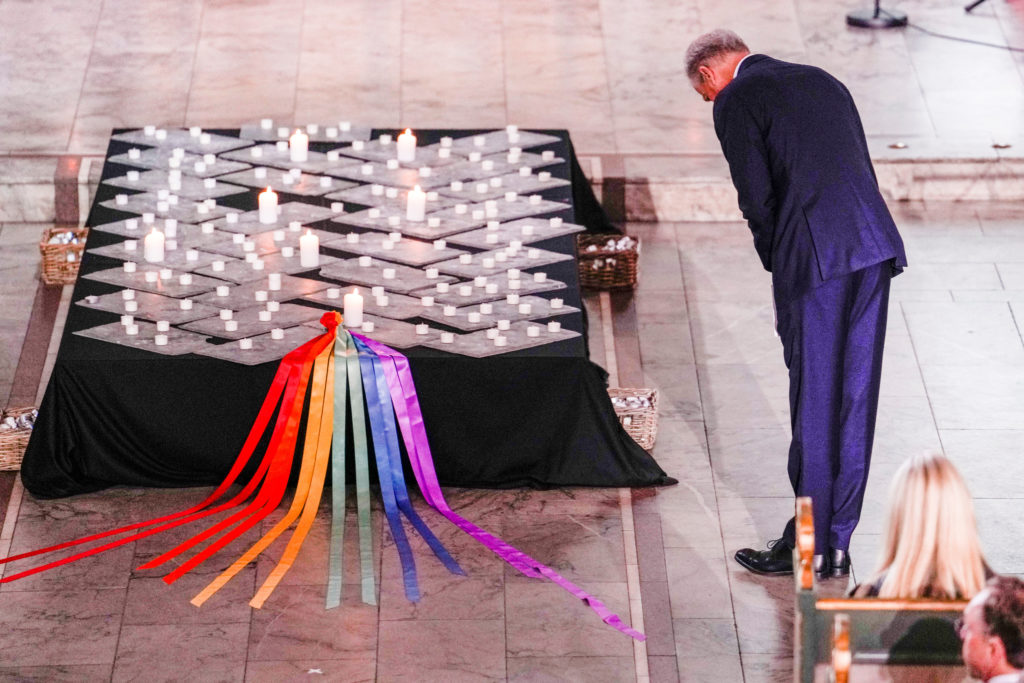 OSLO, Norway ( Associated Press) – Norway’s Prime Minister and members of the royal family joined mourners at a memorial service at Oslo Cathedral on Sunday for the victims of a shooting attack as the capital held its annual LGBTQ Pride Festival.

A gunman opened fire in central Oslo’s nightlife district early Saturday, killing two people – a man in his 50s and another in his 60s – and wounding more than 20 in what the Norwegian security service called an “Islamist terrorist act”. mentioned.

A suspect, identified as a 42-year-old Norwegian citizen originally from Iran, is in custody. The capital’s Pride parade was scheduled to take place on Saturday, but was canceled.

The crime scene included the London Pub, a bar popular with the city’s LGBTQ community. Police investigators said it was unclear whether hatred towards people based on sexual orientation and gender identity motivated the attack.

Norwegian Prime Minister Jonas Gahr Stoere said in a speech during Sunday’s memorial service that “the shooting in the night hours put an end to the Pride parade, but it did not end the fight and the attempts at discrimination, prejudice and hatred. to stop fighting. “

“I know how many of you felt when it became clear that the perpetrator belonged to the Islamic community. Many of you have experienced fear and unrest. You need to know this: We stand together, we are one community and we are jointly responsible for the community, ”said Gahr Stoere during the church service, which was also attended by Crown Princess Mette-Marit.

Norwegian media have identified the suspect as Oslo resident Zaniar Matapour, who arrived in Norway in the 1990s from a Kurdish part of Iran.

Matapour had a previous criminal record that included a drug offense and a gun offense for carrying a knife. Investigators said they seized two weapons after Saturday’s shooting: a handgun and an automatic weapon.

The Norwegian Homeland Security Agency, known by its Norwegian acronym PST, said on Saturday it only became aware of the suspect in 2015 and later became concerned that he had been radicalized and was part of an unspecified Islamic network.

On Sunday, Norwegian media reported Matapour was allegedly in close contact with an Islamic extremist living in Norway of whom Norwegian police had long been aware.

Read Also:  Prime Minister Modi will chair a high-level meeting of the UNSC on maritime security

Matapour was detained on suspicion of murder, attempted murder and terrorism, based on the number of people targeted at various locations.

His defense attorney, John Christian Elden, who previously represented Bhatti, said his client gave no explanation for his actions.

“It is very unclear if there is any motive,” Elden told the Norwegian newspaper VG. “It also means that one has to be very careful to speculate about the reasons why this (shooting) happened.”

Matapour’s interrogation by police was cut short on Sunday after he refused to have his statement recorded and videotaped, which is standard police practice. He fears the police will edit the recordings and manipulate his words by the police against him, Elden said.

AI algorithms may hinder our ability to think

Seeing is believing when it comes to health risk and behavior change: Personalized imaging to visualize health may be effective in discouraging risky behaviors