Not cross buns? The Easter bun variations that divide Australia – and our verdict 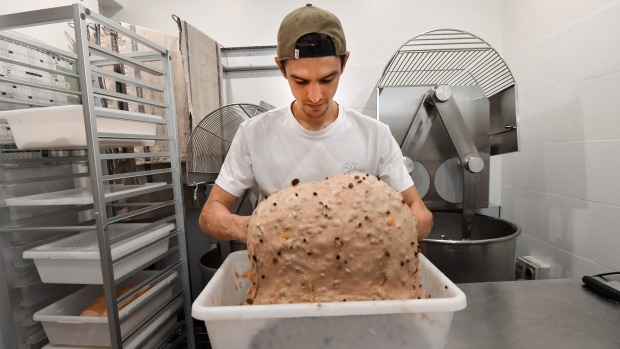 Easter in Australia is a time of chocolate eggs, cooler mornings and the smell of toasted fruit buns. But with each year, that aroma is less likely to feature cinnamon and allspice, as retailers debut savoury, fruit-free and caramel-studded hot cross buns.

The choc-cross bun, one of the early renegade flavours, is today pretty vanilla compared to variations that include “berry ripe”, rum and raisin, and jalapeno and cheese, the latter released by Coles this week.

But without the fundamentals of fruit peel, dried fruit and medieval spices, can any of these even be considered a hot cross bun?

“My opinion is the hot cross bun is sacred and not to be tampered with,” says Dougal Muffet of Associated Press Bakery in Surry Hills.

Muffet and his team are focused on perfecting a hot cross bun using long-fermented dough, heritage grains and freshly milled spices this year.

“Personally, there is only one hot cross bun,” says Christine Tran of Falco Bakery in Collingwood. “You can’t even change the fruit in my opinion.”

Her commitment to tradition means exactly one type of hot cross bun is offered at the inner-Melbourne bakery.

“Myself and all the people working here, we like the classics and we have a lot of respect for them,” says Franco Villalva of To Be Frank, also in Collingwood. “If we do something, we want to try and do the best that we can.”

Get the latest news and updates emailed straight to your inbox.

But Villalva has listened to his customers and introduced a vegan bun featuring chocolate and cranberry. He does wonder if it’s right to call it a hot cross bun, though.

For Tran, anything without dried fruit, peel or warming spices is just a bun.

Brenton Lang of Rustica bakeries in Melbourne is proud of his traditional slow-ferment recipe, which he’s used for more than 15 years and intends to keep using. But he’s not afraid to branch out slightly. Lang and his team have experimented with hot cross doughnuts in the past and also offer a choc-cross bun each year.

Nonie Dwyer of gluten-free and dairy-free bakery Nonie’s Foods in Botany strives to replicate the traditional buns that people love, while omitting allergens.

“Call it something else, don’t call it a hot cross bun,” she says of the fringe flavors that are becoming more common.

She uses rice flour, tapioca and sunflower oil, among other things, to achieve a traditional bun without traditional ingredients.

This Easter, Annandale bakery Cherry Moon will again offer its cherry, chocolate and wattleseed variation alongside a traditional bun. Owner and head baker Kimmy Gastmeier estimates her cherry version made up 40 per cent of last year’s bun sales.

Gastmeier says that while she’s a traditionalist, she is open to variations if they make sense. “If the flavor is groundbreaking, there’s an exception. But I’m not really down with going off track just for the hell of it.”

Her cherry-choc bun was a way to use wattleseed, an ingredient that reminds Gastmeier of an important trip she took to the Northern Territory. She also thinks cherry and chocolate are natural bun-fellows.

But the majority of punters are here for hot cross fun – at least according to the big retailers. Woolworths reports that its Cadbury Caramilk hot cross buns sold out two weeks earlier than forecast.

Coles sold out of its Vegemite flavored hot cross buns, released two days after Christmas, in eight weeks. The savoury creation even out-performed some of the retailer’s sweet limited-edition varieties, such as butterscotch.

“Savoury hot cross buns are the new craze,” says Andy Mossop, Coles general manager for bakery, deli and seafood. He is expecting a strong response to the new jalapeno and cheddar flavour.

Love it or hate it, hot cross buns continue to appear in supermarkets months before Easter. Woolworths says 2.1 million buns were bought the first week they hit shelves, even though it was the middle of summer.

But many small-batch bakeries haven’t even sold one bun yet, particularly in Sydney. Cherry Moon is a few weeks away from preparing its wood-fired oven to crank out thousands of buns a day. It’s a careful process that requires getting the balance of heat and woodfuel just right.

“It’s not like another bakery where we can just press a button,” says Gastmeier.

Nonie’s Foods started baking hot cross buns this week in response to mounting customer inquiries. But Dwyer would not like to debut them any earlier.

“Hot cross buns are a seasonal thing. It’s really special that we have certain foods through the year that can be celebrated for a short period of time.”

In Melbourne, To Be Frank’s co-owner Franco Villalva caved to customer pressure and served his first bun on February 26.

The Argentinian-born baker, who didn’t try his first hot cross bun until three years ago, can’t believe how enthusiastic Melburnians are about the spiced snack. Regulars began asking for them as soon as the bakery reopened for the year in late January. Buns have also been spotted at Falco, Wildlife and other artisan bakers in recent weeks.

Villalva is working on a hot cross variation of the bakery’s popular panettone to add to the shelves and also plans to unveil a special saffron and candied lemon bun as part of the Melbourne Food & Wine Festival this month.

Meanwhile, Brenton Lang has these tips for home bakers. “You need a good recipe. Make sure you’ve got a lot of spare time. The longer the process the better the result.”

By launching a Vegemite-flavoured hot cross bun on December 27, Coles combined the two things Easter traditionalists hate most about the modern bun market: wacky flavors and a sale date well before Good Friday.

The retail giant must have some idea of ​​what it’s doing, however, as the limited edition bun flew off shelves, according to a Coles spokesperson. Other national retailers are on the left-field hot cross bun bandwagon too, and added chocolate seems to be more popular this year than ever before. Here’s what to pick up or put down when you’re shopping for a quick bun fix.

Smells like the fudge sold in every tourist town of Australia. Lots of gooey caramel in each bite, but a lack of salt means the final product is way too sweet. It’s impossible to imagine anyone over the age of five enjoying these.

Coles Jalapeno and Cheese, four for $3.50

More peppery heat than expected for a supermarket bun, although you might have trouble telling the flecks of jalapeno from mould if you leave the buns sitting around for a few days. Very chewy, very little sweetness, and the cross is barely visible beneath a blistered skin of parmesan. These have as much in common with a traditional hot cross bun as a nougat egg does with something that came from a chicken. Not bad with Vegemite though.

Topped with coconut and flecked with choc-chips and hardened pieces of cherry puree, it’s almost as if Bakers Delight was trying to replicate a certain chocolate bar but couldn’t quite land that Cadbury contract. Dense and sugary without being with cloying, with a generous showing of “fruit”.

You’re hit with a big, warm wallop of rum when you open the packet, so that’s nice. A bit dry, but the rum-soaked risesins keep things interesting and dark chocolate provides a depth of flavor seldom found in supermarket buns. One for eating with a nip of whiskey in front of the telly.