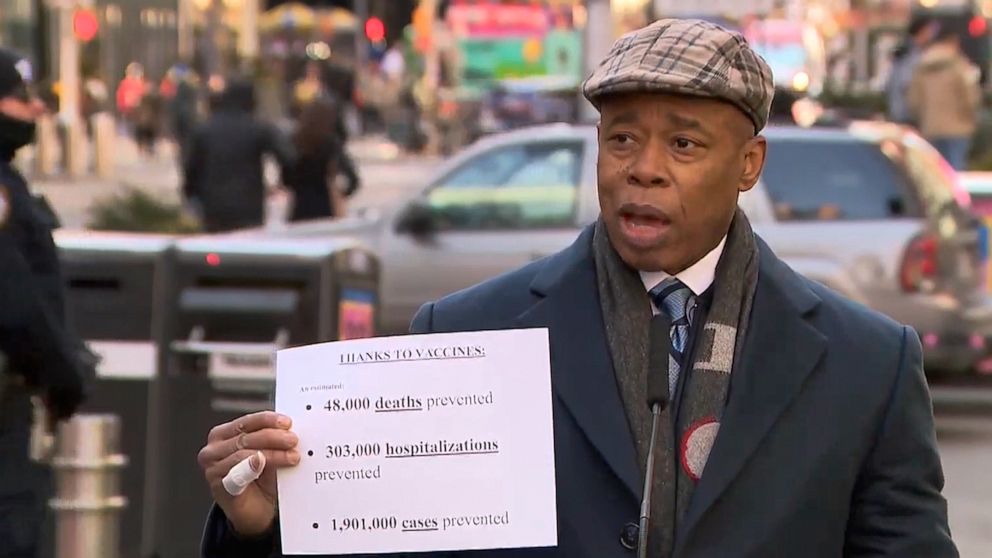 NEW YORK — New York City, which has long prided itself as having the nation’s toughest COVID-19 safety protocols, will do away with several of them next week, including mandatory masking in public schools and vaccination requirements at restaurants, entertainment and cultural venues , the mayor announced Friday.

Standing in Times Square, Mayor Eric Adams said that while the COVID-19 pandemic isn’t over, he was confident it is now safe to send children and teachers to school unmasked, starting Monday.

Individual businesses can still decide to keep mandates in place if they choose, but as of Monday the city will no longer require they check guests’ vaccine cards.

The Broadway League has said it will maintain mask and vaccination requirements in all its theaters at least through April 30.

Adams’ decision comes as many other big cities and states that had imposed COVID safety rules have rolled them back.

Illinois lifted face mask requirements for many indoor spaces on Monday. Chicago stopped requiring proof of vaccination to dine in restaurants. As of Friday, Los Angeles County residents were no longer required to wear masks at restaurants, bars, gyms, shops and other businesses.

The US Centers for Disease Control and Prevention said late last month that most Americans can now safely take a break from wearing masks, including students.

Read Also:  Mithali Raj, Ramesh Powar, would like to move on to the dropout, as a serious challenge awaits in England

Adams, a Democrat, last weekend said he would lift the mandates if infections and hospitalizations continued a downward trend. He stressed that the mandates could be re-imposed if a new variant emerges that, like omicron, poses a special danger.

“If we see a rise in cases or hospitalizations, we are going to come back,” Adams said.

The move to drop mandatory masking in New York City schools has the support of the teacher’s union.

“Our doctors agree with the city’s medical experts that this is the right time to safely move from a mask mandate to an optional mask system,” United Federation of Teachers President Michael Mulgrew said in a statement following Adams’ announcement.

Adams, who took office earlier this year, has said the virus cannot control people’s lives and the city needs to get back to normal. The school mask mandate and Key2NYC vaccination rules were both imposed by his predecessor, Bill de Blasio.

Adams praised the restrictions — and de Blasio — as having saved possibly thousands of lives, but he said it was time for New Yorkers to shed precautions and “celebrate.”

The elimination of the school mask requirement is a remarkable turnaround from just a few months ago, when some parents and teachers were agitating for a return to remote learning as the omicron wave swept through schools.

More than 137,500 public school students and 40,300 teachers have gotten the virus since the start of the school year.

Children under age 5 would still have to wear masks because they are not eligible for the vaccine, under city rules.

The Key2NYC program required New Yorkers and tourists to show proof of vaccination to enter restaurants and bars, work out in gyms, catch a movie, attend a Broadway show, go to a convention or visit a museum.

The rules also famously barred star Brooklyn Nets guard Kyrie Irving from playing home games with the team. But Adams has said so far that he plans to preserve a rule requiring private employers to ensure their workers are vaccinated, which would apply to Irving.

By lifting the Key2NYC rule, Irving would be allowed to attend the Nets’ home games as a spectator but not play.

Recently, New York City has been averaging just under 680 new coronavirus cases and 25 deaths each day, down from nearly 41,000 new cases and nearly 130 deaths per day at the height of the omicron wave in January.

The virus continues to hospitalize and kill New Yorkers with greater frequency now than it did last summer and through much of the fall, when many of the vaccination and school masking rules were imposed.

Around 4,000 city residents have died of the virus since Jan. 1, more than in the previous nine months combined.

Council of States Bishop 63. but become a father