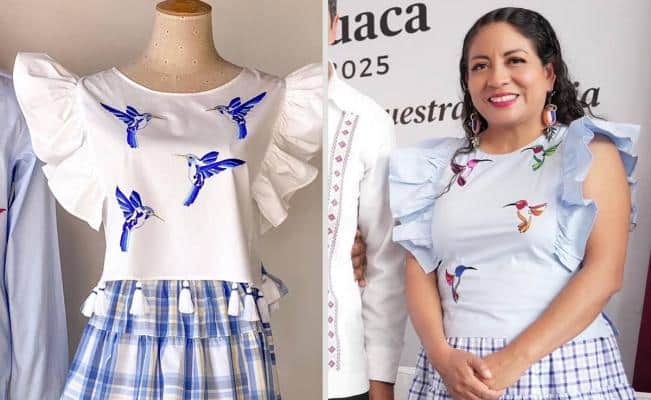 through social networks oaxacan producer Condemned the similarity between its design and the one carried by the deputy, as in both it can be seen that it is a dress made of a checkered skirt and has wide sleeves in the form of four embroidered hummingbirds and ruffles on the shoulders. Two clothes in blue tone.

The garment said by the Morenista deputy was taken away by the new municipal president, during the protest of Roberto Pérez Delgado san pedro ixtlahuacaWhere she went as a special guest along with other MLAs of Morena.

The Oaxacan creator tweeted, “I’m dying with this poor copy, if you know who created this look, ask them to come over to the workshop so we can teach them how to embroider.”

Judging by the comments of users of social networks who indicated that Morenista is not responsible for Plagiarism Since she was only wearing the garment she was given, the designer explained that the deputy “would have to say who gave it to her in order to proceed legally against that person” and asked her directly: Did Nancy Benitez have something to say?

With the addition of clauses V and VI of Article 39, the law seeks to strengthen the operation and functioning of subject specific regional markets throughout the state.

Similarly, provide proper space for exhibition of crafts of the eight regions, so that they can be promoted, promoted and marketed.

The Congress of Oaxaca has also requested to apply Federal Law on the Cultural Heritage of Indigenous and Afro-Mexican Peoples and Communitiesfor the protection of textile designTo avoid plagiarism.