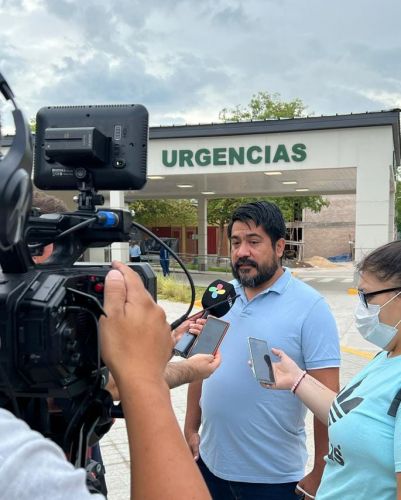 Health department officials visited Perando and Pediatric Hospitals and spoke to health professionals. He also verified the balance of consultation and attention of the emergency guards. The consultation for the use of fireworks is ongoing and the first of the year was born in Castelli.

On Christmas Day, December 25, officials from the Chaco Ministry of Public Health visited the Julio C. Perando Hospital and the Avelino L. Visited Castellon Pediatric Hospital. In these places, he confirmed the urgent care provided in the parties and the proper functioning of the health system. He also spoke to health professionals who provide services during the festival days.

On Christmas Eve and during Christmas, the provincial health system operated normally through emergency guards where many services were provided. “As in previous years, the guards have been covered in their entirety, which is why it is also a time to thank the workers who dedicate themselves year after year and ensure that these important dates But all citizens should be taken care of.” Carlos Fernandez, Undersecretary of Health.

Fernandez explained that “we have come across a clear lack of consultations for injuries with fireworks”, and indicated that there was practically no record in both Perando and Pediatrics. “According to the data we have got injuries due to the use of firecrackers, no consultation has been registered in Perando Hospital in the last 24 hours and we have only one report of a minor due to gunpowder ingestion in the Pediatric Hospital.” In the eyes, with minor injuries,” the officer said.

“In the city of Sanz Pena, two people have been assisted with hand injuries from firecrackers, one of them is being observed and will probably be discharged in the next few hours,” the official said. In terms of care added pyrotechnics.

In the last 24 hours, 18 patients were treated at Perando Hospital due to road accidents. These are mild cases and do not require hospitalization. A two-year-old girl with minor head injuries due to a motorcycle-pedestrian accident was registered at the Pediatric Hospital. The girl is under observation.

The under-secretary elaborated on the part of the provincial interior and explained that “in the interior we have a record of a serious motorcycle-pedestrian accident in Villa Berthet, a patient who is being transferred to a pediatric hospital. Also in La Escondida, in the past few days, a man had a motorbike-light pole accident and is being transferred to Perando with a serious head injury.

The official also provided information referring to other types of injuries: “With regard to injuries, we have reports of three patients with knife wounds in the city of Saenz Peña, one of whom is still hospitalized. Perrando Hospital Attacks have been carried out by third parties with only mild features.

On the other hand, the Ministry of Public Health of Chaco also reports that at 12:38 a girl named Gianella was born at the Bicentenario General Güemes Hospital in Juan José Castelli, who is in perfect health with her mother. The medical team in charge of the delivery stated that the birth took place without complications.

Finally, from the health portfolio they report that the Ambulatory Monitoring Unit (Fever Clinic), which operates at the Perando Hospital (Avenida Nicolás Rojas Acosta 245), will be available from 8 am to 6 pm.