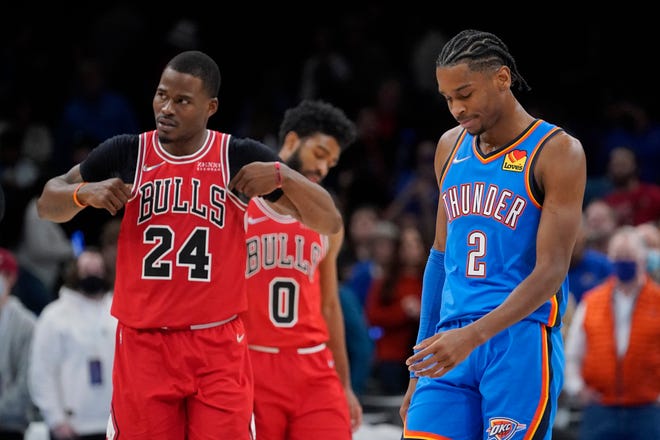 Shai Gilgeous-Alexander took control of the ball and made a dribble move to stun his defender and drew another as the seconds on the third-quarter clock wound down.

The Thunder guard threw a right-handed behind-the-back pass to Mike Muscala who caught it behind the 3-point line.

The 6-foot-11 sharpshooter shot an off-balance 3-pointer that fell through the cylinder touching nothing but the nylon rope.

But Chicago’s Ayo Dosunmu took the ball and flung a shot from near half-court that banked off the glass and in as the buzzer sounded to answer.

It was that kind of night for the OKC. Whatever the Thunder did well offensively, the Bulls would counter with a shot just as impressive in a 111-110 win Monday night at Paycom Center.

The Bulls came in on the second night of a back-to-back after playing at Orlando on Sunday but it was the Thunder who looked sluggish on defense. It took a big fourth-quarter rally where the Thunder outscored the Bulls 29-16 to make it a one-point game. But an SGA setback 3-pointer clanked off the rim with one second remaining on the clock.

“We got stops and we got out on transition,” Gilgeous-Alexander said. “I think those were the keys for the game, and we weren’t doing enough of it up until that point. We turned a switch for sure, just got to figure out how to do it the whole game.”

‘Pushing a bus is not out of the realm’:How the Thunder made it to Cleveland to wrap up a four-game road trip

The Thunder had a really good first quarter offensively with all five starters, Dort, Aaron Wiggins, Jeremiah Robinson-Earl, Josh Giddey and SGA scoring, to put 27 points on the board. But the defense lacked and OKC trailed by seven points regardless of its impressive shooting. The Thunder gave up 35 points in the first half and had to play catchup for the remainder of the game. The Thunder trailed by 10 at the half.

Despite the struggles, OKC made a run in the fourth quarter to shrink the lead to as little as one point with 15 seconds remaining. The Thunder continues to be a team that doesn’t give up. All 12 Thunder players who stepped on the floor on Monday night scored at least one basket.

“We want to be a team,” Thunder coach Mark Daigneault said. “We want the open man to get the shot, we want the open guy to get the ball. And I think it builds chemistry, it builds trust, developing inside of our team and so I’m always impressed by how encouraging the players are with one another in those situations. So I think it’s just a testament to that.”

‘I would like to retire here’:Why Kenrich Williams wants to stay with Thunder past NBA trade deadline

Bulls were without starting guard Lonzo Ball and sixth-man Alex Caruso, who are both expected to miss the next six to eight weeks. Ball suffered a torn meniscus, and Caruso will undergo wrist surgery.

But Bulls rookie Dosumnu stepped up in the star’s absence and put together one of the best performances of his short career. Dosumnu opened the game 8-for-8 from the field and 3-of-3 from the 3-point line for 19 points. Throughout the night, Dosumnu missed just four shots to torch the Thunder with 24 points.

Nikola Vucevic led the Bulls with 26 points while Zach Lavine scored 23, but Dosumnu’s performance was the difference on Monday night.

Giddey was awarded the Rookie of the Month award for the month of December during pregame. He became the second Thunder player to win the award twice joining Russell Westbrook.

The rookie played a productive game finishing with nine points, eight rebounds and six assists. JRE a rookie as well also had a good night. Robinson-Earl turned in 12 points and three rebounds to go along with one of the best blocks this season.

Robinson Earl called it the moment of truth.

“It’s a moment of truth when somebody goes up to dunk and we just make those plays for our team,” Robinson-Earl said. “Just showing that we want to be aggressive and we’re going to battle until the very end and battle in every situation.”

Bulls’ Troy Brown Jr. rose and attempted to dunk over Robinson-Earl at the rim. JRE didn’t back down and jumped with the third-year forward. But JRE didn’t just block the shot, the rookie palmed the basketball and took it out of Brown Jr.’s hand, getting a big reaction out of the crowd and Thunder bench.

“It’s great just being able to bring energy to our team despite we might have just turned the ball over,” JRE said, “or a situation might be happening so anything we can do to just kind of make those plays to turn the momentum around for us is great.”

‘It was a little bit of a perfect storm’:How the Thunder’s first alternate court came together

The return of Billy Donovan

Former Thunder coach Billy Donovan returned to the Paycom Center for the first time as an opposing coach with fans in the arena. SGA ran over to Donovan just before the tip to give him a handshake, hug and smile. Although the Thunder fans’ reaction to Donovan wasn’t as nice. A mix of cheers and boos filled the arena when his name was announced.

Donovan spent five years as the Oklahoma City coach putting together a 243-157 overall record before departing for the Chicago job last year.

Special lawyer asks for information in a hospital complaint