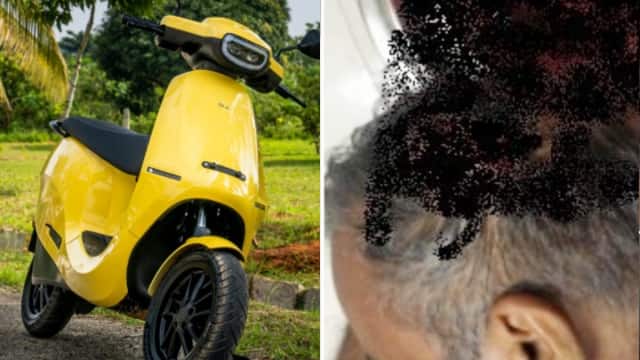 Electric Scooter Fire: The electric two-wheeler (Electric Two Wheeler) continues to catch fire. The new case is of Telangana. Here the battery of the electric scooter of Gurugram based Benling India exploded while charging. Another case is related to Ola S1 Pro. However, there is no case of fire or explosion in this electric scooter, but the accident happened due to a fault in its reverse gear. A 65-year-old man was seriously injured in the accident. Let us tell you in detail about these two cases. First know the case of blast in Benling India’s electric scooter.

Battery of Benling India e-scooter ruptured while charging
This incident is of a village in Karimnagar district of Telangana. According to local police, a man named Egurla Odelu had bought a Falcon electric scooter from Benling India. He charged the battery before going to bed on the night of May 8. Even after a few minutes of charging, the scooter’s battery exploded. However, no one was around during the incident and no one was injured. Part of the electric scooter burned after the blast.

Ola e-scooter’s reverse mode becomes ‘killer’
A new type of accident has come to light due to electric scooter. A 65-year-old man was seriously injured due to a malfunction in the reverse gear of the Ola S1 Pro. This incident is of Jabalpur. A person named Pallava Maheshwari told on Linkedin that his father was parking Ola S1 Pro scooter. During this time the scooter reached a speed of more than 50km / h in reverse mode. His head hit the wall because of the disturbance. He has 10 stitches in his head and his left arm is broken. Pallava has attributed this to Ola’s software.

Read Also:  The big surprise is that this mini car of Renault has sold more than 4 lakhs

Expert explained the reason for the blast in the EV’s battery
Live Hindustan spoke to YouTuber Auto Expert Amit Khare (Ask Karguru) about the EV’s battery fire incidents. He explained 5 reasons why a battery used in an electric vehicle catches fire or explodes. Also, gave the necessary tips on how to avoid it.

1. Melting of plastic cabinet: All the batteries used in EV are coming with plastic cabinet. In this case, when they are hot, they melt the plastic. At the same time, the circuits attached to it also start melting. This increases the risk of fire rapidly. Even though the batteries are fully packed, it still discharges heat. When the battery is hot, the discharge of this heat starts increasing rapidly.

2. Heat sink reduction: Most batteries are lithium ion based. Lithium ions give off more heat. In this case, the top cover of the shell should be stronger. It should use heat sink, but right now battery operators are not using it. The main reason for this is that the battery is swapable. These batteries are transported from one place to another. In this case, if the heat sink in the battery is increased then its weight will also increase. This may cause some problems in lifting it. That is why it has been deliberately kept light.

3. Current to Short Circuit: The biggest cause of fires in charging stations is short circuit. This current is so heavy that if the joint of the battery is not tight then the possibility of short circuit in it increases. The two-wheeler uses a charger up to 7kw. It has about 5 to 7 times more current than the air conditioner used in the house. So many times due to such a powerful charger there is a risk of short circuit in the battery. Our technicians are not ready to handle so much current.

Read Also:  Yamaha MT-15's new Moto GP edition launched in sporty look, with great features the price is so much

4. Battery warming by temperature: The temperature in the country is rising rapidly these days. This is also causing the problem of fire in the vehicles. In an electric two-wheeler, the battery is used under the seat. In this case, when the car is parked in the sun, its body temperature becomes 70 degrees or more. The lower part of the seat is air tight so its temperature becomes the same. When we start the car, it takes more power of the motor to move it forward. This raises the temperature even more. This is why the car starts smelling and sometimes the battery catches fire due to heat.

1. Charge the two-wheeler battery to a place in the house which is the outer area. Do not place it on a cloth or wooden surface.

2. Do not leave the battery on charging overnight. Charge while you are awake. Turn off charging while sleeping.

3. Avoid charging if the e-vehicle gets soaked in water. Apply it on charging even after it dries and cleans well.

4. Do not ignore the slightest smell while driving. Stop the car immediately and open the seat first. So that the heat inside is expelled.

5. Also avoid taking a Chinese manufacturer’s vehicle. Instead go to the cars that are being made in our factory here.

6. Keep car insurance up-to-date. Try to renew it a week in advance if it is about to expire.