NEW YORK._ PRM National Executive Vice President Dr. Eddy Olivares swore in Vice Consul Julián Mateo as the new President of the “Winston Arnaud Guzmán” branch and the other leaders who make up the Board of Directors last night in New York. of the branch on Carter Avenue in the Bronx in a major operation that exceeded the capacity of the venue. 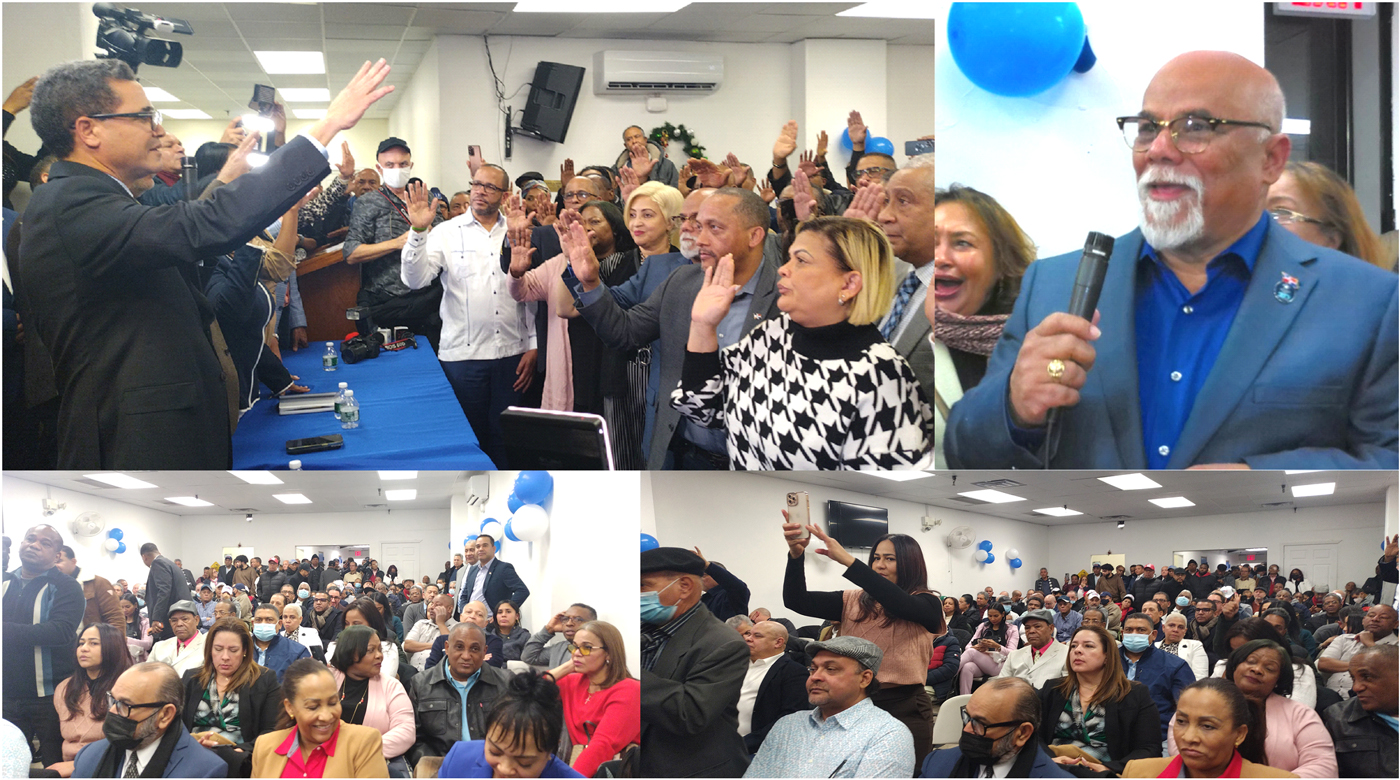 In the act, which began with a religious invocation by leader Ramona Almonte (Monin), Director of Community Affairs of the Consulate General, Olivares announced that with the swearing in of Mateo and his comrades towards the official formation, the Perimeista Unit has been sealed.

He declared the PRM invincible and re-elected President Luis Abinedar in the 2024 elections and warned the PLD that “this will never happen again.”

He said the Peledestas had the 16 years the people had given them to govern and transform the Dominican Republic, but instead they left a country in total disaster.

After making a comprehensive summary of the history of the PRD and PRM, whose parties the late doctor José Francisco Peña Gómez is the historical leader, he said that what will be disputed in next year’s elections is who will finish second. the PLD and the Fuerza del Pueblo (FP), whose parties would wait 60 years in opposition.

Matteo, while thanking his choice as the new president of the branch, announced that the first thing that must be highlighted is the ability of the political leadership of the branch to understand, being the strongest branch abroad, It doesn’t have the empowerment it needs.

“That empowerment starts today with the respect we all deserve. We are committed to each and every one of you and you can be sure that although there are not many beds, there are mattresses. They will all fit”, Mateo assured.

He said that everyone who shows willingness to work will not be spared.

“We’re going to open An inclusive party, no witch here, here is the modern revolutionary party. But… be careful: we’re going to eliminate the word “I” and reinforce the word “we” with a fundamental axis of discipline and action,” the new president explained.

“Here, what I was, what I was a cousin and a friend is over, here everyone is being measured by their work but something I must review today as a commitment : President Fuerte and I went to Santo Domingo to sort out the problems, including the sectoral fronts, the outer sector, which has done a tremendous job and is going to work with us, expanding that action plan and working Doing it”, Mateo said.

He promised, “All the men and women who worked with us will be put on file and we will have to find positions for them and this is not a speech because we have demonstrated it on the ground.”

He warned that networks that “have an account” of discipline, respect and control will be removed.

Mateo took it forward It will make an active party and not of groups and much less of friends and related people sitting at home.

“From now on, the doors of this party are open for those who want to work,” he said.

He highlighted the massive support for the Act, saying that his and his comrades’ swearing-in was overwhelming, with the PRM sending a signal to the Dominican Republic that the Peremistas are united, united and determined to return Abinador to power. are ready for.

Mateo is also general coordinator of the Committee of Dominican Political Parties (CPPD) in New York and party representative to the Central Board of Elections (JCE).

Fuerte synthesized his achievements at Sectional under his direction by handing over the presidency to Mateo.

He highlighted the work of presidents and secretaries of regions representing people, mass fronts, women, youth, taxi drivers and others, organizing an army to win President Abinder in the 2020 elections.

He reported that he leaves a united party with three deputies and deputies in constituency #1 of the United States of America and with finances without any debt.

Fuerte indicated that he was leaving the presidency with great satisfaction, thanking the press, the outside sector and the team of men and women who have achieved, Support for the victory of change.

“We found the party without a single foreign deputy and now, we are leaving three, we found it in opposition and we are leaving it in government and in good standing,” he said.

Fuerte said, “The country needs us to keep Luis Abinader in power, because without Luis, there would be no foreign pensions, medical plans, housing plans and many other achievements for Dominicans abroad.”

“We have left an agreement at the New York branch to seal the unit forever which has been sealed today in the presence of Dr. Eddy Olivares,” he said.

In the act that began with the hymns of the Dominican Republic and the PRM, Sánchez and Rodríguez also spoke, agreeing to highlight the contingent of all comrades in order to achieve the unity that ended last night.

was highlighted The unanimous decision of “La Beba” for the secretary general to give up her aspiration and remain in office for Sánchez was widely applauded by the attendees and she responded with tears in her eyes.

The event was led by Leader Altagracia sellville