Hospital occupancy related to COVID-19 is expected to remain in a “prolonged peak” despite the fact that the Omicron wave in Ontario has plateaued or is in decline, the province’s science table said in new modeling released Tuesday.

Ontario’s COVID-19 Science Advisory Table released its first projections of 2022 on their website one day after the province began to lift public health restrictions.

As a result of a lack of COVID-19 testing in the province, the science table cited wastewater data in making their projections.

“Taking into account the time lag until diagnosis and reporting, the peak of Ontario’s wastewater signal around Jan. 4, 2022 would correspond to a peak in cases around Jan. 11, 2022,” the report said.

According to the wastewater data, between 1.5 million and four million Ontario residents were infected with COVID-19 in the past 60 days.

The science table also noted that test positivity in among repeat testers, workplace environments and hospital admissions have begun to decline. Officials attribute this to the public health measures announced at the beginning of January, including a ban on indoor dining and strict gathering limits.

The modeling says that hospitalizations are expected to “remain at a prolonged peak, except under the most favorable assumptions.” Pressure on intensive care is also expected to be “prolonged.”

Assuming that at least eight million people in Ontario will have received their third dose of COVID-19 vaccine by the end of the month, and that there is a high level of immunity in the community, the province could continue to see over 2,000 patients in hospital in March.

In the worst case scenario, with low levels of immunity, that number could skyrocket to just under 6,000 patients.

Officials noted that an uptake in vaccination and an increase in supply of medical therapies for COVID-19 may reduce admissions.

A spokesperson for the Minister of Health said in a statement that the modeling shows public health restrictions helped blunt transmission.

While we know that the coming weeks will continue to be difficult for our hospital partners, hospitalizations are currently stable and given current trends, we are confident in our ability to ensure capacity so that patients can access the care they need,” Alexandra Hilkene said.

“Ontario is currently trending between the projected best and moderate-case scenario for hospitalizations and we have sufficient capacity to meet such demand. Similarly, the province has sufficient ICU capacity to respond to any scenario outlined in the modeling.” 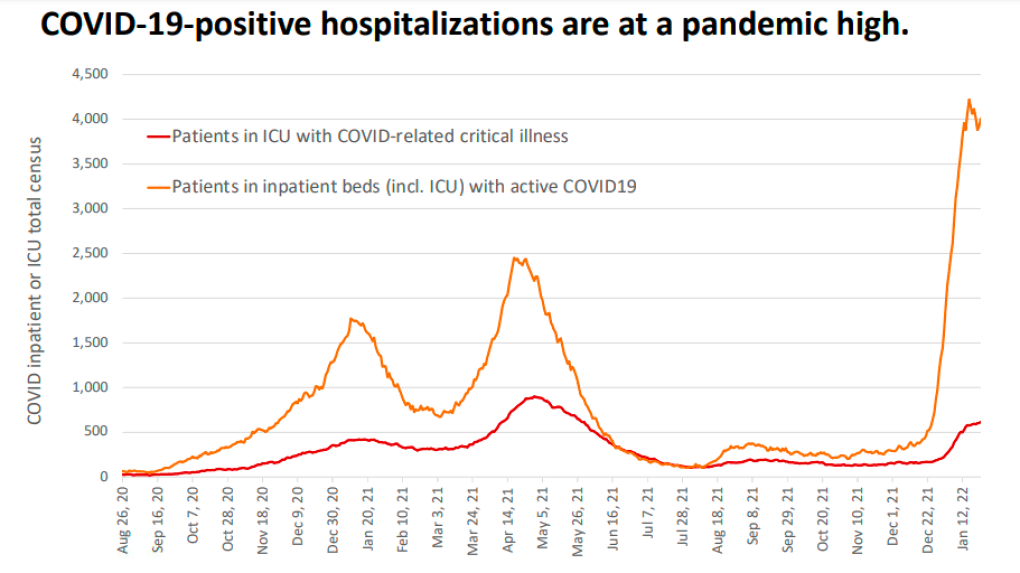 The science table says that during the Omicron wave, more than 450 patients with COVID-19 were transferred to another facility to prevent hospital resources from being overwhelmed.

The science table warned that population-level case counts have not been reliable since the end of December, when the province severely restricted the number of people eligible for COVID-19 testing to those in long-term care and health-care.

While that eligibility has since expanded, the majority of the population still cannot get a PCR test. A PCR test is currently the only way for a COVID-19 case to be counted by a public health unit.

“We have no clear estimates on the spread of SARS-CoV-2 during previous waves beyond identified cases. This impacts estimates of the number of people with prior infection and degree of immunity,” the modeling reads.

“All these factors make it challenging to model the current wave and estimate the impact of re-opening.”

The modeling also suggests that vaccinations are slowing down across all age groups.

Peter Juni, the scientific director of the COVID-19 Science Advisory Table told CTV News that in order to ensure the province’s health-care system doesn’t get overwhelmed is to move carefully during the reopening.

He suggested that the province’s next phase of reopening may need to be delayed a bit.

“But that’s all we’re talking about,” he said, adding that he doesn’t foresee Ontario going into another lockdown. “But we need to learn how to navigate what’s happening.