Premium smartphone company OnePlus is all set to launch its OnePlus 9 series in India next month. OnePlus OnePlus 9, OnePlus 9 Pro and OnePlus 9 Lite phones will be introduced under this series. But before launching, the specification details of these three phones were leaked. This week, the OnePlus 9 features were revealed by the AIDA64 Android app identified by TechDroid. A screenshot of the TechDroid shows the model number of the OnePlus 9 as LE2117. Let me know about the features of these phones. 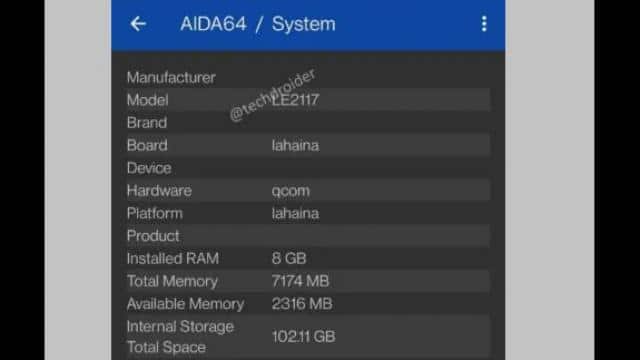 Also read: – Google Map can help you locate your smartphone, whether it is stolen or not, Learn how it works

Speaking of cameras, a screen shot of the TechDroid shows that the phone has a 12MP primary camera. However, information about the camera sensors has not yet been received. However, it is not yet clear which charging technology will be available in these two smartphones. Since these features are found in the AIDA64 application, it is possible that the final product may differ in its specification when launched. We hope that the company will officially announce the specifications of the phone soon.