Opinion: Mark Selby’s brave admission can help others in snooker and beyond, showing it’s okay to not be okay 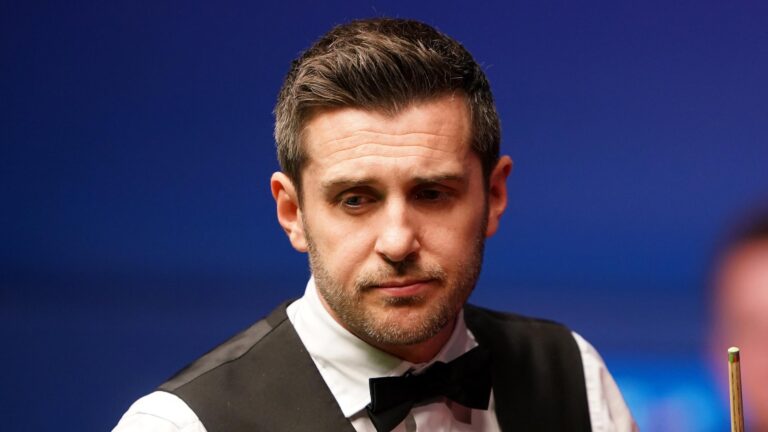 Roger Garrett was never going to be world champion, but he loved snooker and wanted to make a go of it.

In 1995, he found himself stationed 85th in the world rankings and due to play Dave Harold in the last 64 of the International Open in Bournemouth. At the allotted time, Garrett was nowhere to be seen.

His father had traveled with him but knew nothing of his whereabouts. Hotel staff found his cue and dress suit in his room. A television appeal was launched. Eventually he phoned his mother to say he was on his way home. He had qualified for the upcoming Thailand Open in Bangkok but withdrew. He never played professionally again.

A quarter of a century on, the toll professional snooker can take on mental health has come into focus again following Mark Selby’s revelation that he is struggling.

Selby is world champion and world No 1. He has earned millions from snooker, has a big house and nice family life. Depression, like any illness, makes no allowances for any of this.

After defeat in the Masters, Selby tweeted that all was not well. This admission to himself as much to the world was the first step to getting help. He has since begun sessions with a specialist.

Selby’s experience is a worrying trend in a sport in which emotions are naturally repressed. Snooker is perhaps the most individual of all individual sports: endless hours in dim rooms practicing, often alone. The forbidding quiet of the match arena. Long hours of solitude in hotels.

We frequently see sport in terms of its financial rewards, but it can be a lonely existence. There is much time for dark thoughts to fester.

Ronnie O’Sullivan’s history of depression is well documented. His entire career has been marked by wild ups and downs in mood. After treatment receiving shortly before winning his first world title in 2001 he said he felt like he’d been on a “treadmill of turmoil”.

Graeme Dott’s wife, Elaine, realized there was something wrong with him when she returned home after several hours to find him sat in the same armchair as when she left. Dott had not moved all day.

Mark Allen, like many players, found travel to far off foreign parts isolating and sought too much comfort in his own company, which led to some unfortunate tweets and personal unhappiness until he acknowledged the problem.

Selby’s mother left home when he was young and his father did his best to bring him up on his own. Money was tight. They lived in Leicester where Willie Thorne owned a snooker club. They could not afford even the modest table hire fees but Willie’s brother, Malcolm, allowed Selby free playing time if he out helped around the club.

His father died when he was 16, just after Selby had turned professional. Cut adrift, snooker became a sanctuary. He is now a four-time world champion.

That reads like the sort of ultimately uplifting story a Hollywood scriptwriter would turn into cinematic gold, but a voluble section of the internet disagrees. On the increasingly dehumanising 24/7 carousel of judgment that is social media, the mental fragility of sports stars is being put further at risk.

Kyren Wilson lost a match last year and was sent a photograph of a decapitated head. More than one player has had cancer wished on their children. Even when a player wins a tournament they are taunted that it isn’t a big enough title, that someone else has won something better. Players are constantly being told that they are not as good as they think. Not good enough.

We put impossible demands on our modern sportspeople. We want them to entertain us, amaze us, give us our money’s worth. And not only on the field of play. We also want them to be present in our lives, through our smartphones, available on demand whenever we desire interaction.

In this new realm, we want them to follow us, retweet us, acknowledge us. We want them to be human but only in a way in which we personally approve. Their views must be our views. Their humor must align with our sensitivities. When they do not, we turn on them. They must be destroyed.

Shaun Murphy received a torrent of online abuse, including death threats, for stating his opinion that amateurs should not be allowed to play in professional events. He says nobody has uttered a word to his face in the real world.

It isn’t only online, though, where the problems lie. The snooker circuit is largely full of men brought up to believe vulnerability equals weakness. It’s a place of nicknames and banter, of simple solutions and manning up. Selby is saddled with the ‘Jester from Leicester’ tag which almost compels him to play the jolly joker. There’s our Mark, always good for a laugh.

There are still those who simply don’t understand the problem. Even after Selby spoke out there was a minority within the game who claimed he was just upset about losing in the Masters. There is still clearly a long way to go.

“I can accept winning and losing,” Selby said at last week’s German Masters. “It is probably my past experiences and my upbringing. Even though I grieved after my father, I bottled a lot of it up and felt I couldn’t talk about it without getting emotional and thinking of it as a negative, rather than remembering him in a positive way. That is something we are trying to work on.

“There are a lot of highs and lows in snooker and that can trigger emotions. I need to put snooker second, concentrate on myself and try to enjoy it.”

Thankfully, unlike in Roger Garrett’s day, there is now active help available from snooker’s authorities. The World Professional Billiards and Snooker Association have partnered with Sporting Chance, set up by ex-footballer Tony Adams to help sportspeople experiencing mental health issues, and the charity Silence of Suicide.

The welcome change in attitudes was apparent when an official noticed how withdrawn Martin Gould had become at a tournament. He asked him if he wanted to chat, if he was okay. Gould confided that he wasn’t, but help was immediately forthcoming.

Selby is well liked by those within the game, including his fellow players. As a competitor famed for his fortitude in the arena, speaking out so publicly can change perceptions and hopefully help others in a similar situation.

We don’t want any more snooker players walking off into the night, never to return.

If you are struggling with anything it’s okay to talk, click here to find out how to contact a Samaritan.