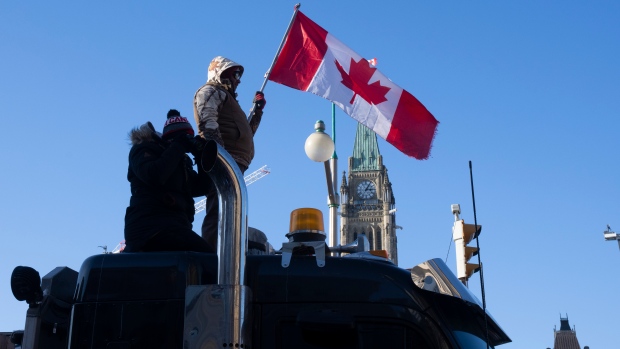 Ottawa is in a state of emergency as the trucker protest continues to paralyze parts of the nation’s capital and frustrated downtown residents take their case to court.

One of the major complaints has been the incessant honking that has been a staple for the protesters, an act that spurred the filing of a $9.8 million class-action proposed lawsuit Friday on behalf of the residents of Ottawa’s downtown core.

The residents are asking for an injunction to be issued to prevent truckers parked on the city streets from honking all day and night. Superior Court Justice Hugh McLean is set to hear the arguments Monday afternoon.

“There are people who have had to evacuate their homes because they can’t stand the noise because it is literally, quite literally, torturous to us,” Li told CTV News Channel on Monday. “And we are not going to stay quiet anymore because people need to understand the real damage this is doing to real people.”

Li said she took action because she wanted her community to be heard, and that while she “understands that not everyone is a bad actor” in the convoy, their occupation of the streets is “creating the environment for hate, violence and a general sense of unsafety [sic] and fear to accumulate.”

“The residents of Centretown don’t deserve to be collateral damage in this demonstration,” Li said.

Speaking directly to the “Freedom Convoy,” Li acknowledged they have every right to protest, but said their actions are hurting businesses, residents, animals and children.

“There is a way to do a protest and this, quite frankly, is not it,” she said. “I have witnessed countless violations of the law, and a lot of individuals just act with utter impunity and with no respect to the residents.”

Paul Champ, an Ottawa lawyer who is representing Li and the other residents in the class-action suit, told CTV News Channel Monday that the suit is really focused on the trucks’ air horns.

“On the ground it’s about 100 decibels, and in your apartment you’re looking at 95 to 90 decibels which is basically like having a lawn mower running in your living room all day,” Champ explained. “It’s torture for the downtown residents in Ottawa.”

Champ said the lawsuit centers on the concept of “private nuisance,” in which others’ actions affect the complainants’ ability to enjoy and use their private property.

“There is precedence on this that for loud noise going for prolonged periods in a day, an individual can get several hundred dollars per day of sound and that’s what we’re seeking on behalf of the downtown residents,” he said.

Champ said Monday’s hearing is to seek an injunction to stop the horns immediately, which gives the police more powers to address the issue.

“This protest has taken on a completely different dimension, it stopped being a protest a long time ago,” Champ said. “Downtown residents are being harassed in the street, businesses are being closed because of the harassment, there is safety issues and these horns are just really creating a completely unacceptable and intolerable situation.”

On Monday NDP Leader Jagmeet Singh called for the House of Commons to hold an emergency debate regarding the trucker protest, saying in a statement that the situation in Ottawa has reached a “crisis point.”

Ottawa Mayor Jim Watson told CTV’s Your Morning on Monday that the state of emergency declared on Sunday offers “more flexibility” for city staff to get equipment and supplies without going through extra processes.

“It helps administration do its job, and helps the police do their job,” Watson said, adding that he was happy to see the police be more “proactive” Sunday night. “We’re not interested in making those people comfortable who are illegally blocking city streets.”

“This group says they’re all about freedom and against lockdowns, well they have created a lockdown in our downtown core,” Watson said. “Our number one priority is to end this thing peacefully.”

Watson said the city will be bringing in more police and resources to end the demonstration in the coming days.

Sunday night, the Ottawa Police Service moved in a show of force to cut off fuel supplies from the “Freedom Convoy” participants, seizing more than 3,000 liters of fuel, according to protesters, being stored in a parking lot. Officials had previously warned the public they could be subject to arrest and charges for bringing fuel to the demonstration.

The police reported that seven people were arrested and more than 100 tickets were issued by Sunday evening for offenses that included mischief, driving while prohibited, excessive honking, not seat belts, having alcohol readily available and mischief relating to property damage.

There are more than 60 criminal investigations related to the trucker convoy, primarily for mischief, threats, hate crimes and property damage. More than 450 tickets have been issued since Saturday morning.

Former RCMP officer Calvin Lawrence said the more “boots on the ground” Ottawa Police has to deal with the convoy, the better.

“The strategy might be to cut off their fuel supplies and their ability to function everyday doing the same thing without approaching them directly,” he said on CTV News Channel Monday. “If you cut off the fuel supply and logistics it makes it harder.”

When asked if there is a risk of residents taking matters into their own hands regarding the convoy due to frustration with how the police and city officials are handling it, Lawrence said it’s a “possibility.”

“This isn’t a demonstration this is an occupation…some people just might take matters into their own hands,” he said. “If the police are not being seen as able to take care of this in a timely fashion, that is a possibility.”

The trucker convoy protest has been described as a “siege” an “occupation” and “out of control” by Ottawa officials, with an estimated 5,000 people and 1,000 trucks and personal vehicles joining the protest on the weekend.

Several other protests took place across the country in support of the main convoy in Ottawa.

Associate professor of international affairs at Carleton University Stephanie Carvin said the pressure created by the protests is not going to see provincial or federal governments “simply drop mandates.”

“Really it’s not entirely clear where this goes,” Carvin said on CTV’s Your Morning Monday. “They have tremendous amount of support online for these protests, people on their Facebook pages cheering [them on] from Europe…I don’t think these protests are going to lose their motivation.”

Carvin cited Ottawa Police Service Chief Peter Sloly’s estimation that these protests could go on for “months,” and that even if the police clear the convoy out from Ottawa, the truckers will attempt to come back multiple times.

“I do worry that as the police move to cut off supplies…we could see frustration boil over,” she said, adding that the organizers seemed “shocked” in a livestreamed press conference on Sunday that police were moving in and seizing fuel.

A counter protest at Ottawa City Hall took place on Saturday, with demonstrators calling for the convoy to go home.

Ottawa city council will also be holding a meeting Monday afternoon to discuss the convoy, including talk about raising the fines for excessive noise complaints.

The main organizers of the convoy are still determined to stay until all COVID-19-related mandates are lifted, with former RCMP officer Daniel Bulford, who acts as the convoy’s security, issuing a video statement to convoy participants, shared on TikTok, to “ hold the line.”

Despite their more than $10-million fundraiser being removed from GoFundMe, the truckers are still fundraising through other online platforms, including bitcoin wallets.

,
With a file from CTV Ottawa