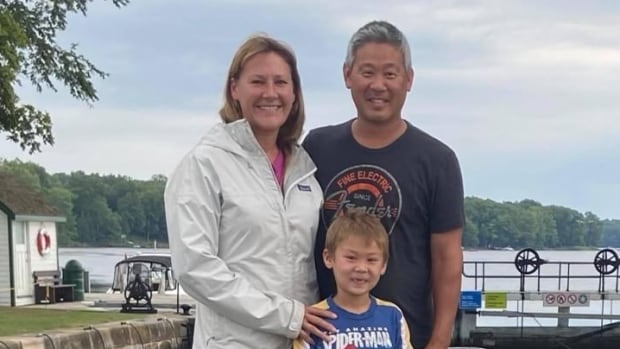 When Steve Hamre wanted to play a song on guitar but didn’t know the notes, he just had to dial up his friend Rob Hayami for help.

“I’d call him up and say ‘Hey Rob, listen to this song, what are the chords?'” the 50-year-old recalled. “He had an ear for music. He could play anything.”

He smiled as he said it, but for the past few days, Hamre has found songs he hears on the radio bring a bitter reminder that his good friend is gone.

Friends of the 49-year-old Ottawa man say he was a victim of the deadly derecho windstorm that slammed into Ontario and Quebec on May 21, leaving destruction in its wake and tens of thousands without power.

At least 10 other people died as a result of injuries suffered that day, while another person was killed the day after by a falling tree branch.

Hayami loved hockey, music and golf, according to Hamre. He said his friend was out at Cedarhill Golf and Country Club with his eight-year-old son Owen when the storm hit.

They saw dark clouds coming and were headed back to the clubhouse when the roaring winds toppled a tree onto their cart.

Hamre said he was told Hayami was pinned. An obituary on the Tubman Funeral Homes website says he died Wednesday at the Ottawa Hospital’s Civic campus, surrounded by loved ones.

He leaves behind his son, his wife Kristine McGillivray, his two brothers Geoff and Steven and his parents Hiroshi and Jane.

“It feels like a nightmare, it doesn’t feel real,” said Hamre. “But unfortunately, we’re not going to see Rob again.”

No longer there to lead songs

Jack Pelletier shared an emotional message of mourning on Facebook Thursday, describing himself as a “best friend” to Hayami, before quickly adding he’s “far from being his only ‘best’ friend.”

Humility, kindness and humor were just a few of the words he used to describe him, adding he and others had spent the past three days in a “constant flood of memories and tears.”

One group of friends had gone down to the hospital a few days before Hayami’s death, Pelletier said, just to be near him.

“A few of us sat in the parking lot with our guitars,” his post read. “I could feel Rob was there a bit, but he wasn’t there physically to lead the songs anymore.”

Hamre is missing the music too.

“He was an awesome friend,” he said of Hayami. “One of the best guys you could ever know.”

He grew up with Hayami in Orléans and said his phone has been flooded with people sharing stories and photos — bringing back moments he didn’t even remember.

In each one, they’re standing side by side.

“He’s the type of guy that you walked in the room and he’s always smiling, open arms to everybody,” said Hamre.

“He’s left a lot of people behind.”

Hamre said a large group of friends will always be there for Hayami’s family, honoring the many relationships he built by ensuring those he loved most are cared for.

Owen is already carrying on some of his father’s legacy by playing the piano, he added.

“I hope he gets the ear the Rob had for music.”