Ottawa police say a new “integrated command center” with the RCMP and OPP will allow them to better respond to the occupation that has occupied Ottawa’s streets for a third weekend.

“We expect the ICC to significantly increase the capacity of our police service to deal with the current situation in our city,” Ottawa Police said on Saturday evening.

“The ICC will allow us to make the most effective use of the additional resources that our police partners have provided us.”

Calling for an end to the COVID-19 vaccine mandate and other public health measures, nearly 4,000 protesters again gathered on Parliament Hill and the streets of the parliamentary constituency on Saturday.

A group of people removed the security fence around the National War Memorial and residents reported sounding horns and hearing loud music during the day. A huge music stage is set up in front of Parliament Hill, while a hot tub and a bouncy castle are seen on Wellington Street. Graham Richardson of CTV News Ottawa reported on Saturday evening that a DJ had been allowed to steer his truck back to the area of ​​Rideau and Sussex Drive.

Police on Saturday reported a convoy of 300 vehicles and a 20-km-long car convoy from Quebec, disrupting traffic in the national capital region.

Earlier in the day, police said they were waiting for reinforcements to arrive to implement “their plan to end this illegal occupation”.

“Overnight, the demonstrators displayed aggressive behavior toward law enforcement, including refusing to comply with instructions, lashing out at officers, and otherwise thwarting enforcement efforts,” police said in a statement.

“We have a plan to end this illegal occupation and wait for the reinforcements necessary to do so.”

Many businesses downtown are closed due to the protest, including the Rideau Center. Farm Boy on Metcalf Street closed early Saturday afternoon as protests escalated.

Farm Boys in downtown Ottawa decided to close their doors as protesters grew in numbers. The man in the vest says that they are shutting down because there are young workers inside who feel uncomfortable. Other businesses choosing to stay open are filling up with people without masks. pic.twitter.com/RmtD3KRpe4

Two councilors are calling on police and governments to do more to end the 16-day protest that has forced the closure of streets and businesses in the city’s main part.

“Prime Minister: The federal government must immediately provide the 1800 resources requested. You asked the city to ask. We did. You have to deliver. Take control of your capital,” says McKennie wrote on Twitter.

“Mayor Watson: The city of Ottawa is paralyzed and unable to stop and end the occupation. Place a leader who will implement all necessary measures to end it. Take control of your city.”

Count Jeff Leiper is calling on Ottawa police to “shut down the fun fair.”

Leiper said on Twitter, “The siege area has been allowed to be more welcoming to occupiers rather than less. @OttawaPolice, as long as they are embroiled in the city, the whole city is feeling the chaos and no one else.” Not safe either.”

Ottawa police say 140 criminal investigations into the protests are ongoing. By 10:30 am on Saturday, the police had arrested 26 people, while police and bylaw service officials had issued 2,600 tickets.

Police also say they are working with Ontario’s Ministry of Transportation on a truck violation initiative, which has so far resulted in three vehicles being taken out of service and reported for violations, such as document offenses, lapsed inspections and daily log violations. 10 charges have been levied for the issues. ,

Premier Doug Ford has declared a state of emergency, saying it will give officials more tools to help stop the “illegal occupation of Ottawa”. According to the premier’s office, the provincial emergency measures went into effect on Saturday morning.

“The new emergency measures will begin to be implemented once the province is formally implemented,” police said on Saturday.

Earlier this week, the city sent a request to the federal and Ontario governments for an additional 1,700 police officers and 100 civilians to assist Ottawa police in ending the demonstration.

The City of Ottawa will also seek an injunction to address “major” bylaw violations in the so-called “Red Zones” on Wellington Street and Downtown Ottawa.

Thousands took part in a community solidarity march to express their protest against the “Freedom Convoy” demonstration, four kilometers from Parliament Hill.

“It’s time to go home. I want my city back, I want my peace,” said Erin Pallard.

Pallard says he is running in support of workers who have lost income as a result of the convoy occupying the main part of the city.

“Workers can’t go to work in the city and people are bullied. The convoy is supposed to be about freedom.”

Count Sean Maynard said on Twitter that in March residents of Ottawa “expressed outrage over the handling of the crisis and rejected the argument that this convoy is about ‘freedom’ the way they have treated our residents, our schools and workers.” dealt with.”

Following the meeting in Lansdowne, a community solidarity march went down Bank Street.

“I think it’s really important to confront this kind of hatred in our city,” said a person taking part in the march.

As the group was walking on the streets, they raised the slogan, “Who is the community? Our community! Who are the streets? Our streets.”

Whose streets? Our streets!

Let’s keep organizing such activities, but with mutual aid such as safe walks, safety and checks of our neighbors and financial support for workers and businesses.

stronger than us #Ottawa Business, pic.twitter.com/KZD0dNaDTU

Read Also:  Carlos Alcaraz and Daniil Medvedev will fight in Canada after the defeat of Rafael Nadal

As word of fines of up to $100,000 for blocking vital roads loomed under Ontario’s state of emergency, protesters said they had no plans to leave. 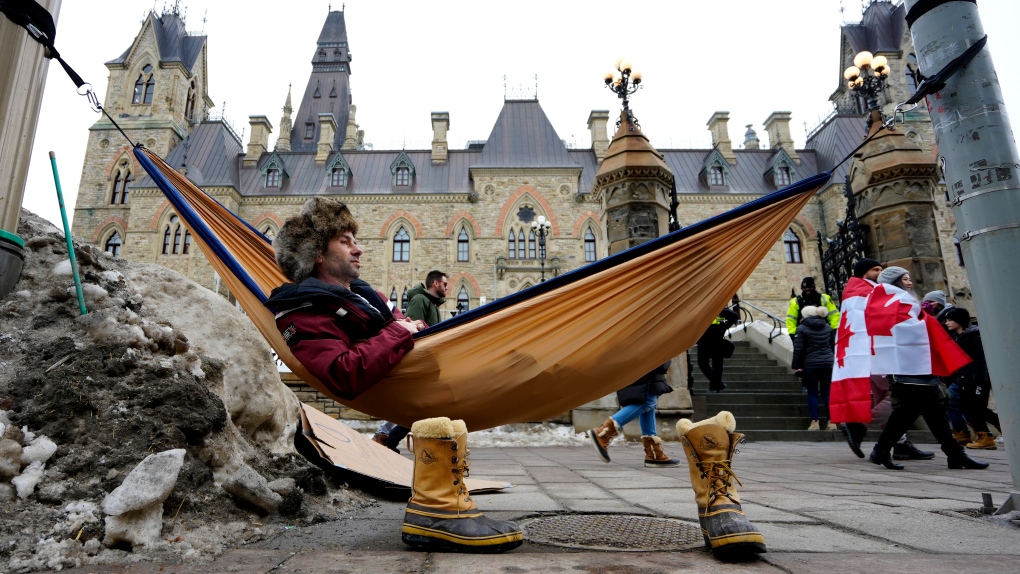 A man sits in a hammock outside the West Block on Parliament Hill, the 15th day of a protest against COVID-19 restrictions that developed into a widespread anti-government protest in Ottawa, Friday, February 11, 2022. (Justin Tang/Canadian Press)

A man sits in a hammock outside the West Block on Parliament Hill, the 15th day of a protest against COVID-19 restrictions that developed into a widespread anti-government protest in Ottawa, Friday, February 11, 2022. (Justin Tang/Canadian Press)

“These scare and scare tactics are not going to work, we are here for the long haul,” Daniel said. “You have to throw us into oblivion and put us all in jail, because we’re not going anywhere.”

Steve has been in performance since day one.

“Why do people get a ridiculous amount of money when you can just lift the mandate.”

The city of Ottawa is seeking an injunction from the courts to block noise, passivity and fireworks in the performance area.

On Friday, the city’s legal counsel appeared before the Ontario Superior Court of Justice to seek an injunction to address “evident and repeated evidence of violations” arising from the ongoing protests. Residents have complained of honking, laziness, fireworks and other issues during the 16-day protest.

“This action is an attempt to prevent the widespread disregard for the rule of law and for municipal bylaws designed to promote the health, safety and well-being of residents and visitors, observed by many involved in the demonstration,” the city said. Solicitor David White said.

The council will learn more about a possible injunction on Monday.

Ottawa police have warned that highway off-ramps, roads and inter-provincial bridges will be closed sporadically this weekend due to protests in Ottawa.

The lanes on the McDonald-Cartier Bridge will remain closed until 6 a.m. Monday.

Alexandra Bridge is closed to vehicular traffic throughout the weekend.

The Portage Bridge is closed, except the lanes leading to the south are open to essential workers.

The RA Center is closed on Saturdays and Sundays due to the ongoing demonstrations in Ottawa.

The RA Center said in a statement on its website, “Through media and social media posts, we have learned that RA has been identified as an unapproved staging location for the Trucker Convoy (known as the Blue-collar Convoy). has been recognized.”

“This unauthorized activity has prompted us to take extraordinary measures to close and secure the RA Center and property on Saturday, February 12 and Sunday, February 13.”

Regular RA events, activities and services will resume from Monday.

The parking lot is closed with a cement barrier.

With files from Natalie van Rooy of CTV News Ottawa