Pakistan to seek deepening of ‘critical’ ties with US 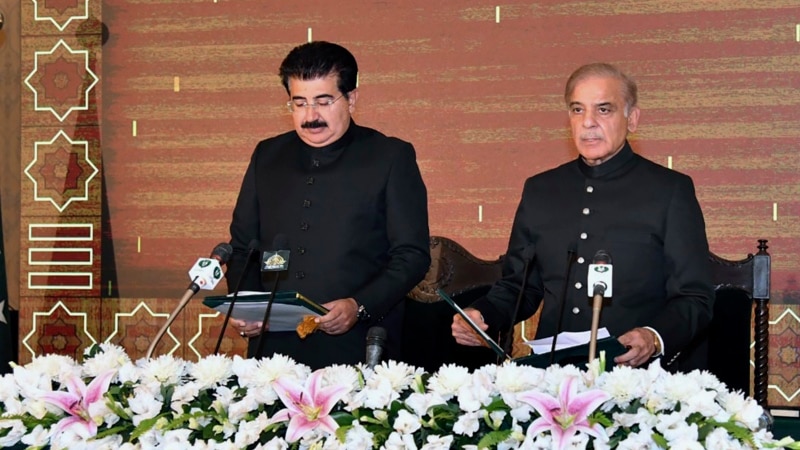 Pakistan’s new government on Tuesday said it would hold “constructive and positive” dialogue with the United States to promote the “common goals” of regional peace, security and development.

“We welcome the US’s confirmation of its long-standing relationship with Pakistan,” Sharif’s office said on Monday in response to White House press secretary Jen Psaki’s remarks.

“We look forward to deepening this important relationship on the principles of equality, mutual interest and mutual benefit,” the Pakistani statement said.

On Monday, Psaki said the Biden administration supports “peaceful upholding of constitutional democratic principles” and does not favor one political party over another in Pakistan.

“While we value our long-standing cooperation with Pakistan, we have always considered a prosperous and democratic Pakistan important to American interests,” he said.

Saki said the “long, strong and lasting” relationship would continue in Islamabad under the new leaders. He declined to say whether Biden has any immediate plans to speak to Sharif.

Islamabad’s traditionally turbulent ties with Washington suffered a setback under Khan, who took power in 2018 as the head of a coalition government with a low majority in parliament.

During his nearly four-year tenure, Khan has consistently criticized Washington for a flawed war in neighboring Afghanistan that ended last August.

In the weeks leading up to his expulsion, Khan repeatedly alleged that the US colluded with his political opponents to topple his government to punish Pakistan for moving closer to China, and especially Russia.

Washington has denied the allegations, and so has the Pakistani opposition.

Analysts say improving ties with the US will be a top priority for Sharif, but domestic political and economic issues will keep him busy.

Maleeha Lodhi, former Pakistani ambassador to the United Nations and the US, did not expect an immediate foreign policy initiative, saying the new government would not have much time as the next election is due in October 2023.

“The priorities of the Sharif government will be domestic, primarily tackling the challenge of a crisis-ridden economy plagued by inflation and the need to finance the growing current account deficit,” he said.

Lodhi said he hoped Pakistan’s ties with China and Saudi Arabia would strengthen under Sharif’s leadership. He said efforts could be directed towards improving relations with the US and the European Union, which are the two biggest destinations for Pakistani exports.

“But before engagement with the US can take place, the government would like to put to rest the allegation of foreign conspiracy leveled by Imran Khan in a closed room of Parliament’s National Security Committee to investigate the allegation, which the new prime minister pledged. has to call,” she noted.

Khan said he had left behind a secret diplomatic message from the Pakistani ambassador to Washington that substantiated his allegations that the US was behind the “foreign conspiracy” to topple his government.

The ousted prime minister and lawmakers from his party resigned from parliament in protest of Sharif’s election, and Khan is set to address a series of public rallies on Wednesday to demand early elections.

The governments of both China and Russia on Tuesday congratulated Sharif on his election.

The Russian embassy in Islamabad said in a tweet that Putin “hoped that Shahbaz Sharif’s activities would contribute to the further development of Pakistan-Russia cooperation.”

The Russian Foreign Ministry also accused Washington of being behind the no-confidence motion against Khan, saying he was being punished for his visit to Moscow.

Sharif on Tuesday also contacted India’s rival, expressing his desire to improve relations between the two nuclear-armed countries, which have gone to war several times over the disputed Kashmir region.

“Pakistan seeks peaceful and cooperative relations with India. Peaceful resolution of outstanding disputes including J&K is inevitable,” Sharif tweeted in response to the wishes of his Indian counterpart Narendra Modi.

Modi congratulated Sharif on Twitter on Monday. The Prime Minister of India said, “India seeks peace and stability in a terror-free zone, so that we can focus on our development challenges and ensure the well-being and prosperity of our people.”

Kashmir has sparked two out of three wars between India and Pakistan since it gained independence from Britain in 1947. The divided territory remains a primary source of bilateral military tension, as both claim it fully.

Relations between India and Pakistan fell to a historic low under the leadership of Khan, who regularly compared the Hindu nationalist government led by Modi to the Nazis.

The two countries came close to another war over Kashmir in February 2019, and bilateral tensions escalated months later when New Delhi scrapped the decades-old semi-autonomous status of the Indian-controlled part of majority-Muslim Kashmir, leaving Khan to Inspired to intensify his criticism. ,

Shahbaz’s elder brother, former prime minister Nawaz Sharif, had good relations with Modi and hosted him at his residence in Lahore when the Indian leader made a surprise visit to Pakistan in December 2015.

Analysts are skeptical about a major turnaround in bilateral ties, citing the limited tenure of the new Pakistani government and the easing of tensions over Kashmir.

“New initiatives with India are unlikely as the life span of the government until new elections is uncertain, but efforts to de-escalate tensions are possible,” said former ambassador Lodhi.