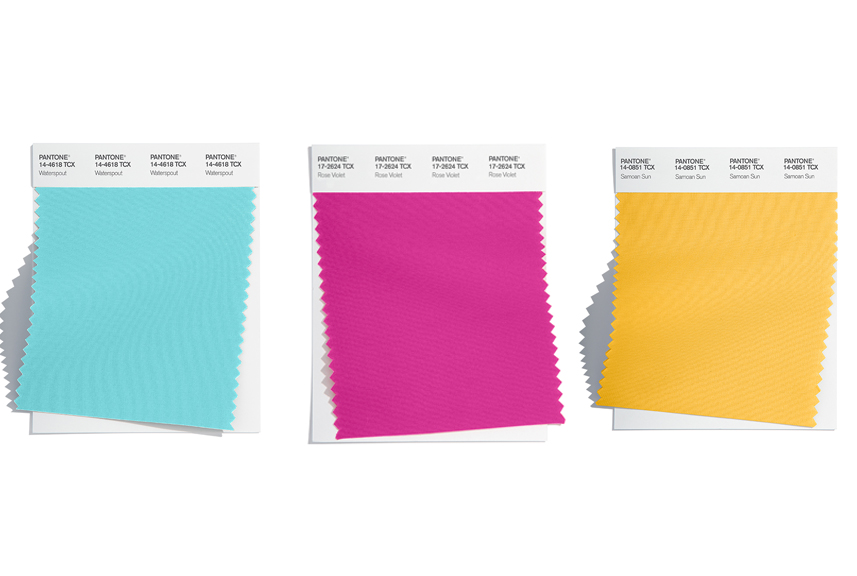 Just as much of the world teeters between envisioning exuberance and calm, the Pantone Color Trend Report for New York Fashion Week fall 2022 delivers shades for both mind-sets.

As pandemic restrictions are easing and many countries are opening up again widely for business, the anticipation of getting back to some semblance of activity is evident in the colors. High-energy shades top the list of the 10 standout colors with the fiery red Lava Falls, the glowing yellow Samoan Sun, an energizing Orange Tiger and a near neon pink Rose Violet.

The roller coaster of emotions that millions have experienced due to COVID-19 are evident in this season’s palette. “On one hand, we want rest and relaxation, but on the other hand, we want to be sure something that is going to get us up-and-out and moving,” she said. “Everybody knows what it feels like to have been sequestered for so long. Last year, we felt that we could start going out to do the things that were so-called normal. Then we had another wave with Omicron, which was so disappointing. People just feel like — give us another jolt of energy. Those highs and lows we were experiencing due to all of the events around us [have led to] almost contradictory yearnings,” Eiseman said, adding that choosing colorful clothing can almost fool oneself into being energized.

Pandemic aside, upswings in interest in outdoor activities, gaming, near-constant digital lives, animation, immersive art exhibits like the Van Gogh Experience are impacting consumers’ choice of colors. With digitized colors often being more intense than textiles seen in real life, the absorption of such vibrant shades is making people want to infuse their wardrobes with similar jolts of color, Eiseman said. “To make that transition from the digitized world into — I won’t say ‘the real world,’ because that’s becoming part of our real world for sure — can mean choosing a different textile, a cotton or a silly print. With people being surrounded by all of these new technologies, they want a piece of that.”

However dry the ongoing sourcing problem and shipping delays might seem, they are also rocking the color world. With first choices for fabrics and other materials routinely being shelved due to transportation and availability, designers are increasingly rolling with second or third choices, which has led to a greater willingness to experiment with colors. Eiseman said she will be opening a talk at next month’s International Home and Housewares show by acknowledging how the sourcing issues are a factor. “Designers have to be thinking about this. It’s all part of deciding which colors you will be using,” she said. “It doesn’t run against the meaning of each color. But that practical aspect of what’s-going-to-be-available-to-me does play into it,” she said.

Beijing Olympic fans may associate this orange-y red with the flag of China or the controversial layered-up Lululemon uniforms of Canada’s national team. Winter Games coverage is “absolutely” reinforcing the power of color, Eiseman said. “You know what a stir the Canadian uniform caused with the bright red puffer jackets and the vests on top of the jackets and the puffy scarf on top of that. That was a big story for several days,” she said. “I thought wow that is an indication of the power of color. And people are interested. They may not be able to attend, but they will watch and will get some inspiration from that.”

Creatives and consumers alike are not about to let weather patterns or moods dictate their color choices. Cheerful, enlightened Samoan Sun is one that is prevalent well beyond smiling — or crying — emojis. The new Jean Patou handbag collection is already using it.

Another example of how new fashion seasons are no longer defined by staid colors.

Designers and shoppers are more inclined to not be mired in expected traditional choices. If you want to wear a bold pink, the thinking is go for it, Eiseman said. Sandra Bullock dons a Rose Violet sequined pantsuit in the new flick “The Lost City.” Lil Nas X wore it first though at the 2020 Grammys.

Inspired by the rainforest and not Jeff Bezos’ behemoth corporation in Seattle — this lush color is meant to relay a sense of being outdoors with the grass beneath one’s feet. Colin Locasio already added it to his fall collection. Environmental concerns are not going away either, and this is yet another reminder that we need to be mindful of the destruction of nature, Eiseman said.

Like the multisensory Amazon, this floral pink is meant to resonate on different levels. Vanessa Kirby chose a gown in this soft shade for last year’s Oscars.

Cleansing and refreshing, this blue is a few notches up from a pastel. Disney fans and Loewe shoppers alike will love it. Arias’ “Her Mirroring” collaboration with Anne Klein opted for Waterspout, as has Tadashi Shoji. Meghan Markle is an advocate for this blue, too.

Coffee drinking has become a pastime around the globe — more than 166 million bags were sold last year. Designers and Pantone understand that a name can take you places, and one that carries an added punch of aroma is all the more inviting to shoppers.

Stargazing has gained traction thanks to the James Webb Space Telescope and self isolators looking for some after-hours socially distanced activities. Kim Jones is among the fans of this deep blue.

Cocktails are back in a big way, so why not splash this green tone into the wardrobe?

Aside from having names that reinforce the transportive powers of color, these seasonless and versatile basics won’t fade like a passport.

This soft white isn’t just a favorite with bridal designers like Vera Wang and Pronovias — it can be found in Badgley Mischka’s new collection. This is also a go-to choice for future Queen Consort Camilla, Duchess of Cornwall.

Slightly understated and calming, this basic has already been infused into Peter Do’s new collection, as well as Overcoat’s and House of Aama’s. Burberry needs no reminder about Autumn Blonde’s lasting appeal.

Iceland overnights for the Northern Lights might not yet be on the calendar for many travelers, but this cosmically deep blue is at the ready.

Another indicator of the appeal of the evergreen, this earth-infused tone can be found in myriad brands including Patagonia and The North Face.

Knowing that pandemic living amounted to hunk, drunk or chunk for many housebound quarantine-ers, this subtle gray shade’s name is a wink at the exercisers of the world. Thom Browne is always on board with grayness in fashion.