Parade of Happiness: Between Culture and Resilience in Florida, Valle del Cauca It was on December 31, 1952, on a dusty street of Barrio La Esperanza in Valle, Florida, that a group of friends gave life, without realizing it, to the most traditional, joyful and cultural event in this municipality: The Parade Off the happiness.

It all began when Tulio Mosquera ‘Camelon’, Luis Rebolledo ‘Chulavita’, Jorge Reyes ‘Mambo’ and José Hermes Aramburo mixed wisdom, mischief and costumes to add to the joy of their neighbors in a New Year’s Eve celebration .

“They started dressed as devils, bears, fathers and a man asking for coins, they walked along Calle 10 between Carreras 23 and 27, laughing, the sounds of toys, the events and the pilgrimage of the inhabitants of the sector” said Douglas Rojas, one of the parade’s organizers.

The event was initially known between three and four blocks away, but due to the folklore living in the area, it became famous in the largest neighborhoods of this municipality, where traditional families were integrated until it became a major event, Which is called ‘La Comparsa’. La Esperanza neighborhood.

“One who was born in a neighborhood was so well received as a collection of friends, that it ended up infecting Floridians, giving rise to Ponton, Caraballi, Figueroa, Charrupi, Landzuri, Lujan, More comparisons were made to traditional families such as the Montaños, Bolaños, González to become a tour of the whole municipality … which ended up as a parade of joy” mentions William Vilada, a member of the parade’s board of directors.

“When it started, it was something very superficial, there were some people in disguise walking around Barrio La Esperanza. Nowadays it is more cultural, showing local expressions and the cultural identity of the neighborhood and the Floridians who integrate it. trying; that is why it is said that the parade is a meeting of traditions and customs, more than one festival” mentions Rojas, pointing to the development of an event that has gained social recognition and the city council, which has declared it a cultural heritage. Florida in 2018.

For Douglas Rojas and William Vilada, one of the main changes the parade underwent is logistics, as it went from a two-block tour starting at eight in the morning to a tour lasting more than five blocks. hour, more than 20 compasses pass through the main streets of a municipality that today has 35 neighborhoods, 12 improvements, and more than 70,000 residents.

The change in language is also another big step, as it is not necessary to ban the use of flour and water during the parade. Rojas explains that to avoid chaos, “logistics that promote respect were created, making it easier for business to avoid physical harm between participants and materials, which have been the largest sponsors of the event.”

Similarly, awareness has been created among Floridians about the essence of the parade, “people are beginning to understand that it is a cultural event, it is not just dressed up to be it, but it is showing that culture and joy.” is what unites us,” he clarifies Villa.

The knowledge and flavors that give life to the traditional drink of this event, baptized by its creators as “el guandolo”, are also integrated into the parade. Carlos Emil Calero, Tulio Mosquera and José Hermes Aramburo combined their knowledge to create a preparation of panela and wine, which is fermented underground for several days, giving its maturity and flavor more, the secret touch With, exclusive to its creators. This drink is given to participants to maintain energy and enjoyment during the tour.

Currently, according to Douglas Rojas, “the maturing time of guandolo has been shortened, so that people do not become intoxicated, but are used as an aperitif, yes, all this for children and grandchildren.” is done under the patronage of the creators of the drink, so that the tradition continues without removing or adding the secret touch”.

hard times and glory in this tradition

Florida, a municipality in the southeastern corner of the valley, was known for incursions by the extinct FARC, M-19 and Jaime Bateman Cayon guerrillas and paramilitary presence during the late 90s and early 2000s. Despite this, his people never lost their strength and always opposed violence, betting on peaceful and healthy coexistence, reflected in their popular parade on 31 December.

In the last month of 2001, after facing one of the most violent guerrilla takeovers; which affected Florida’s commercial and banking sector; “The organization didn’t close, it continued as it was, and there were many messages for takeover, with banners like ‘No to Violence’ … It was a complete success, we took it out of the stadium, because that year there were more than 5,000 people reunited ”explains William Vilada, who highlights this activity as a sign of Florida’s peaceful identity.

Although the parade seemed to be a ‘cultural snowball’, it had setbacks which meant leaving the streets of Florida without a passage of the compass for two seasons. The first was between December 2012 and 2013, when “many of the organizers left Florida for work reasons abroad or for another city,” explains William Vilada, adding that after returning they intended to continue the tradition. decided and everything “returned to the same merriment and joy, even more forcefully”.

For its part, the second season took place at the time of the pandemic, which was directed “virtually for reasons of health and care” through the Facebook profile of the Parade of Joy and with the support of Florida Page Digital. Is disseminating images and videos, keeping those who cannot be present engaged in the fun” commented Vilada.

Why has this tradition survived? 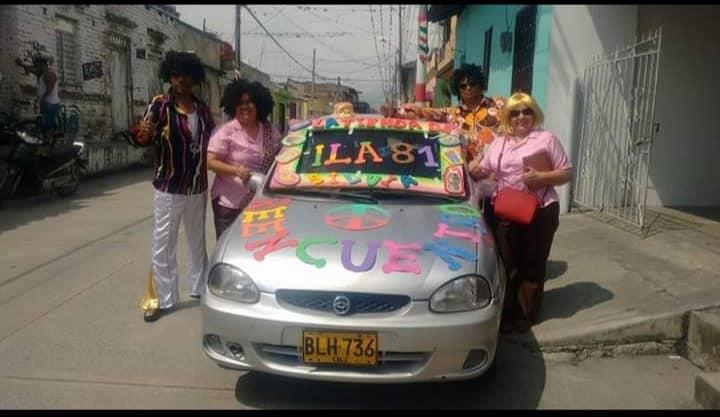 One of the rules of the parade is not to mix it with politics or personal “because it is always intended to show the beauty, the joy of the municipality, the brotherhood of sharing, it is not a scene of protest or politics, or any The other situation that the municipality has been around for a long time is to celebrate and we all understand it as such, for example there was a time when there was a disagreement with a service provider company and they went into what is known as a casket protest. wanted and we said it was not the time or the place, they understood it and we went on our way” recalled Douglas.

Another reason for the prevalence of parades is summarized by William Vilada: “The role of children is fundamental, because they are the ones who guarantee that the tradition is preserved, that they reform and change, because tomorrow They will be the ones in charge of organizing and improving the current conditions of this parade. For this reason, year after year they are the most attractive and their effort and dedication are rewarded.

For this year, the organizers comment, there will be more than 30 troupes that will take over the Joy Parade, led by the people of Barrio La Esperanza, where many people living abroad will return to their area and to meet the joy. The march will make several stops, so that people who have not seen each other for a long time are reunited amid laughter, costumes and a good drink of guandolo.

In this way, on December 31, 2022, the streets of Florida will again be filled with the happiness of children, elders and youth. The Parade of Joy will be a new example of the joy, tradition and wisdom of “Valley Spring”.

*The interviewees clarified that there were no names to mention, but the wishes are many and that the most important thing is to recognize that the parade is the meeting of all Floridians and the traditions and customs of the barrio La Esperanza and specific families of this municipality Huh. ,