Paranda’s Christmas Tradition Turns Up in the Florida Diaspora 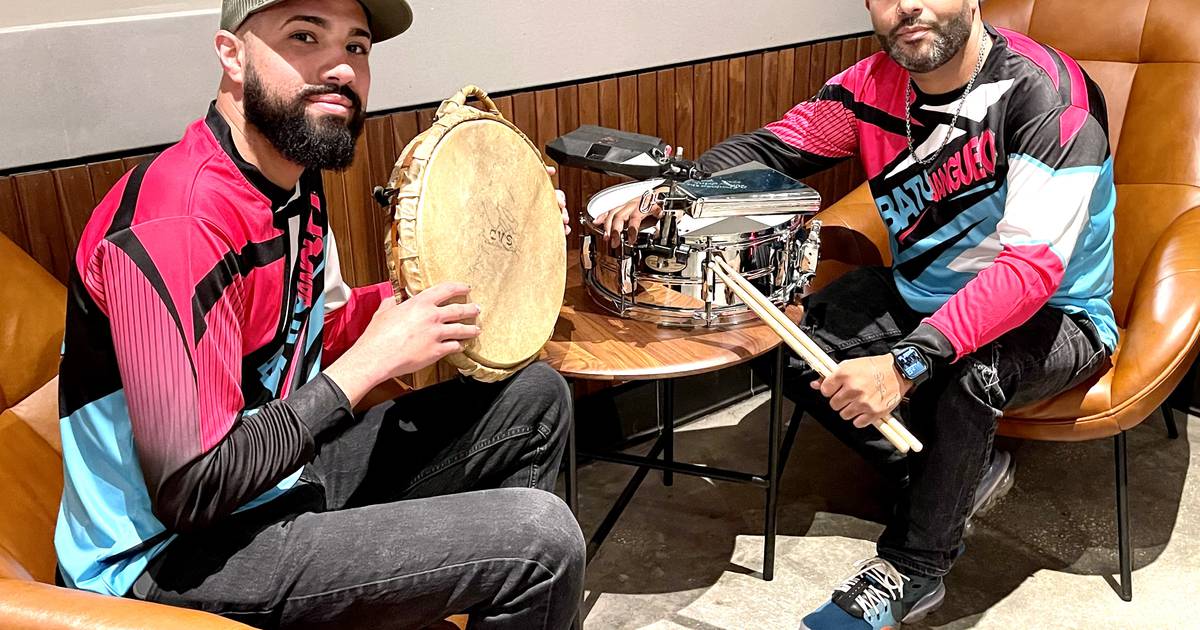 Abito Pérez and Julio César Rivera, composers and owners of the Batuzangueo group, cannot forget the party in Kissimmee when, at the climax of the booze, an American neighbor knocked on the door of the residence where they were partying and asked if Said party, stop the program because she had just put her baby to bed.

Pérez recalled the moment with resignation, “No way, we ended the party there out of thought, because we have kids and because we’d already played the last song.”

But he hasn’t been alone.

On another occasion, and since partying is prohibited in the United States, they were playing at a planned event. “But the concert was extended and boom! They cut everything,” Rivera said. They turned off the sound equipment because it was ten o’clock at night and too late to play instruments and sing loudly, he explained.

The moment in which musicians and fans walk into a warehouse after concert organizers decide to end the show. (Orlando Sentinel handout)

“At least, the makers were kind enough to take us to a closed warehouse and there we could play and party. It was great,” said Perez, who has lived in Florida for seven years and is from Naguabo, a city on Puerto Rico’s east coast.

“But in other places we played till the police ordered us to stop. One time a policeman came, but the agent was Hispanic and he understood us. Luckily when he came to ask us to stop playing, we had already finished the set,” Rivera said.

Their testimonies are examples of how the Christmas tradition of partying has undergone major adaptations to survive in the diaspora and to accommodate the rules and regulations of coexistence in the United States.

It is pleasant, desirable and expected in Puerto Rico to hear a loud musical blast at dawn that wakes half the neighborhood to the sound of guitars, cowbells accompanied by a more or less tuned choir. But in the United States it is a crime.

“Here in Florida we manage to party. Boricuas are stubborn. They tell us no and we make it up to us because partying means togetherness and joy, even though we can no longer sing outside the house and We have to take it inside and sing and play at low volumes,” said Perez, whose music is characterized by the group’s emphasis on Caribbean percussion instruments.

Some of these adjustments include partying early in the evening, partying ahead of time with your host, and partying indoors in moderation. In other cases, partying in homes has been replaced by meetings in lounges or restaurants where a musical group arrives and, in extreme cases, partying during daylight hours, the batuzanguo musicians explained.

Rivera is a native of Fajardo—a city in the northeast of Puerto Rico—and said that when he moved to Florida eight years ago and began living along these borders, he felt overwhelming frustration.

“It’s very difficult because a Puerto Rican is not able to enjoy Christmas the way we like to celebrate it. And it was so difficult that I wanted to return to Puerto Rico because as soon as we started playing anywhere, home owners would immediately get scared and tell us to turn down the volume and go indoors. There are no surprises anymore and you have to call to coordinate the party. In Puerto Rico, although many developments have controlled access, at the booth There’s a conversation with the guard and they let you through,” Rivera said.

Being in the diaspora, Hispanics—in this case two Puerto Rican musicians—have had to adapt to maintain Christmas traditions. (Orlando Sentinel)

Perez understands that it is important to respect the rules and laws of the place where one comes to live. However, he is confident that it will be a matter of time before all this changes. “Every time we are growing more and more and as we unite, I think this can change. Also, it is important that we continue to educate our children so that it is not lost, even Let us get off the island,” Perez said.

In fact, Perez said that while some North Americans consider these musical expressions a noisy nuisance, others appreciate it as part of the cultural diversity that makes Florida a distinct state.

“Some North Americans, when they hear the music and the beat, come up excited and ask what the music we play is, and they get excited because it’s different. Remember that the American has this beat or acoustic Drums are not. Sometimes they ask and want to learn and then someone takes advantage and educates them about our history and culture. But there are some who feel that we are trying to impose ourselves and create ruckus have come,” Perez said.