Pat Leonard: A Saquon Barkley trade would be best for the Giants’ running back 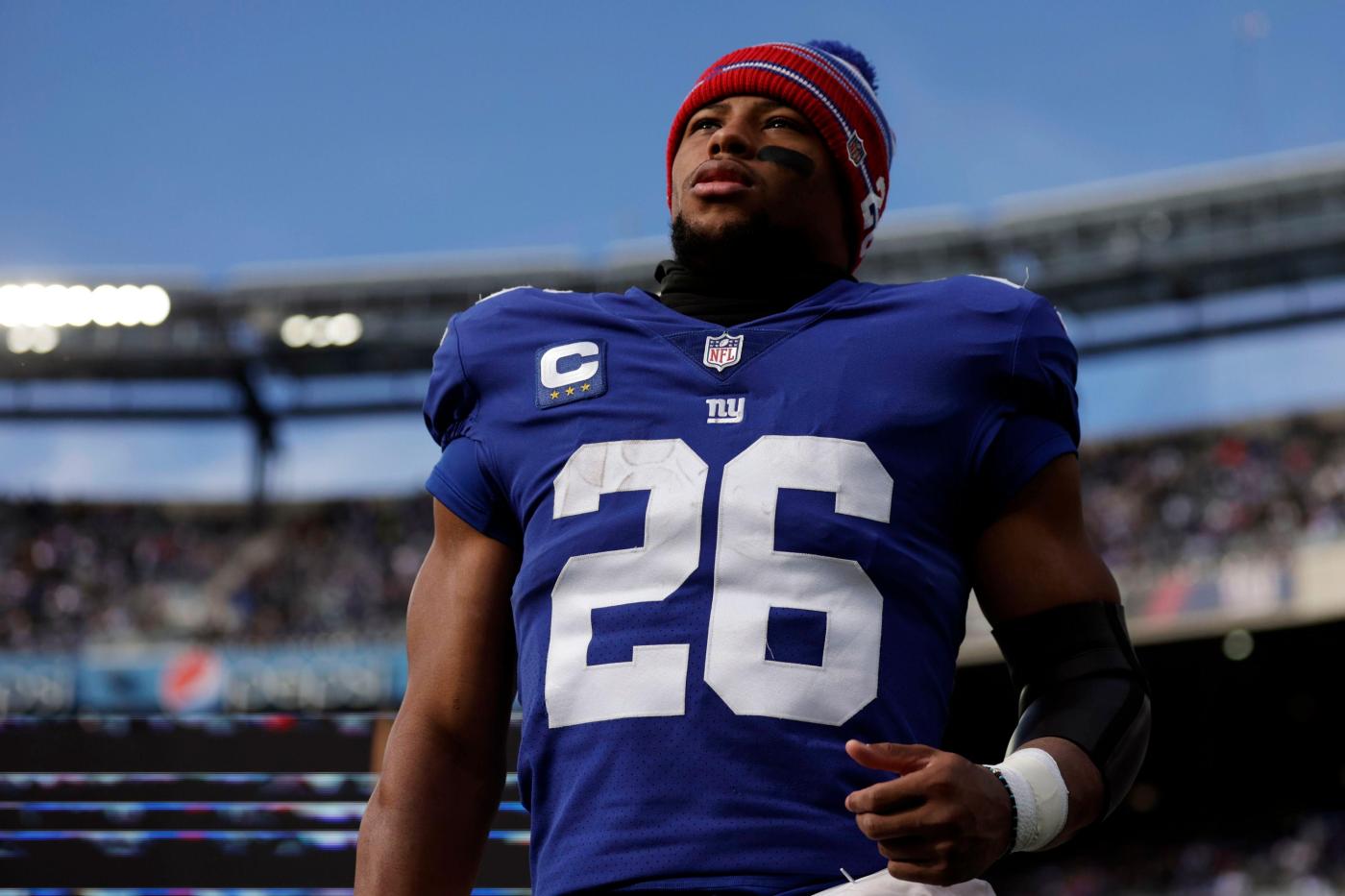 Saquon Barkley would be better off on another team.

The Giants need to cut their losses on inefficient investments and spend differently in order to clean up their salary cap and build a winning, sustainable product.

Some candidates for the Giants’ head coaching vacancy actually viewed a Barkley trade as a necessary early move if they’d been hired.

So it makes sense for the team to trade Barkley, who is owed $7.2 million on his fifth-year option in 2022.

But the other reason a trade could and should happen is that it would be best for Barkley, too.

Barkley, 25, likely would never say this publicly. He is too aware and intelligent about his business and brand. And he has typically been publicly accountable for his and the team’s failures, outside of a month-long absence from the public view last season.

But he undoubtedly would welcome a change if it came.

Think about it: This is the most important year of Barkley’s career from an earnings perspective. He is playing for a lucrative second contract.

He has struggled to stay healthy with the Giants. He has been weighed down by all the losing and the pressure to fix everything with a big play on every touch.

The Giants aren’t poised to field a top NFL offense this fall. And Barkley needs three things in 2022: to stay healthy, to perform and to win.

So imagine if new Giants GM Joe Schoen flipped Barkley to Schoen’s former team, the Buffalo Bills, one of the NFL’s top offenses with no true No. 1 back. Or what if he sent him to the Miami Dolphins, a team with cap space, no top back and a quarterback who would feed Barkley incessant targets?

Would there be room in the LA Chargers’ backfield with the pricey Austin Ekeler? They have plenty of cap space and a stud QB, and they’re in the state where Barkley trains in the offseason just like his friend Odell Beckham Jr.

This is just a brainstorm on potential trade partners. The point is this:

If Barkley doesn’t have to be an every-down player on a good team, and he can thrive as a big play spark, it would improve his chances of staying healthy and making a difference in games that matter.

And that could get him paid more like the back that the Giants drafted him to be.

Of course, before Schoen makes any big decision about his offense, he has to answer whether that move is best for Daniel Jones.

Ownership’s and Schoen’s preference in 2022 is to give Jones a fair shot at proving he’s a franchise quarterback. Barkley is talented, and the Giants aren’t stocked with elite playmakers, so trading him would remove some skill from their offense.

Still, if Schoen has a modern understanding of positional value — and if he’s truly here to undo Dave Gettleman’s damage — what better way to reset the Giants’ course than to move on from Gettleman’s defining miscalculation: the selection of Barkley No. 2 overall in the 2018 NFL Draft.

John Mara and Steve Tisch routinely have made the mistake of trying to win now — and overestimating their team’s ability — rather than patiently building a sustainable product.

Not trading Barkley seemingly would risk one of two unappealing scenarios after the 2022 season: either the Giants would have to pay him big money on an oversized second NFL contract, or they could lose him in free agency for only a compensatory draft pick.

So even if Barkley had a bounce-back year, would it be worth it for the Giants in the long run?

The harsh truth is that Barkley’s liability in pass protection and poor fundamentals don’t help his cause for being irreplaceable. Devontae Booker’s superb play at a $2.5 million cap hit last season while Barkley was injured at $10 million also reinforced that the Giants could spend their money more wisely elsewhere.

To be fair to Barkley, he worked hard to recover from his torn ACL going into last season. He had a breakout game and helped carry the Giants to a Week 4 road win at New Orleans. And his next injury wasn’t his fault.

Jones overthrew Barkley on a slant route at Dallas. The running back probably would have taken an accurate pass to the house. Instead, Barkley turned to watch the ball sail over his head and badly sprained his ankle by stepping on the foot of Cowboys corner Jourdan Lewis.

It was a freak accident and, arguably, the turning point of the Giants’ season.

Also, from Barkley’s perspective, no one knows whether he would want to get paid in New York, either, if he had his way.

Remember: Barkley watched the Giants trade Beckham to Cleveland in March 2019 only months after giving OBJ a lucrative contract extension.

That was Barkley’s first eye-opening exposure to the real nature of this business. Maybe Schoen and Brian Daboll will reassure players of new stability in this building.

Barkley is a unique, special talent. It just was never realistic that he would be able to deliver the value of the Giants expected and required with his high draft pick.

So the best thing for Barkley’s value now is to play elsewhere. The Giants, therefore, could do right by themselves and by Barkley with one phone call this spring.