People are liking this car more, not Toyota’s Fortuner, Innova or Glanza; buy with your eyes closed

July 2022 has been a great year for Toyota Kirloskar Motors. Last month, the company got an annual growth of 50%. In July 2021, the company sold 13,098 units in the Indian market. At the same time, it sold 19,693 units in July 2022. That is, the company sold more than 6595 units. Similarly, it got 19.26% growth in monthly sales. The special thing is that Toyota, which sells the most powerful SUV in India, achieved this position because of the compact SUV. The Urban Cruiser proved to be the trump card for the company. This compact SUV has been built on the platform of Maruti’s Vitara Brezza. Urban Cruiser posted yearly growth of 174.67%. 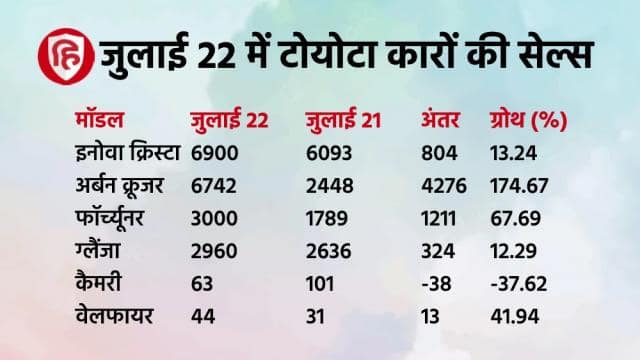 Highrider has now become an urban cruiser
Toyota launched the Urban Cruiser Hyryder mid-side SUV last month. The Highrider is built on the Suzuki architecture. It has been brought with Self Charging Hybrid Technology. The production of this new urban cruiser SUV will start from August at Toyota’s factory in Bidadi near Bangalore, Karnataka. The company has also started its booking. Customers can book it by paying Rs 25,000.

Also read- Mahindra unveils the price of New Scorpio Classic, will have to spend so much money to buy it

1.5-litre mild-hybrid petrol engine
Toyota’s Urban Cruiser Highrider will get the segment’s first mild-hybrid petrol engine. It is also the segment’s first model to get all-wheel-drive in the mild-hybrid variant. The High Rider is powered by a 1.5-litre engine that comes mated to an e-drive transmission. Its engine output is 68 kW and it is capable of generating 122Nm of peak torque. Its motor output can generate power of 59 kW and torque of 141Nm. Both the motors together are capable of generating an output of 85 kW.

Exterior of Toyota Highrider
Talking about the exterior of this compact SUV of Toyota, it has been given a dual-tone color. That is, you will be able to buy it with Red + Black or Blue + Black combination. It may be that many color options will be available in it at the time of launch. It gets a bigger bonnet, chrome strip, split LED DRLs and a bigger air dam. Wraparound tail lamps are available at the rear. The SUV has been given a brand new designed dual-tone alloy wheels. It is longer than the normal urban cruiser.

Also Read – This Hyundai Car Has Spoiled Sales Of Several Its Own Models; In front of it Creta, Venue, Verna, Aura all fail

Interior of Toyota Highrider
Talking about the interior of the vehicle, it will get a dual-tone finish. Soft-touch leather is seen on the dashboard. In this mid-size SUV, you will get to see features like free-standing touchscreen infotainment, HUD and panoramic sunroof. Apart from this, features such as rear AC vents, climate control, wireless Apple CarPlay and Android Auto with touchscreen infotainment system, power driver seat, digital instrument cluster, leather upholstery, connected car technology and 360-degree camera have also been included in the Urban Cruiser. .