Pike at peace in prime position

Playing in the second group off the 1st tee at Cypress Lakes in the truncated event that was shortened to 54 holes and only got underway on Friday due to heavy rain the proceeding weeks and days, Pike got hot early. The two-time PGA Tour of Australasia winner turning in 29 after four straight birdies. The early rising spectators on 59 watch.

“That front nine I kept giving myself eight and nine footers and I rolled everything in. It was pretty simple,” Pike said after his round.

“I remember before I was even playing the first round, I thought to myself and was speaking to my girlfriend on the phone, it was one of those weeks where you just have to keep your head on.

“There’s nothing you can do, it’s wet out here, there are going to be some situations that are not going to go your way and all that kind of stuff. It’s just one of those weeks and golf is becoming more and more like that for me. Maybe I’m just finally realizing it.” 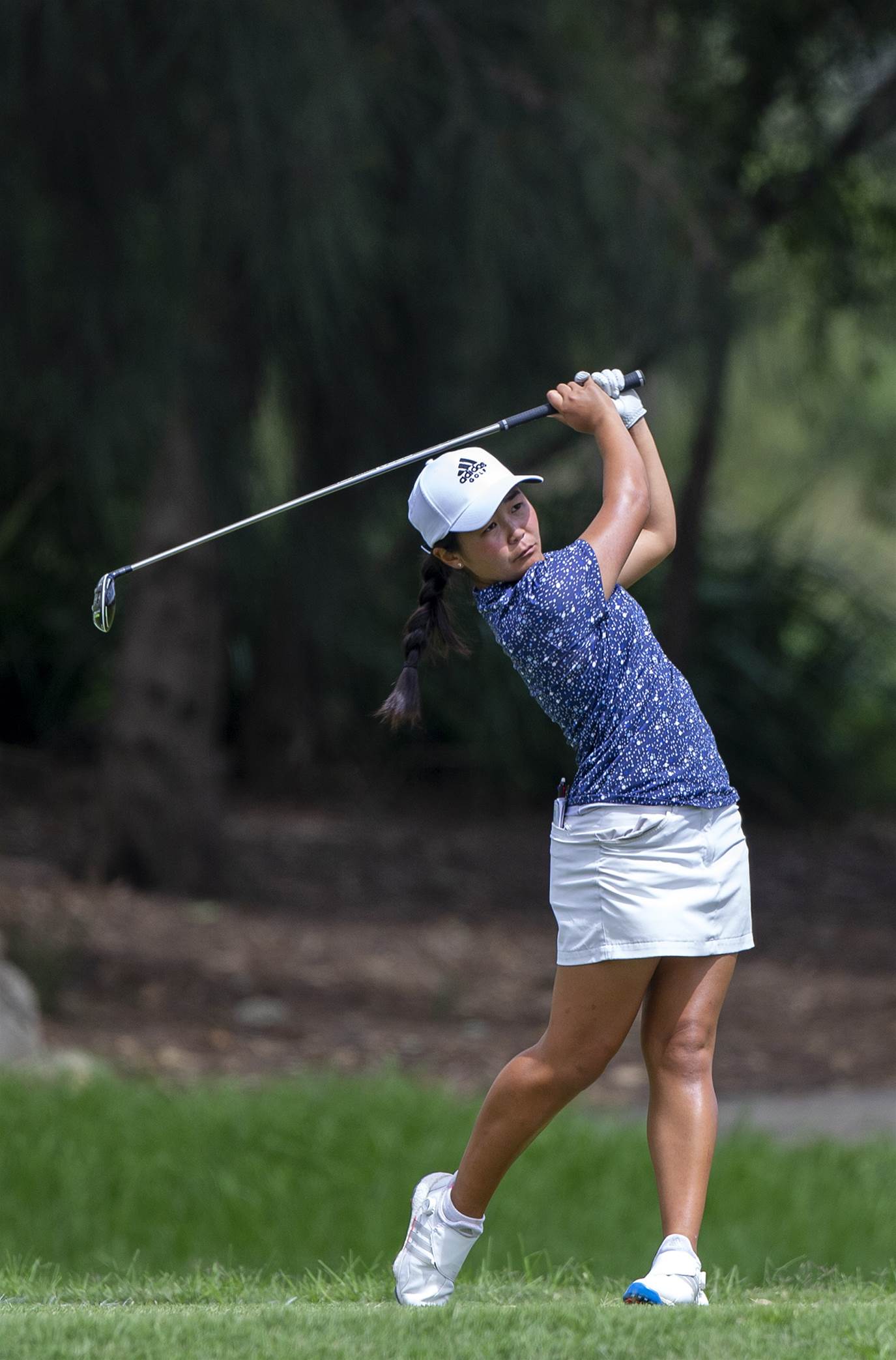 Despite the dampness in many areas of the Steve Smyers designed layout requiring ground under repair marking and preferred lies through the green, Pike and his fellow players noted the quality of the putting surfaces, which were noticeably quicker during the second round.

RIGHT: Momoka Kobori shot an even-par second round to keep touch with leader Aaron Pike with one round to play. PHOTO: PGA Tour of Australasia.

The pure rolling surfaces and one of the strengths of his game proving a perfect combination, even if his birdie blitz dried up after he rolled in a short putt at the 12th which had been converted from a par-4 to a par-3 for the opening two rounds.

“It was like I was putting on the greatest greens I’ve ever seen. They were just immaculate to start off the day.

“That front nine I kept giving myself eight and nine footers and I rolled everything in. Not to sound arrogant but I’ve always been a good putter so it’s something that’s come to me naturally.

“I just knocked them straight in the middle. I was seven-under at that stage and you know you’ve got a few birdie holes coming up after that and even those ones. I didn’t get the chance to make the birdies the last few but I had some really good looks.”

Finishing with six straight pars, Pike broke the shaft of his 3-wood when hitting his tee shot on the 14th and as a result was unable to attack the par-5 16th in two but was happy to be in the clubhouse early and head off to sample some of the local wines with roommate for the week and close friend Michael Sim.

“I remember before I was even playing the first round, I thought to myself and was speaking to my girlfriend on the phone, it was one of those weeks where you just have to keep your head on.” – Aaron Pike.

The story for the remainder of the day proved not to be whether Pike could be reeled in but by how much he would lead with 18 holes to play.

Kobori, who hails from the Canterbury region of New Zealand’s South Island, followed Pike’s example on the front nine, two birdies lifting the soon to be 23-year-old one shot back before running into trouble on the back nine.

Bogey at the 11th was followed by another at 15 before the Kiwi found the fairway trap on the par-5 16thher second shot also finding sandy resting place, a three putt resulted in another dropped shot.

Par at the penultimate hole stopped the rot, Kobori then nearly holing her approach shot at the par-4 last, the resulting birdie drawing her level with Armstrong, who will play in the final group alongside Pike and one of the junior competitors that get their event underway on Sunday.

“It was definitely a bit of an up and down day today,” Kobori said on Saturday evening before taking to the practice green for a putting competition with her caddie Darryn Lowe. “The front nine I struck the ball pretty well – I think I hit all the greens in regulation which was pretty cruisy – and then the back nine was a little bit hectic but managed to finish with a birdie so I’m happy with that. “

With conditions improving by the hour and the fairways set to be mown on Saturday evening after the rough received the same treatment on Friday after play, scoring could improve again. However, if Pike continues in the same vein as Saturday as he learns more about the layout, the chasing pack, which includes Sim, Jay Mackenzie and Cassie Porter at four-under, have their work cut out for them.

“You just have to pick your spots where to attack around here, especially with the elevated greens and undulations,” the 36-year-old said. “It’s a bit of a thinker’s golf course rather than just get out there and bomb it.”