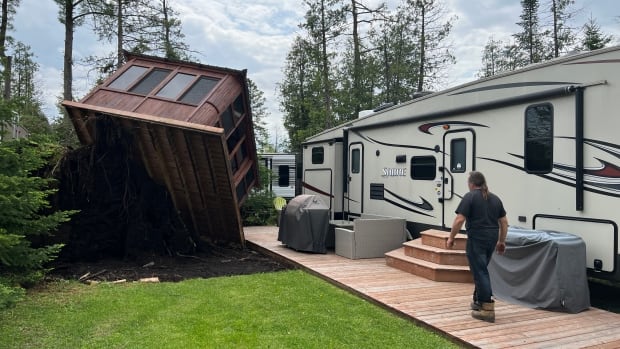 Ottawa city officials are urging residents to stay patient as crews work to restore power to tens of thousands of homes following the violent storms that swept through Saturday afternoon.

Some of Ottawa’s worst hit areas include Hunt Club, Merivale, Navan and Stittsville.

With power likely out in some places for days, the city has opened nine emergency centres.

They cover a wide swath of the city, offering amenities like washrooms, charging stations and showers.

Heads up: More emergency reception centers are now open for #OttCity residents in need.
For more information, visit: https://t.co/W8ATVUSDNr
Check back on this page for updates as they become available and follow us on our social media channels!

More than 350,000 customers in the region were initially left without power Saturday, and as of Sunday afternoon, that was still above 300,000. Hydro Ottawa reported more than 177,500 customers were still without power.

“The challenge … is we receive our power from Hydro One, and if it’s not coming through the system because of downed lines, it will obviously have an impact on our customers,” Mayor Jim Watson said.

“So we’re trying to get as many of our customers back as possible.”

While residents are understandably “frustrated” with the outages, Watson urged residents to remain patient, noting during a Sunday afternoon press conference that he was dismayed with some of the comments he was reading on social media.

,[The crews] are working their hearts out to make sure that we get the power back as quickly as possible. But with over 170,000 customers without power, it can’t all be done within an hour or so,” he said.

The storm has also knocked hundreds of traffic signals out of commission, according to the city, and Watson pleaded with drivers to treat them as four-way stops.

“We ask you to remain positive, despite the challenges. We ask you to please be patient. Please respect the rules and directions given to you by first responders,” Watson said.

No state of emergency would need to be declared, he added, as that would only really give the city power to bypass the typical procurement process for equipment or supplies — something that wasn’t necessary at the moment.

With so many traffic lights out, and with toppled trees cluttering the roadways, Ottawa police have asked residents to avoid driving around the city.

Power was also out at the Robert O. Pickard Environmental Center, which treats hundreds of millions of liters of wastewater each day. It has backup generators but according to a city manager, water quality leaving the plant was still affected.

Officials said around 5 pm that its power had been restored.

In a statement, Hydro Ottawa said the overall situation was “complex” and that crews had worked overnight — and would continue to do so — to get everyone’s power back on.

“At this time, we believe this will be a multi-day restoration effort. Power will be restored initially to large scale outages, followed by smaller ones,” the power utility said.

Help is coming from other provinces, according to Joseph Muglia, Hydro Ottawa’s director of system operations and grid automation.

Crews have worked overnight and will continue to do so over the coming days.

Restoration is expected to extend over multiple days & will be prioritized by trying to do the greatest good for the greatest # of customers: large scale outages restored first, followed by smaller ones pic.twitter.com/rjliphFwNv

The Ottawa international airport is running on backup power, although Hydro Ottawa expects it will be fully connected to the grid by Sunday evening.

Travelers who have to get there should build in extra time, as some roads are blocked by downed trees.

As of 5:30 pm Sunday, more than 75,000 Hydro-Québec customers were still in the dark in the Outaouais, as were roughly 80,000 Hydro One customers across eastern Ontario.

Several people were killed in the storm or its aftermath, including a 59-year-old man who died after a tree fell on him at the Canadian Golf and Country Club near Stittsville.

A 51-year-old woman died Saturday when her boat capsized on the Ottawa River in the Masson-Angers sector of Gatineau, Que., while a 44-year-old man was struck and killed by a falling tree at a cottage near Calabogie , Ont.

Local school boards were also assessing the damage, with the Ottawa-Carleton District School Board telling families Sunday evening that Castor Valley Elementary School in Greely would be closed to in-person learning due to damage to its roof.

The Ottawa Catholic School Board said learning would be virtual Tuesday at St. Monica School on Merivale Road.

Saturday’s storm was just the latest in a string of natural disasters to hit the Ottawa area in recent years, including the floods of 2017 and 2019 and — perhaps most saliently — the devastating tornado strikes of 2018.

The silver lining from those earlier weather events is that they’ve taught important lessons about what needs to be done when natural disasters hit, said Ottawa city manager Steve Kanellakos.

“And what we’ve done this time is we’ve moved very quickly to take care of the health needs — the human needs — of the community.”

Gophers Football vs. Indiana: Keys to the Game, How to Watch and Who Has the Edge