As a celestial body, hanging onto your atmosphere isn’t always easy — just ask Mars — and a new study shows that the gases around Pluto are now disappearing, turning back to ice as the dwarf The planet moves further away from the Sun.

Pluto’s atmosphere, already on the thin side, is largely composed of nitrogen with a few dabs of methane and carbon monoxide. As surface temperatures drop, nitrogen appears to be re-freezing, causing the atmosphere to fade.

The evaluation was done using something known as occultation: using a distant star as a backlight for telescopes on Earth to get a look at what’s happening on Pluto. It is a tried and tested observational technique that is widely used in astronomy.

Pluto and its atmosphere as seen by New Horizons. (NASA/ZHU-APL/SWRI)

“The New Horizons mission obtained an excellent density profile from its 2015 flyby, consistent with a doubling every decade of Pluto’s bulk atmosphere, but our 2018 observations do not show that trend continuing through 2015.”

Pluto’s atmosphere is composed of vaporized ice on the surface, with small changes in temperature causing significant changes in the bulk density of the atmosphere. The largest known nitrogen glacier is Sputnik Planitia, the western part of the heart-shaped Tombaugh Regio region visible on Pluto’s surface.

The dwarf planet currently takes 248 Earth years to make an orbit around the Sun, at one point becoming as close as 30 astronomical units (AU) from the Sun – which is 30 times the distance between Earth and the Sun.

However this distance is increasing, leaving Pluto with less sunlight and lower temperatures. The increase in atmosphere density seen in 2015 is most likely due to thermal inertia – residual heat trapped in nitrogen glaciers, which delays the response to the increasing distance between Pluto and the Sun. 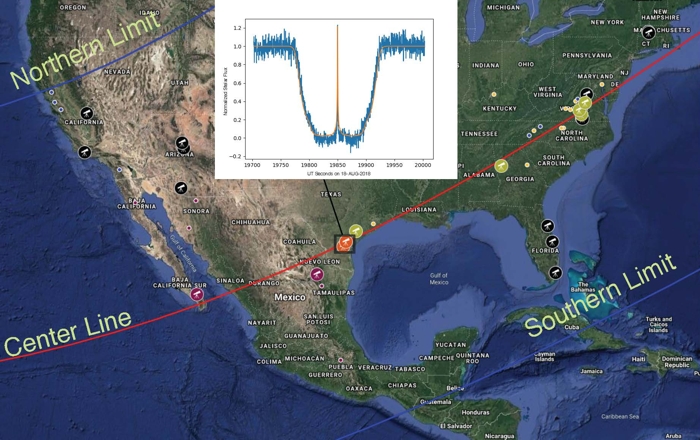 Above: Telescope near the middle of the shadow’s path observed a ‘central flash’ caused by Pluto’s atmosphere refracting light in a region at the center of the shadow.

Pluto may no longer be counted as a planet—still a source of some controversy among experts—but it is a planetary body of interest to astronomers. We keep learning new information about this distant rock all the time.

In recent years, astronomers have been able to discover that Pluto has snow-capped mountains, and liquid oceans beneath its surface – two discoveries that could tell us more about how the dwarf planet’s atmosphere operates. (and both are coming as a result of 2015’s new Horizon flyby).

The 2018 observations benefited from a ‘central flash’, indicating that the telescopes used were directly observing Pluto while atmospheric measurements were calculated, further increasing their reliability.

The findings are shared at the annual meeting of the American Astronomical Society’s Division for Planetary Sciences.

Republicans have used Senate delays to make changes to the US product safety regulator, which has raised concerns among critics.

Kristen Stewart talks about the “creepy” scene she filmed in “Spencer”

Can humans really survive in the harsh deserts of Arrakis Dune? We discovered

Two injured in shooting in Oakland; one is in critical condition

Jeff Bezos blasts off into space with his own rocket: ‘Best day ever’