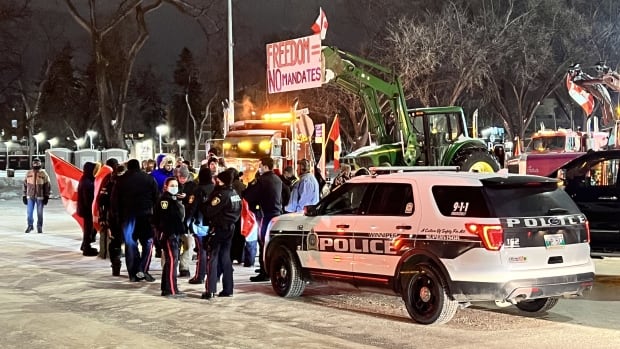 Winnipeg police have identified a man accused of hitting four people with his SUV on Friday night during a protest against pandemic restrictions outside of the Manitoba legislature.

David Alexander Zegarac, 42, of Headingley, Man., has been charged with a number of offenses, including four counts of assault with a weapon, failing to stop at the scene of an accident and dangerous operation of a vehicle causing bodily harm.

The charges stem from an incident that occurred just before 10 pm on Friday, which police spokesperson Const. Rob Carver outlined in a rare weekend news conference on Saturday.

Carver said a man driving a white Jeep traveling westbound plowed through a group of protesters on the legislative grounds, hitting four men.

Three of the men sustained minor injuries that didn’t require medical attention, but one was taken to hospital, treated and released, he said.

The driver of the SUV drove away from the legislature at high speed, running red lights, and about 40 minutes later was arrested in Headingley following a brief struggle, police said.

On Saturday, Carver said he couldn’t speak to the driver’s motivations for allegedly striking the protesters, but said the driver had blurted out statements that made police think it wasn’t about pandemic-related mandates.

He has no prior charges in Manitoba.

The hit-and-run was caught on camera and shows a white SUV hitting one person before driving out of the frame. The person stands up after being hit.

Caution: This video may be distressing to some viewers. Video posted to Twitter by @aaroniscloser. 0:46