Political Vision in Sudan: The NUP-DUP Agreement and the FFC-CC Vision Published 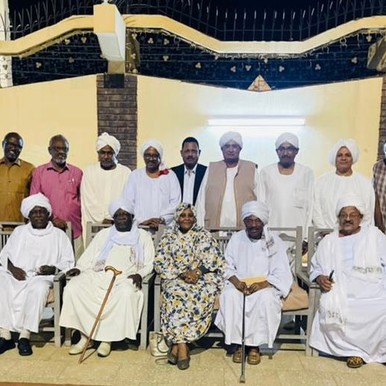 A week of political vision for Sudan: The National Ummah Party (NUP) and the Democratic Unionist Party (DUP) agreed on an intra-Sudanese dialogue during a meeting in Khartoum on Sunday while the Force of Freedom and Change-Central Council (FFC-CC) faction on Thursday published its vision for ending the coup and establishing a new civil democratic path.

The National Ummah Party (NUP) and the Democratic Unionist Party (DUP) agreed to an intra-Sudanese dialogue through a ‘national mechanism’. The Parties welcome cooperation with the international and regional community as facilitators in the political process to reach a solution to the Sudanese crisis.

After a meeting in Khartoum on Sunday of two high-level delegations, one headed by NUP acting chairman Major General Fadallah Burma Nasser, and the other headed by DUP deputy chief Al Bukhari Abdullah Al Jaali, the parties appealed to all in Sudan. The political forces “to gather ranks and agree on important issues of the motherland to achieve unity and a comprehensive peace and to accomplish democratic transformation”.

The two oldest political parties in Sudan that used to be bitter rivals since their inception in 1945 and 1952 respectively, also established a joint committee to coordinate positions on current national issues.

The Force of Freedom and Change—the Central Council faction—has begun its approach to end the coup and establish a new civil democratic path.

Read Also:  IDP Bills Rattle Disabled Voters: 'We No Longer Have a Vote'

In its outlook released on 2 June, the FFC-CC stated that the way out of the current political crisis is “an end to the current coup regime and the coup d’état and a new constitutional establishment in which Sudan’s authority is fully civil and military institution.” Far away from politics.”

The FFC-CC declared its support for the role of the AU-IGAD-UN Tripartite Mechanism in facilitating the political process among Sudanese.

The bloc called for the need to include Sudan’s regional and international friends, such as Sudan’s neighbors, the Sudan Troika (Norway, USA, UK) and the European Union, as supporters of their envisioned political process and as guarantors of the solutions it finds. Stressed on.

According to the FFC-CC, the political process will go through phases, beginning with the end of last year’s October 25 coup, followed by a new constitutional order, and a transitional phase in the new establishment of a civil democratic path. The period that must end with a constitutional convention.

The FFC-CC lists the parties targeted by the UN-AU-IGAD tripartite mechanism as the parties they wish to enter into this political process: the Putschist camp on the one hand, and the anti-coup forces which include the FFC faction, the Resistance. Committees operating in the country’s neighborhood, and rebel forces (both signatories and non-signatories to the 2020 Juba Peace Agreement).

Read Also:  The G7 must find strength and unity to overcome great challenges - otherwise its enemies will become stronger

Most opposition parties and groups say they are ready to talk about a solution to the crisis in the country, but only after the military is ousted from power.

The Sudanese Congress Party said on Tuesday last week that it would deal positively with the AU-IGAD-UN tripartite mechanism, provided that “the goal of the political process is to end the coup and agree on constitutional measures whereby a full civil authority can be established.” Will be done”.

According to the Communist Party of Sudan, “the only way is for the military to hand over power to the Sudanese people”.

The Sudanese Professionals Association (SPA), the driving force behind the December Revolution that ousted dictator Omar al-Bashir, told Radio Dabanga last week that the SPA categorically “rejects any dialogue with perpetrators of crimes”. which would lead to their impunity”, and demanded, “like most people in Sudan”, a pure civilian government, the transfer of companies owned by the military sector to the Ministry of Finance, and justice for the victims of the junta.

In her memoir, Katie Couric writes about Lauer’s feelings of betrayal.