Politics and Hoax: A Night of Front Row Applause and a Little Dancing 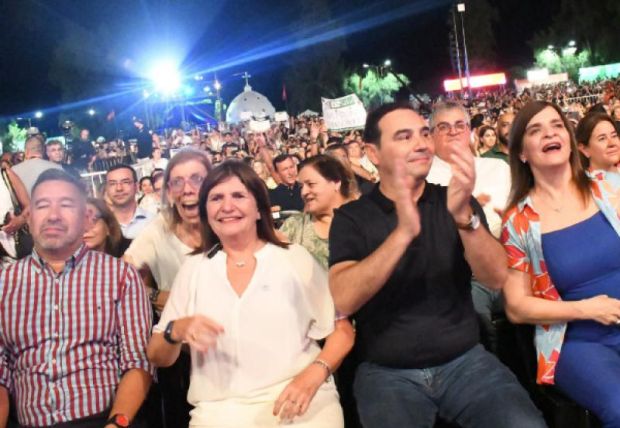 Karina La Princesita and Mario Bofil were the hottest musical numbers on Thursday night at the 32nd Chamame National Festival in Cocomarola. But for many people the first row of chairs on the right side of the stage was also attractive. Governor Gustavo Valdés, Provincial First Lady Cristina Garo, Mayor of the capital Eduardo Tassano and his wife were seated there; But also three special guests, figures from the national political sphere: the president of the PRO and Macri’s former security minister, Patricia Bulrich, and the radical senators Carolina Losada and Luis Nadenoff.

National party leaders accompanying Bulrich’s entourage (such as former dancer and choreographer Maximiliano Guerra) also gathered in that area of ​​the amphitheater, as well as legislators and provincial officials, and mayors of several communes in the interior. For example, the community chiefs of Ituzingo, Saladas, Ca Cati, Itati, Riachuelo and Paso de la Patria, among others, were present at the site.

As the central numbers scheduled for that celebratory night passed, excitement grew between the seats, which was reflected in repeated, almost endless applause and ear-to-ear smiles. The Chamamesero ecstasy made us at times forget the heat which – at that time of day – still remained oppressive.

On the seventh day of the Chamme Festival, Valdés arrived with Bulrich, with whom he made statements on the Radio Dos and Epoch stands. There Bulrich recalled that since his childhood at school he had danced “all kinds of dances and of course the Chamame”.

In place, Valdés highlighted the presence of popular chamesero Nino Ramirez, who was at the stand presenting a note before the president arrived with Bulrich.

Likewise, the governor stressed that it was “a luxury we can afford to have in this celebration in Corrientes a series of figures of national relevance who are the intangible heritage of humanity”, and also highlighted the presence of the President of the PRO. Poured.

“This party is taking more and more flight and drive,” indicated Valdés and in this context he stressed: “The culture must be worked on and supported, but we must do it throughout the year, not only in the party.” And each city must be accompanied by its festivals, its artists, its festivals and its patron saints”.

For her part, Patricia Bulrich told local television that this is the first time she has attended the party and highlighted Valdés as a “great host”. Furthermore, he stated that “I rediscovered Chamme”.

At the end of the interview with the media, Valdés went to his place in front of the stage of the Cocomarola Amphitheater to enjoy an evening with his entourage and national guests – Chama.

On this occasion, National Senator Luis Nadenoff indicated that “it is not the first time that I have come and I want the whole world to reach Corrientes”, and also said that he attended the party “because I felt it”. And it is part of our tradition, originally from the region and our culture.”

In this context, he expressed that in Formosa – where he is from – Chamame “lives with great passion”, recalling that Lazaro Caballero from Formosa, “who embraces the world of Chamamesero” from the main stage of Corrientes. Gone

Meanwhile, Carolina Losada highlighted that in Santa Fe “the Chamma live with great enthusiasm, especially in the north of the province,” and she revealed that this is the first time she has participated in it.

“I think it’s good that we have something to celebrate at a time when we Argentina have been hit a bit,” said Losada, noting that he would like to experience this kind of party in October. “Because we Argentinians deserve to live seriously.” Country, predictable, where it’s cool to go out, work to make ends meet, and I’m pretty sure that’s a reality”.

Both the visitors and the hosts enjoyed an emotional night from Cham, with a plus that always gives a sense of Corrientes to its music. And that’s what was shared at Cocomarola. Everyone was amazed by the experience of this chame, although the joy was not complete, at least for what was expected. Dancing was missing, for which visitors were not encouraged. “I don’t want to be a meme,” Losada said with a smile.

While Bulrich – though he didn’t say it – certainly had an excuse for the intense day of activities he had done since morning. But, will there be any more chances to dance and gorge? Maybe it will be with candidacy.

Visitors and many of the political language hosts were attracted by the unique aroma of barbecues set up behind local radio booths and to the side of the stage.

There were few who dined at this barbeque, nor were there those who tasted even a little of the stew, which is one of the excellent gastronomic offers of this place.