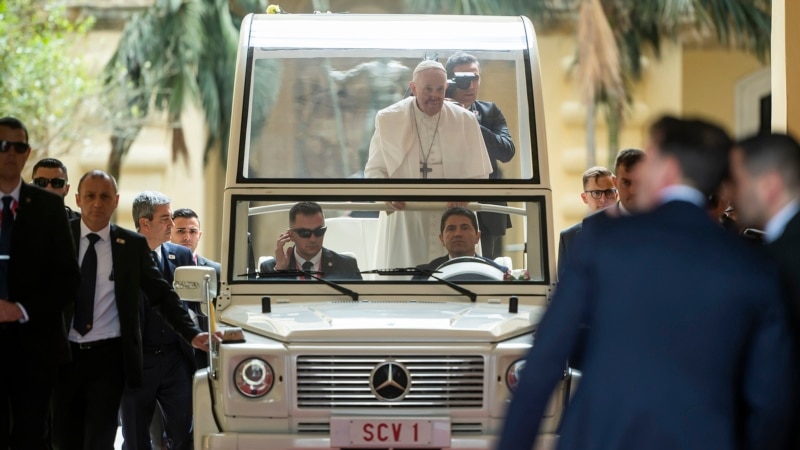 Pope Francis left on a two-day visit to the Mediterranean island nation of Malta on Saturday, a visit that was postponed in March 2020 due to the coronavirus pandemic. The pope is expected to use this visit to address the issue of European migration, which has become a growing concern with the war in Ukraine.

The plight of migrants in Europe as the world watches an endless stream of Ukrainians seek refuge after Russia’s invasion is of paramount importance to Pope Francis as he makes a weekend visit to Malta, an island that has always been on the front lines. in dealing with the large numbers of sea arrivals from Africa. Maltese authorities have often found the situation complicated and NGOs have accused the island nation of not doing enough to help people in need.

Before leaving Rome on Saturday, the 85-year-old pope met three Ukrainian refugee families housed by the Catholic community of Sant’Egidio. In recent weeks, he has often spoken of the need to assist fleeing Ukrainians who have been forced to leave everything behind as a result of the war.

Francis is the third pope since 1990 to visit the three-island archipelago, where 85% of the roughly half a million people profess the Catholic faith.

At the end of a general hearing in the Vatican on Friday, the pope said he was looking forward to visiting that “similar land”, in the footsteps of the apostle Paul, who was allegedly warmly welcomed there after suffering a shipwreck. has. pad na Rome.

The pope added that this trip would give him the opportunity to experience for himself the Christian community there, whose living history dates back thousands of years, and to meet the people of a country located in the middle of the Mediterranean and south of the European continent. Francis paid tribute to the Maltese people for their welcome and dedication to “so many brothers and sisters seeking refuge.”

On Saturday, the pope will meet with the Maltese authorities and after lunch embark on a catamaran ride from Valletta Harbor to the island of Gozo where he will preside over a prayer meeting at the Ta ‘Pinu National Shrine.

On Sunday he visits the Cave of St. Paul, the island nation’s patron saint, whose ship, according to legend, washed up on the Maltese coast in 60 AD. He will then celebrate a mass in front of thousands of people in a square in Floriana. Before returning to Rome, Francis will meet with migrants at the Peace Center in Hal Far, established in honor of Pope John Paul XXIII. The center is run by volunteers who help Franciscan brother Dionysius Mintoff, who founded it 50 years ago and today runs it at the age of 91.