Pope Francis in front of indigenous peoples in Canada: “I renew my request for pardon” 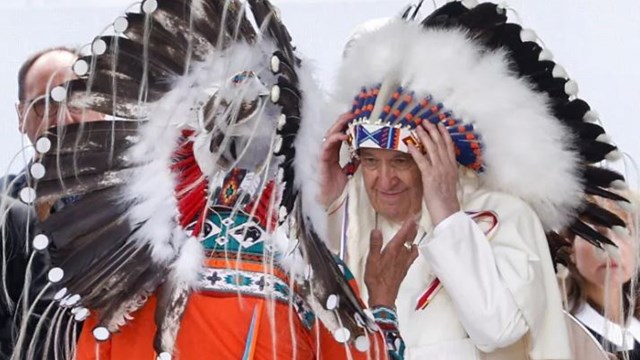 Pope Francisco held this monday On the second day of his visit to Canada, a meeting with the indigenous peoples of the First Nations, Métis and Inuit, where The “atonement pilgrimage” began to apologize for what happened to the local children in residential schools.

“I have come to your native land to tell you personally that I am injuredTo express my closeness to you, to pray with you and for you, to solicit God’s forgiveness, healing and reconciliation,” said the Supreme Pontiff.

The Pope explained that “in this first phase” he sought to “make room for memory” and explained that his presence was “to remember the past, to cry with you, to look at the earth in silence, beside to pray”. graves”.

“Let the silence help us all internalize the pain. Silence and prayer. In the face of evil we pray to the Lord of good, in the face of death we pray to the Lord of life. A tomb by our Lord Jesus Christ created – the final stop of hope before which all dreams had vanished and only weeping, pain and sacrifice remained – a place of rebirth, of resurrection, where the story of new life and universal reconciliation began,” he said.

He also noted: “Our efforts to heal and reconcile are not enoughHis grace is necessary, the sociable and strong intellect of the soul is necessary, the tenderness of the comforter. May he fill the hopes of hearts. Let him take us by the hand. Let him walk us together.”

“I remember the meetings in Rome four months ago. At that time they gave me two pairs of moccasins as a pledge, a sign of the suffering endured by indigenous children, especially those who unfortunately never went home from residential schools. did not return. They asked me to return the tramps when I arrived in Canada; I would do so at the end of these words, and I would like to be inspired precisely by the symbol that, over the past months, the pain, resentment inside me and the Shame”, continued the head of the Church Catholic.

Read Also:  Anniversary of "The Maharaja of the Piano"

He also continued: “The memory of those children causes sadness and urges us to act so that all children are treated with love, respect and dignity. But those moccasins also show us a path forward.” Tell us, a journey we want to take together. Walk together, pray together, work together, so that the sufferings of the past leave their place. The future of justice, healing and reconciliation,

The Pope indicated that “it is necessary to remember how policies of assimilation and segregation, including the system of residential schools, were disastrous for the people of these lands.”

“When European settlers first came here, there was a great opportunity to develop a fruitful encounter between cultures, traditions, and spirituality. But for the most part that didn’t happen. And what you told me comes back to me that How assimilation policies ended up systematically marginalizing indigenous people,” he said.

He continued: “How, even through the residential school system, their languages ​​and cultures were stigmatized and suppressed; children suffered physical and verbal, psychological and spiritual abuse; they were forced out of their homes when they were young.” How was moved and how it happened. Indelibly marked the relationship between parents and children, between grandparents and grandchildren.

Later, Francisco thanked his “heart” for “penetrating it all”, for expressing the weight carried inside him, for sharing “this bleeding memory” with him.

“Today I am here, in this land that, with an ancient memory, still guards the scars of open wounds. I am among you because The first step of this penance pilgrimage is to renew my request for forgiveness and to tell you with all my heart that I am deeply hurt: I apologize for the way in which, unfortunately, many Christians have adopted the colonial mindset of the powers oppressing indigenous peoples. I’m hurt,” Pope revealed.

Finally, he said: “I apologize, in particular, of the manner in which many members of the Church and religious communities cooperated, also through indifference, in these projects of cultural destruction and the coercion of the governments of the time.” To assimilate, which ended up in the residential school system.

“Although Christian charity has existed and there are few exemplary cases of child surrender, the global consequences of policies involving residential schools have been disastrous. What Christianity tells us is that this was a catastrophic error, inconsistent with Jesus. Gospel of Christ. It is sad to learn that this dense landscape of values, language and culture, which has given your people a sense of true identity, has been destroyed, and that you continue to suffer the consequences. Faced with anger, the Church kneels before God and asks for forgiveness for the sins of its children,” he concluded. (NA)

Samoa was one of the last places on earth to avoid COVID-19, but then Omicron changed everything