Pope Francis: Step out of the hustle and bustle and fix your gaze on the face of the child who is born 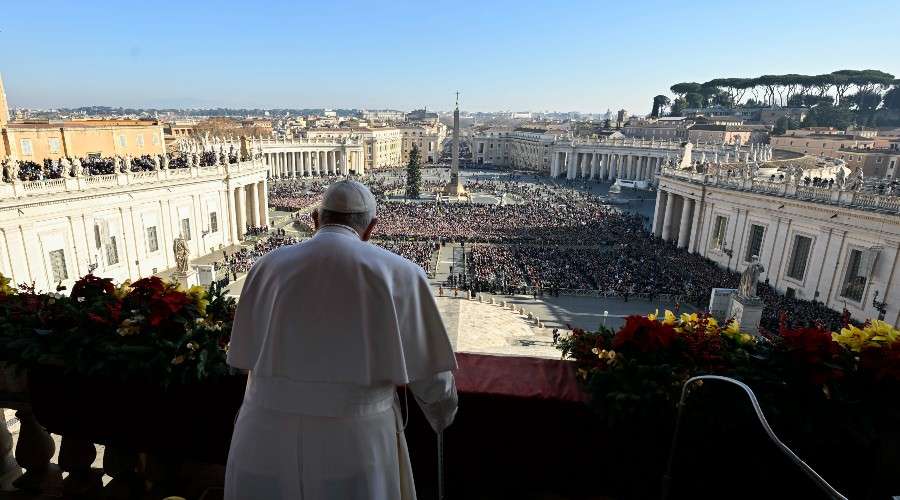 Pope Francis gave his Christmas address on the morning of December 25, where he called for “overcoming the lethargy of spiritual sleep and Fake Party Images That Make You Forget Who’s The Honoree,

before blessing city ​​and worldFrom the central balcony of the façade of St. Peter’s Basilica, the Pope said that Jesus “came among us in silence and in the darkness of the night, because the Word of God does not need reflectors or the cacophony of human voices”.

“Get out of this bustle and fix your gaze on the face of the child who is born” pic.twitter.com/TUJtP2kobJ

“It comes with our daily lives, To share everything with us, joys and pains, hopes and worries, He comes across like a helpless child,” he said.

“He is born in the cold,” the Pope continued, “poor among the poor. In need of everything, he knocks on the door of our hearts to find warmth and protection.

Next, Pope Francis invites the faithful to follow the example of the Shepherds of Bethlehem and let us “cover the light and see the sign that God has given us.”

“Let’s get out of the commotion – urged the Holy Fathers – which numbs the heart and Leads us to prepare decorations and gifts instead of thinking about the event: the son of God who was born to us”.

Pope Francis assured that “He himself, Jesus, is our peace; The peace that the world cannot give and that God the Father has given to mankind by sending his Son.

He also explained that “He, with his Incarnation, Passion, Death and Resurrection, freely opened the way from a closed world, oppressed by the darkness of enmity and war, to an open world, to live in brotherhood and peace”. “.

Along these lines, he said that if “we want this Christmas to be a Christmas of Jesus and of peace, Let us contemplate Bethlehem and fix our eyes on the face of the child who is born to us,

“And in that little innocent face we recognize the children who yearn for peace in every corner of the world,” the Pope urged.

He regretted that today “there are burdens that make it impossible to go to Bethlehem” such as “attachment to power and money, arrogance, hypocrisy and lies” and recalled “the raw winds of war that keep blowing on humanity,

“May our eyes be filled with the faces of Ukrainian brothers and sisters who live this Christmas in the dark, in the open or away from their homes, because of the devastation caused by ten months of war,” he said.

Likewise, he added that “May God draw us to carry out concrete gestures of solidarity to help those who are suffering, and enlighten the minds of those who have the will to silence the weapons and the urgent need to end this senseless war”. has the power to end it.”

“Unfortunately, it is preferred to listen to other reasons dictated by the logic of the world. But who listens to the child’s voice? “, thought the Pontiff.

“Our time is also experiencing a serious lack of peace in other areas, In other scenarios of this third world war”, he added.

Pope Francis later cited the war in Syria as “still suffering from a conflict that has faded into the background, but has not ended,” as well as those in the Holy Land and Lebanon.

“May the child Jesus support Christian communities living throughout the Middle East, so that in each of these countries the beauty of fraternal coexistence between people of different faiths may be experienced,” he added.

He also called for reconciliation of the situation in Yemen and “in Myanmar and Iran, so that all the bloodshed would stop.”

“That it exhorts the political authorities in the American continent and all persons of good will to endeavor to defuse the political and social tensions affecting the various countries; I am thinking especially of the people of Haiti, who have long suffered.

He later regretted that “a large amount of food is wasted every day and goods are exchanged for weapons, The war in Ukraine has worsened the situation, putting entire populations at risk of famine, especially in Afghanistan and countries in the Horn of Africa.

“Every war – we know – causes hunger and uses food as a weapon, preventing its distribution to those who are already suffering,” the Pope insisted.

“While we enjoy the joy of meeting our loved ones, let us think of the families who are most hurt by life, and who are suffering because of the lack of work and the difficulties necessary to live in these times of economic crisis. facing difficulties.” she added.

,Let us not forget so many migrants and refugees today who knock on our doors in search of comfort, warmth and food”, he further asked.

He also named “the marginalised, the lonely, the orphaned and the elderly who are at risk of being abandoned; We see prisoners only for their mistakes, not as human beings”.

“Like shepherds, let us go without delay and Let us be amazed by the unimaginable phenomenon of God who becomes man for our salvation”, exhorted the Pope.

“He who is the source of all good makes himself poor and begs for our poor humanity. Let us be inspired by the love of God and follow Jesus, who died to make us partakers of his fullness. freed himself from his glory.” Pope Francis concluded this Christmas.