Pope prays for an end to ‘holy’ war, refugees welcome 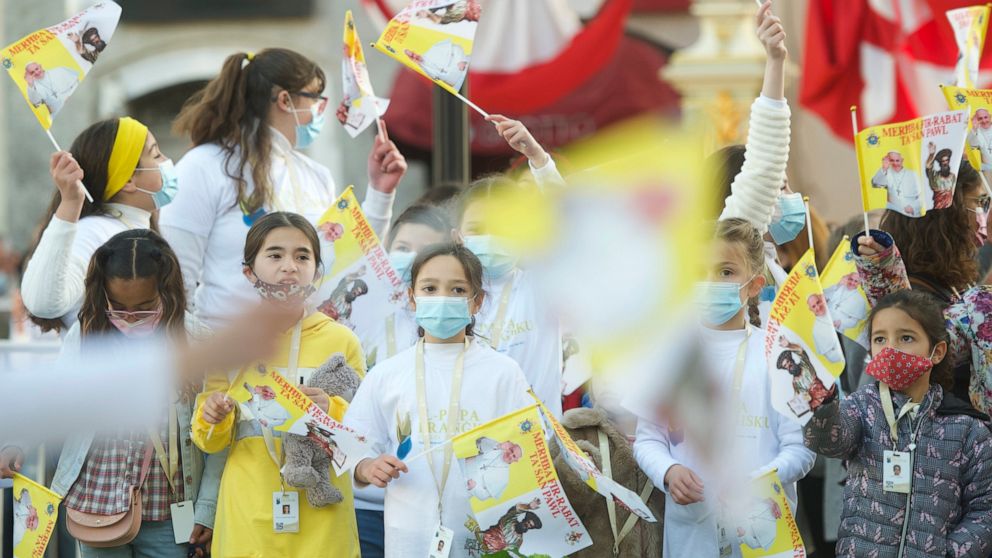 VALLETTA, Malta – Pope Francis on Sunday prayed for an end to the “holy” war in Ukraine and for the world to show compassion to refugees as he concluded a two-day visit to Malta dominated by his concern over the devastation that unleashed by Russia’s invasion.

“May we be tireless in praying and providing assistance to those who are suffering,” Francis said at the end of a Mass in Valletta, the capital of Malta, which drew 20,000 people, some of whom dropped Ukrainian flags. .

More Ukrainian flags greeted him outside a migrant shelter, where Ukrainian protesters shouted “Save our children!” and “Close the air over Ukraine!”

Francis used his two-day visit to Malta to bring home his call for Europe to show compassion to prospective refugees crossing the Mediterranean Sea from Libya. He extended that message to express his gratitude for the welcome Europe had shown to Ukrainian refugees fleeing the Russian war and his hope that the same generosity could be extended to others.

Although short, the trip was particularly stressful for the 85-year-old pope, who suffers from a chronically strained ligament in his right knee. He repeatedly struggled to get out of his chair on Sunday and his lame running from sciatica was so pronounced that he often had to grab the arm of an assistant.

Francis opened his second and final day in Malta through the Cave of St. To visit Paul in Rabat, where the apostle Paul stayed after suffering a shipwreck on his way to Rome near Malta in 60 AD. According to the biblical version of the period, the Maltese people showed unusual kindness to Paul, and he responded by preaching and healing, and brought Christianity to the islands.

Francis referred to that warm welcome that Malta showed to Christ’s shipwrecked disciple, with recent migrants from Africa paying smugglers to try to reach Europe to escape war and conflict. He told them that they could be “any one of us”.

“It is my hope that this is how Malta will always treat those who end up on its coast, and provide them with a truly ‘safe haven’,” he said.

Malta has long been at the heart of the European debate on refugee policy. The country of half a million is regularly criticized by humanitarian groups for refusing to dock rescue ships at its ports. The government argues that it has one of the EU’s highest rates in processing first-time asylum applications relative to the population, and says other, larger European countries need to do more to bear the burden.

Just this week, a German aid group called on Malta to take in 106 migrants rescued from Libya. Malta spoke softly and on Saturday the mayor of Palermo, Sicily, said the city was ready to welcome them.

While Francis praised Malta’s response in general, some migrants at the Peace Lab social services center said they had been waiting for years for their asylum claims to be processed and that Malta was really not working to integrate them.

“I need an ID card,” said Agyei Kwasi Batig, a Ghanaian who has lived in Malta for eight years. “In Europe, if you do not have an ID card, you suffer. You need documents for everything. ”

Francis’ Mass, his biggest event in Malta, drew an estimated 20,000 people. They clapped their hands as Francis urged the believers in a final prayer to “think of the humanitarian tragedy unfolding in the tortured Ukraine that is still being bombarded in this holy war.”

Among those in the crowd was Alina Shcherbyna, a 25-year-old Ukrainian who arrived in Malta just over a week ago after fleeing her bombed-out home in Dnipro and leaving behind her parents, who are both doctors.

She is an Orthodox Christian and said she attended the Mass to accompany the Maltese host family who took her on a solo train and bus journey that took her to Poland, Germany and the Netherlands before flying to Malta. Shcherbyna carried Ukrainian and Vatican flags and said she wanted to ask the pope and the world for prayers for Ukraine, saying she still could not believe what had happened in just a few weeks.

“At school we studied a lot about the Second World War, about bomb shelters and about this disaster, and we thought it was impossible in the present time. We thought it ended in 1945 and that was it. But now it is really shocking for all of us, ”she said.

Another Ukrainian Orthodox in the crowd, Margaryta Gromova, recently fled Kiev and thanked Francis for speaking out.

“He can really talk about this issue, he can pray for us,” she said. “We can feel the unity with other people, local people, the world, because we need support, like moral support, and all the support from God now.”

Follow all Associated Press stories about developments related to the war in Ukraine at https://apnews.com/hub/russia-ukraine.