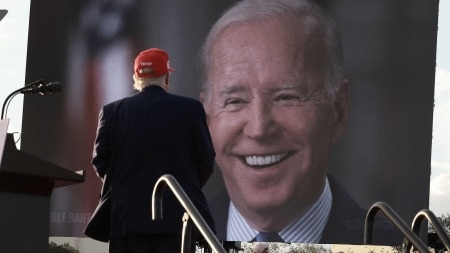 Democrat Joe Biden had his best performance in US presidential midterm elections in 20 years, but he will be forced to adjust his agenda despite defying history and avoiding a landslide thanks to his achievements, analysts said. he said.

Officials continued counting votes on Wednesday after Tuesday’s election to renew Congress in the United States, which saw a Most analysts predicted an overwhelming Republican victory because these elections are historically favorable to the opposition and because of the current state of discontent with high inflation.

However, more than 24 hours after voting had ended in half the country, Republicans still had not managed to capture the House of Representatives, a change of hands that had been a matter of hours in all previous midterm elections in which , whereas Parity in the Senate was almost total.

“The question was how big the (Democratic) defeat was going to be, if relatively small or if Biden was going to do like recent presidents who lost 40, 50 and even 60 seats in the House of Representatives. But clearly not.That if they lose the lower house, which seems very likely, it will be by a few seats,” he continued.

He added, “The Senate is still open. And the stage looks favorable for Democrats to be able to keep it.”

Valeria Carbone, PhD in History from the Faculty of Philosophy and Letters of the University of Buenos Aires (UBA) and professor in the Department of History of the United States, agreed.

“Biden made one of the best midterm elections out of three of the last four presidents,” he said.

Americans renewed the 435 seats in the House of Representatives and 35 of the 100 in the Senate yesterday, which will affect Biden’s ability to fulfill his legislative priorities between now and the end of his term in two years.

“As much as (Biden) ends up losing the House of Representatives and is down to two seats in the Senate — and I think it’s likely the Senate will continue to be 50 to 50 and Vice President Kamala Harris will continue to break the tie — that’s a very good result.” . to the Biden administration,” Carbone said.

The polls were conducted with the 2024 presidential election in mind, as Biden, 79, has indicated he intends to run for re-election and because his 2020 opponent, his Republican predecessor Donald Trump, 76, is also expected to be elected soon. The candidature is expected to be announced soon. Compete for the White House again.

For Vaesbord, a more resounding defeat for Biden might have forced him to drop his new presidential candidacy sooner.But the results of the elections are, even partially, “a victory for him” and it would be surprising if he had announced at a short notice that he would not compete in the 2024 general elections.

“He will be the president who has lost the fewest seats since (former Republican President George) Bush in 2002”said the analyst and professor at George Washington University’s School of Media and Public Affairs.

According to Vaesboard, there could be various explanations for Biden’s performance, including the fact that inflation, although it was voters’ top concern, according to polls—higher among Republicans than Democrats, among independents. It seems not, whose opinions usually tip the balance in the end.

Carbone said the forecast that inflation would be the deciding factor in the vote was based on a misinterpretation of economic reality.

Moreover, Democrats made access to abortion a campaign priority after a July Supreme Court ruling that stripped this federal right and left it in the hands of the states, taking advantage of a huge mobilization on the issue.

“The issue of reproductive rights also brought many people to the polls. This is confirmed not only in the representatives they elect, but also in the fact that in states where a popular consultation related to protecting reproductive rights was put on the ballot, the vote was yes,” Carbone said.

Finally, “it shows that Biden’s legislative agenda, which has been quite influential these two years, has had an impact,” he said.

Weisbard noted that, however, There are so few seats that Republicans must turn around to control the lower house—five—that even with a less sweeping victory than they expected, they will be able to “consistently spoil the pitch”. And thwarted Biden’s agenda, which would require compromise on many issues, but by a wide margin.

Carbone agreed, but with specifics.

Biden’s “good choice” doesn’t mean it won’t be more complicated for him to push some legislation in the coming years, but it will be a more balanced Congress. Legislation won’t be easier by a simple majority than it has been now. Till,” said.

The election didn’t go well for Trump, who predicted a “big night” for dozens of candidates, but the former president manages to appear “completely immune to reality,” Waisbord said.

“Trump is Trump and he’s not going down easy. And the Republican Party knows Trump is a major lifeline, but they keep betting on him as a way to mobilize their base, because his charisma is going to spread across the country.” I mobilize people.” Added.

Carbone called for a severance of the relationship between “Trump and Trumpism” and said that “what is coming is “Trumpism without Trump”.

“Most Trump-endorsed candidates lost. However, most Trumpist Republicans who adopted his rhetoric and are clueless about the outcome of the 2020 election won. It seems to me that the Republican Party is going to begin capitalizing on the phenomenon that I’ve seen a long time of Trumpism without Trump,” he said.