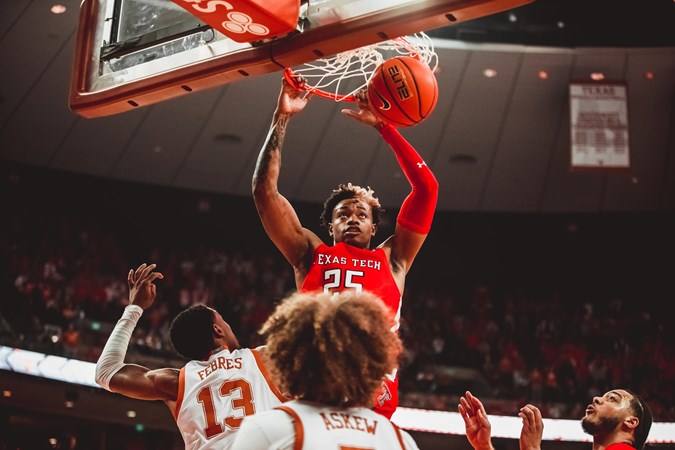 LUBBOCK, Texas – No. 9 Texas Tech is on a three-game winning streak and own a 16-0 record at home but will look to salvage a split against Oklahoma when the two teams meet up for the second time this season at 7 pm on Tuesday the United Supermarkets Arena .

The Red Raiders (21-6, 10-4 Big 12) moved back into the national top-10 on Monday after running off impressively ranked wins over Baylor and Texas last week, while the Sooners (14-13, 4-10 Big 12) ) are on a three-game losing streak with defeats to Kansas, Texas and Iowa State after their 70-55 win over Tech two weeks ago in Norman. Only three regular-season games remain following Tuesday’s game with the Red Raiders traveling to play at TCU on Saturday before hosting Kansas State next Monday in their home finale.

TTU completed season sweeps of the Bears and Longhorns last week with an 83-73 win over BU on Wednesday before a 61-55 win in Austin. Overall, Tech is on a 19-game home winning streak that dates back to last season where hit finished off the regular season with wins over UT, TCU and Iowa State. The Red Raiders have avoided being swept by an opponent this season to this point.

Bryson Williams comes into this week having scored 1,996 points in his career after leading the Red Raiders with 17 points in the win over Texas last Saturday. A fifth-year senior, Williams has now recorded 100 double-figure scoring performances and has led Tech in scoring in nine games this season. He was named the Big 12 Newcomer of the Week for the second time this season on Monday after he also had 17 points in the win over Baylor last week. Kevin Obanor led Tech with 23 points and 13 rebounds in the win over Baylor last week for his first double-double of the season and the 31st of his career. A transfer from ORU, Obanor is averaging 10.2 points and 5.1 rebounds per game this season and has 1,581 points and 821 rebounds in his career.

Williams played two seasons at Fresno State and the past two at UTEP before transferring to Tech this season where he has scored 369 points through 27 games. Clarence Nadolny scored the second most points in his career with 14 against the Longhorns, while Marcus Santos-Silva led the team with eight rebounds as reserves. Adonis Arms had four offensive rebounds and 10 points in the win in Austin to extend a streak of three double-figure scoring performances.

Mark Adams has matched Bob Knight for the best record through 27 games for a first-year Tech head coach with both starting with a 21-6 record. Knight finished with a 23-9 in his first season (2001-02) for the best record by a coach leading the program in his first season. Adams and the Red Raiders enter this week already having surpassed its win total from the past two seasons after going 18-11 (2020-21) and 18-13 (2019-20). The program record for wins came in the historic 2018-19 season where the team went 31-7 and advanced to the NCAA Championship Final. The win over Baylor last Wednesday gave the program its 16th season with 20 or more wins.

Four Red Raiders are averaging double-figure scoring coming into the 27th game of the season with Williams leading the Red Raiders with 13.7 points per game followed by Shannon (11.4), McCullar (10.8) and Obanor at 10.2. Davion Warren is at 9.5 per game while Adonis Arms is averaging 8.2 ppg. after he scored 15 against BU where he was 8-for-10 at the free-throw line. Shannon led Tech with 20 points in the win over TCU last Saturday and had scored in double figures in three straight Big 12 games for the first time this season before contributing six points and six rebounds at Texas. Williams, who has scored in double figures in 21 games this season to take his career total to 100, leads the Big 12 by shooting 53.0 percent from the field and also leads Tech by shooting 45.2 percent on his 3-pointers (28 made). Williams has led Tech in scoring in nine games this season, while McCullar has in six, Shannon in five, Arms in four and Obanor in three after his 23 points against Baylor. McCullar leads Tech with 5.3 rebounds, 3.2 assists and 1.4 steals per game. McCullar had seven points against TCU before an ankle injury with four minutes to play forced him out for the rest of the game. He will be a game-time decision at Texas.

Tech is currently on a 19-game home winning streak dating back to last season where it finished the year with home wins over Texas, TCU and Iowa State and have the second longest streak behind a 66-game one from Gonzaga. The Red Raiders have two more home games remaining with Oklahoma on Tuesday, Feb. 22 and Kansas State on Monday, Feb. 28 at the USA. Tech has had 14,000-plus fans in nine of 15 games this season and has recorded sellouts against Mississippi State, Iowa State and Texas. The program set a new attendance record with 15,300 fans at the February 1 game against the Longhorns.

RED RAIDERS vs. TOP-10 OPPONENTS
Tech has now beat a top-10 opponent in eight straight seasons, a top-5 opponent in seven straight seasons and has 27 wins over top-10 teams in program history after beating Baylor for the second time this season. The Red Raiders have 13 wins over top-10 teams since the 2015 season. Tech went 2-4 against top-10 opponents last season with a 79-77 road win over Texas in Austin on Jan. 13, 2021 before knocking off No. 9 Oklahoma with a 57-52 win in Lubbock on Feb. 1, 2021. The Red Raiders dropped their conference opener last season to No. 5 Kansas at home and fell twice to Baylor before No. 10 Arkansas topped them in the second round of the NCAA Tournament. Tech is now 2-7 all-time against No. 1-ranked opponents with a 70-57 win over Louisville on Dec. 10, 2019 in the Jimmy V Classic coming before the win at Baylor on Jan. 11.

Along with the polls, TTU is at No. 8 in the NCAA NET Rankings and at No. 10 in Kenpom.com. The Red Raiders limited the Longhorns to only 28.3 percent shooting and has now held 11 opponents under 60. Tech leads the Big 12 and is 10th nationally by limiting opponents to only 38.2 percent shooting and is 15th in the country by holding opponents to a 61.1 scoring average. The team is 12th in the nation with a 12.6 scoring margin advantage over opponents through 27 games, is 22nd by forcing 16.2 turnovers per game and third in the Big 12 with 37.6 rebounds per game after a 45-36 rebounding advantage over Texas last Saturday.

The Red Raiders have entered the top-10 of the rankings in four of the past five seasons and did it this year by working their way up from beginning as an unranked team. Tech was not ranked for the first five weeks of the season before entering at No. 25 on December 13 following a win over Tennessee in the Jimmy V Classic. TTU spent four straight weeks at No. 25 before moving to No. 19, No. 18, No. 13, No. 14 and No. 9 in the national poll. Tech’s highest Associated Press ranking in program history came at No. 6 in February of 2018 (16th Week Poll) and the program spent one week at No. 7 last season before dipping back. The 2018-19 team was No. 8 in the final week of the regular season and No. 7 throughout the postseason that led to the 2019 National Championship Final.

Tech is 12-10 in the regular season as a top-10 team coming into the matchup against OU and 22-13 when adding postseason games in program history. The Red Raiders have now won 20 or more games in 16 seasons as a program.

PROGRAM CONSISTENCY
Texas Tech has advanced to three straight NCAA Tournaments for first time in program history. The Red Raiders are 8-3 with trips to the 2018 Elite 8, 2019 Final and to the 2021 Second Round after a win over Utah State to open last year’s tournament in Bloomington, Indiana before falling to Arkansas. TTU has the third most NCAA Tournament wins over the past three tournaments with Gonzaga and Michigan tied for the most with 10. Baylor, Houston and Duke each have seven and Virginia has six.

FOLLOW US
Fans can keep updated with the Red Raiders throughout the year @TexasTechMBB on social media and at TexasTech.com.