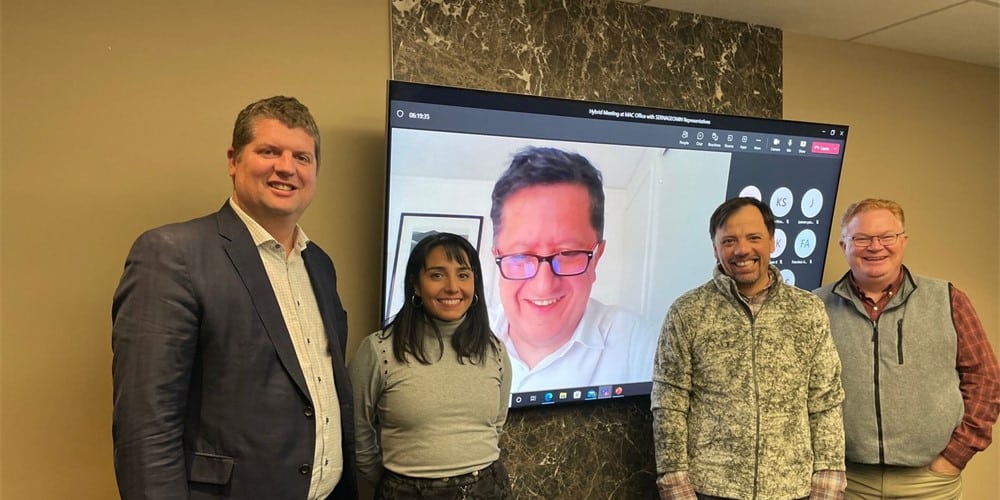 in orther to Share experiences and learn about how mining is developing in CanadaSernajomin’s Telling Team Coordinator, Gulibert Novoa, and Project Evaluation Engineer, Karina Monsalve, they met in Ottawa with representatives from academia and organizations within the Canadian mining industry.

as explained Gulibert Nova, working days allowed them Learn about the different aspects of tailings deposits in Canada,” with a somewhat different reality from Chile, especially knowing how state law is, using that as a guide for how companies manage the design, construction, and operation of tailings. Doess. They have various guides, and Canadian law always mandates that best practices are used. They provide general guidelines and are technically more oriented towards the use of this type of document. It is a different reality from Chile, because in our country everything points to Decree 248, and there they leave a little more freedom to the guidelines.

novoa said In Canada, mining companies send information to authorities about the status of construction and operation of tailings deposits.Those that verify that best practices are followed, such as the CDA or MAC guides. “as well, The Mining Federation of Canada also verifies that its members are using best practices., It is different in Chile, where the main document that the company must comply with is the resolution of the tailings deposit, which gives the parameters to be audited by Cernejomin, and the quarterly report on its operations (e-Form 700). Gives through, which is a standard form,” he said.

The professional noted that “this difference in the relationship between mining companies, legislators, mining associations and the community or mining ecosystem is not as pronounced in Chile, where The difference between a large miner and a small producer is huge.And there is no single mining union that self-regulates its members.”

Project Evaluation Engineer, Karina Monsalve, He explained with regard to abandoned tailings, that “it’s one of the pending issues that we have as a country. The situation is different in Canada, because here in Chile we have very small, medium and very large minesOn the other hand, mining there is homogeneous, and in terms of size it never reaches the dimensions that we have here in our country. There were abandoned remains in specific places, but they did not pose much difficulties to them, this is a different reality, they were located in more remote areas where people do not live ”.

Meanwhile, head of the Sernageomin Mining Project Appraisal Department, George Vargasthanked the Canadian authorities for their invitation, and insisted This mission allows the Telling team to establish a first step in its global work“and what better way to move forward than by sharing best practices and experiences between countries where mining plays a fundamental role. Through these face-to-face and hybrid meetings, the Sernageomin team , CDA, Government of Ontario, Alberta and British Columbia, ICOLD, University of Ottawa, and Chile’s Ministry of Mines representatives. opens for Allows us to share experiences that improve the quality of our work,

Finally, Vargas insisted that meetings with the three Canadian regulators, allowed us to analyze viable research and potential lines of collaboration to develop“And the meetings with the University of Ottawa are noteworthy, which can also be extended to Chilean universities, above all because the meetings were with key actors of major Canadian issues, we gave them general guidelines, they came up with a very prepared They prepared presentations especially for us and this shows the remarkable level of preparation of those who are world class experts in the field of telling.