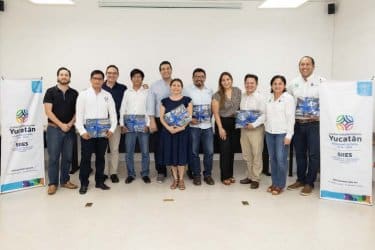 Merida, Yucatan, January 25, 2023. – Six universities through the Secretariat for Research, Innovation and Higher Education (SIES), a result of Governor Mauricio Villa Dosal’s efforts to train local talent in power electronics, a trend among technology-based companies coming to the state The professor will travel to Saskatchewan Polytechnic, Canada for a two-month learning stay.

The head of the agency, Mauricio Camara Leal, indicated that, in February, the Preah Automotive Corporation, a leader in the production of supplies for new generation vehicles, will open an engineering development center at the Polytechnic University of Yucatan (UPY), to take advantage of these opportunities Seeks to strengthen the educational offer in local higher level institutions to raise

He remarked that this is the first time that six teachers, two of whom are from UPY, three from the Metropolitan Institute of Technology (UTM) and one from the Instituto Tecnológico Superior de Progreso (ITSP), will travel outside Mexico and said in preparation Will subject, from February 1 to March 30 of the present.

“You have a commitment to disseminate and share with your students and to use this knowledge in the most optimal way; I think if you have been selected it is because you are an important piece, you have knowledge , you have the capabilities,” explained the official, accompanied by Pablo Francisco Álvarez Tostado Fernández, director of technological development and innovation.

On behalf of the beneficiary group, before the heads of UTM, UPY and ITSP, teacher Maria Jesus Espinosa Trujillo from this first institution thanked SIES for its support and the facilities of each school for this training, which began virtually in November and December 2022 with the course “Managing Learning Environments” over a period of two months.

Preh is a German firm with Chinese capital and has been on the market for more than 30 years; Focuses on artificial intelligence and electronics design for applications in next-generation vehicles as well as manufacturing processes, such as the design, production and distribution of automotive components, and climate control, driver, electronic and sensor systems.

Finally, it is worth mentioning that, during their stay, those selected will take classes in English; Also, they will have a cultural experience as well as visit some of the companies in the region.