Program to admit 30,000 migrants per month begins in EU 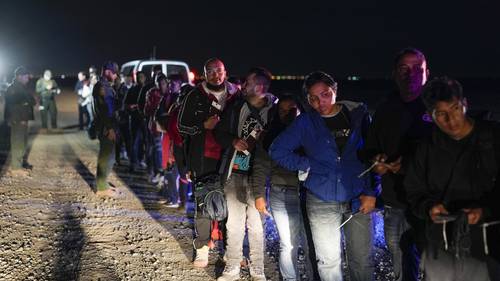 Yesterday began an expansion of the program through which the United States will admit 30,000 migrants per month from Venezuela, Cuba, Haiti and Nicaragua.

In a telephone press conference, Blas Núñez-Neto, the undersecretary of the US Department of Homeland Security, warned migrants about the risk of falling into the hands of smugglers and stressed that applying for the program, which is free, Applicants should do so on line from their home countries.

In addition, in a message issued by the Embassy of the United States, Ambassador Ken Salazar warned “to all those who want to immigrate without papers at the border of the United States and Mexico: now the migrant corridor is a very difficult corridor”. With a lot of pain, full of crime, full of organized crime.”

For this reason, he said, his government asks that “they do not reach that corridor.”

Referring to the visa program for Venezuelan, Cuban, Haitian and Nicaraguan citizens, Salazar said it was a way to get to the United States, but warned that “you have to follow the law, because if this or that Population comes to the limit, they will not be allowed inside.

He called on migrants “not to be swayed by criminal organizations” of human traffickers.

For her part, Núñez-Neto explained that the United States has seen a significant increase in emigration by sea from countries such as Cuba and Haiti since the past week, which she considered, “putting migrants’ lives at greater risk than dangerous conditions.” Being of the sea”.

To protect more immigrants from the danger of traveling to the US without documentation, starting next week, they will enable a segment on the CBP One digital platform to find out where they can already file their paperwork, the official said. whether they are eligible to go to that country.

“To all citizens of Haiti and Cuba who are considering boarding a ship to arrive illegally by sea, I would like to stress that the new process we have announced is very fast and secure, and it that they do not risk their lives at sea.” , she added.

He stressed that a sponsor legally established in the United States is needed to wish to reap the benefits of the new measure, in addition to registering via the Internet and presenting a series of data.