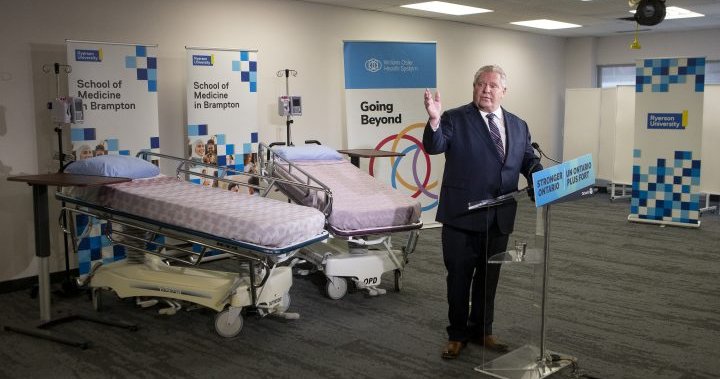 Ontario Premier Doug Ford announced additional funding to expand health care in the city of Brampton at an event on Sunday.

Ford, who was joined by Ontario City Health Minister Christine Elliott and Brampton South MPP Prabmeet Sarkaria, said the province would give $21 million to William Osler Health System for expansion.

“This funding will help transform Peel Memorial into a new inpatient hospital with a 24/7 emergency department and expand cancer care at Brampton Civic Hospital,” said a press release from the province.

A total of $18 million will be used to expand its urgent care center to allow Peel Memorial to operate 24 hours a day and $3 million will be spent on the civic hospital.

“We’re doing it for the people of Brampton,” Ford said in the announcement.

The Ontario NDP criticized the incident, calling it an “election-time promise”.

Sarah Singh said, “It is devastating that Doug Ford has delayed investment in the Brampton families who hoped they would get cancer treatment closer to home and would not be in the ER budget for Peel Memorial – only for future years.” There is a plan to get a plan for it.” The party’s deputy leader said in a statement.

Last year, Ford visited the city to announce the expansion of Peel Memorial Center, which opened in 2017 as a facility for outpatient services, day surgery and urgent care.

“The population is booming as thousands of people call Brampton home every year,” Ford said.

The move was announced as part of a $30 billion, 10-year expansion and renewal plan for hospitals in Ontario.