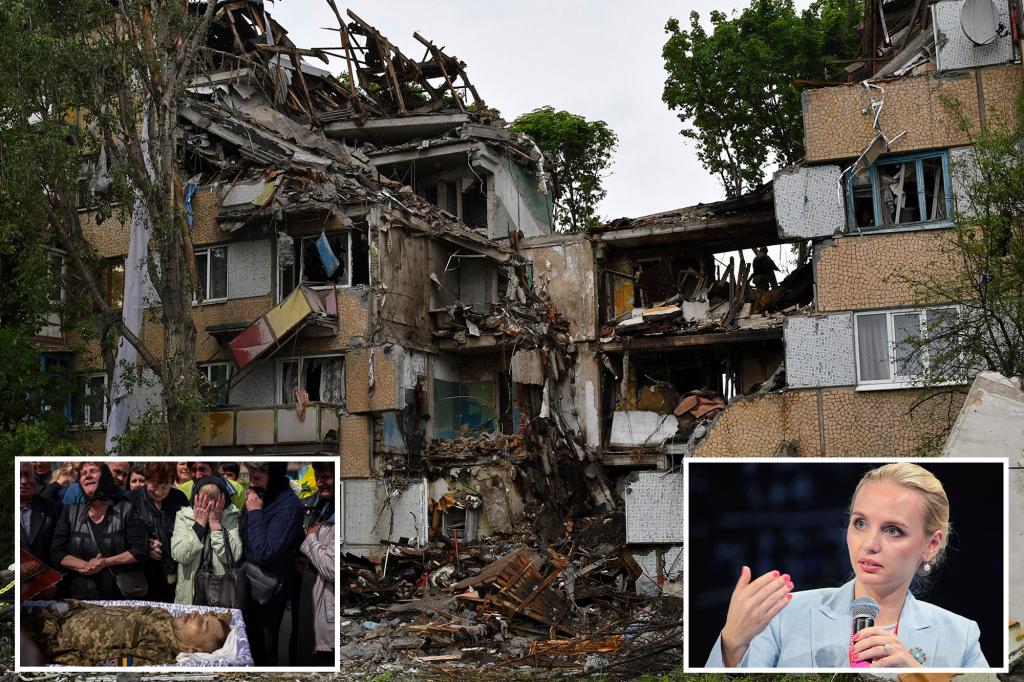 President Vladimir Putin’s daughter Maria Vorontsova slammed the US and the West for trying to undermine Russia’s economy, and likedned Russians to Jews in Nazi Germany in leaked social media posts, according to a report.

Vorontsova, 37, was identified as the person behind a secret “Maria V” account, which has attacked critics of the Ukraine invasion on an alumni group on Telegram for her alma mater Moscow State University, the Times of London reported.

In screenshots obtained by the editor-in-chief of anti-Kremlin Russian news outlet Republic, Putin’s eldest daughter defended Moscow’s actions and claimed the West had “always done everything possible to ensure” that Russia failed.

“If suddenly, like almost happened in the 90s, Russia becomes a full-fledged raw-material appendage of the United States and EU, I’ll be interested to see whom you blame for the fact that we’re not living in a prosperous economy,” Vorontsova reportedly wrote.

In the conversation about Ukraine, Vorontsova also mentioned how the US also starts wars and slammed comments about her father’s responsibility for the invasion.

“What naivety. That’s child’s talk,” she reportedly said. “Blaming everything and putting all responsibility on one person is the same as putting your faith in one person, like a tsar. Same crap.”

She then brazenly compared Russians to Jews in Nazi Germany.

“We are not like the Germans in the 1930s, rather like the ones whom they banished,” Vorontsova added, according to Newsweek.

The pediatric endocrinologist — Putin’s daughter from his first marriage — also ripped a user for using the word “annexation” to describe Russia’s 2014 occupation of Crimea, claiming the term overlooked “the will of the people,” referring to a referendum on the seized territory , the Times of London reported.

“Nobody in the West needs our country to be prosperous,” one post attributed to Vorontsova said, Newsweek reported.

“They’ve always done everything possible to ensure this doesn’t happen. And they’ll continue to do so,” she allegedly said.

However, Republic’s editor Dmitry Kolezev wrote that Vorontsova’s messages suggested she didn’t “directly approve” of the war in Ukraine.

He said she generally backs the Kremlin’s claim that Russia “is not an aggressor, but a victim, and is forced to defend itself,” Newsweek reported.

The posts had reportedly been shared on a group for 170 alumni of Moscow State University’s medical department, where she graduated in 2011.

Kolezev reportedly said chat room sources and a journalist told him that the “Maria V.” The account belonged to Vorontsova, and that personal details she shared reflect what is known about her publicly.

Vorontsova, who has also been identified as Maria Putina, and Putin’s other daughter, Katerina Tikhonova, were among the people sanctioned last month in the latest round of US and European economic penalties over Russia’s invasion of Ukraine.

The European Union enacted similar sanctions against the daughters.

Putin has rarely acknowledged the two daughters, who are believed to be the children of the Russian leader and his ex-wife Lyudmila Putin, a former flight attendant. The couple was married for nearly 30 years before divorcing in 2013.

The Kremlin leader is widely rumored to have other children, though their identities have never been confirmed. The White House said the sanctions affected Putin’s “adult children.”

IND Vs ENG: India’s situation is grim, one by three batsmen return cheaply

WFP: Ethiopia’s combined drought and conflict would be ‘devastating’