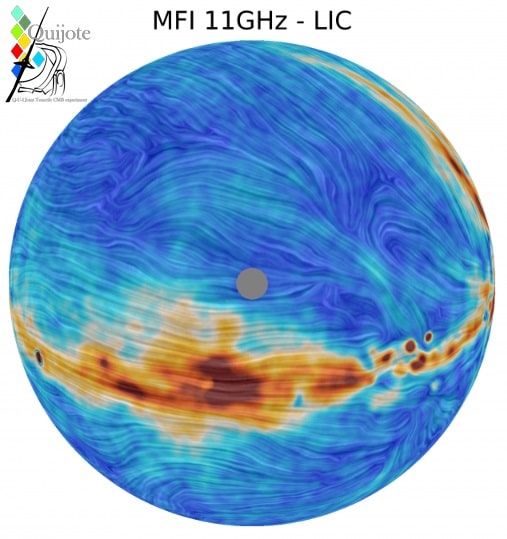 The unveiling of the galactic veil is essential for the discovery of cosmological B-modes in the Cosmic Microwave Background (CMB) polarization. The galactic veil is polarized microwave emission from the Milky Way, which allows us to reconstruct its magnetic field. Quixote Experiment (QUI Joint Tenerife Experiment) publishes six articles in MNRAS, including their first results on the galactic veil, following their observations between May 2013 and June 2018 (∼9000 hours). MFI Instrument (multifrequency instrumentto obtain intensity (I) and polarization (Q and U) maps in four frequency bands at 11, 13, 17 and 19 GHz, covering almost the entire Northern Hemisphere; The obtained sensitivity is between 35 and 40 ❜K per degree and per beam. A great job from the QUIJOTE collaboration, but one that leaves honey on our lips. Expected cosmological results from QUIXOTE, CMB polarization maps from TGI instruments (thirty-ghz instrument) y FGI (40-GHz instrument), will be published in eight future articles.

We all remember the BICEP2 fiasco (LCMF, March 17, 2014), whose observed r = 0.20 ± 0.07 was the product of the galactic veil (polarized emission from dust). Recall that R is the quotient between the tensorial and scalar primordial modes, i.e., the ratio of the energy of the Fulton field that is transferred to space-time to that of the quantum fields during reconnection; The observation of a value r > 0 means the observation of early gravitational waves and the starting gun for the Nobel Prize for cosmic inflation. The design goal of the Quixote was to observe the B mode if R ~ 0.1; Unfortunately, the Planck Space Telescope results, together with BICEP/Keck 2018, constrain r < 0.032 at 95% CL. QUIJOTE’s new results provide a map of the polarized emission of synchrotron radiation in our galaxy (particles emitted by it). ultrarelativistic charges that move in the galactic magnetic field). The synchrotron radiation between 11 and 23 GHz is estimated to have a spectral index 𝛽 = −3.07 ± 0.16, a wider distribution than previous observations; Almost all of the polarization observed is in the E mode, with the B mode being the ratio of BB/EE = 0.26 ± 0.07 for the multipole ℓ = 80, the EB and Tb signals are consistent with zero for 30 ≤ ℓ ≤ 150.

The figure shows an estimate of the galactic magnetic field in the northern hemisphere (as an estimate of the magnetic field actually projected onto the plane of the sky) at 11 GHz with the arctan (-u/q) polarization angle rotated 90 degrees). The gray circle corresponds to being centered on the north pole (in the figure that opens this piece the gray band is in the galactic plane and the large gray area on the right corresponds to the southern hemisphere which is not viewable from Tenerife). Those who wish to enjoy the different maps (I, Q, U) in each of the four MFI frequency bands should consult Article IV. All these maps are produced by a code called PICASSO, which is based on the MADAM method, adapted for QUIJOTE MFI.

The maps obtained by MFI at 11 GHz for the E mode and B mode of the synchrotron radiation show the expected characteristics. The region for the E mode is much brighter than that for the B mode, showing the typical quadrupole structure (two positive and two negative lobes) and a 45° rotation of the B mode map with respect to the E mode map. point sources (the planet Jupiter and Venus, Tau A, Cas A, Cyg A and 3C274 sources), which are discussed in detail in Section IV; Article V analyzes the galactic regions IC443, W49 and W51. The polarization of anomalous microwave emission (AME) associated with dust grains rotating in the direction of IC443 is not observed, detected at 4.7 σ for W49 and 4.0 σ for W51.

additional unpolarized microwave emission in the galactic center, the so-called haze (haze), featured in Article VI. It obeys a power law with spectral index 𝛽(H) = −2.79 ± 0.08 between 11 ≤ ν ≤ 70 GHz, which is higher than the value estimated in previous studies (∼ −2.5 for 23 ≤ ν ≤ 70 GHz). between), although lower than that estimated for synchrotron radiation 𝛽(S) = −2.98 ± 0.04. In addition, there is a (potential) first detection of polarization in the haze (though with low statistical significance, so it cannot be ruled out that its origin is the curvature of the synchrotron spectrum in that region).

Anomalous microwave emission (AME) has also been observed due to dust rotation; This diffuse component is observed in the range between 10 and 60 GHz, with an estimated peak at ~30 GHz. In article VII it is characterized using 52 candidates for compact sources (as shown in the figure). The peak of the spectrum of this emission is observed at 23.6 ± 3.6 GHz, which is approximately 4 GHz lower than estimated in previous studies. Furthermore, a correlation of the order of 88% has been observed between the thermal emissivity of the AME and the dust of the interstellar medium; However it is still unclear whether the emission has its origin in the cold or warm phases of the medium.

Galactic cover in polarization is estimated by combining MFI data at 11 and 13 GHz with the K and Ka bands from WMAP and the all-polarized Planck channel (PR4). Spectral index maps have been obtained bs (as shown in the figure) and a constant curvature of the synchrotron radiation is assumed to be Cs = −0.0797 ± 0.0012; Maps are estimated with equal importance if they are fitted without curvature and with curvature (future studies will have to clarify if curvature is necessary). Finally, a list with 786 radio sources observed in intensity and polarization is obtained in article VIII; The results of the statistical analysis of these sources are in line with those expected from the literature.

In short, I can’t deny that the new Quixote MFI results on the Galactic Veil have me a little disappointed; I haven’t found surprises that hold my attention. But I also won’t deny that I’m looking forward to the cosmological results from the TGI and FGI instruments, which I think promise to be much more interesting. Nevertheless, the characterization of the contribution of synchrotron radiation and anomalous microwave emission to the galactic veil should not be underestimated; Without this the great long-term goal of observing cosmological B-modes and their accompanying primordial gravitational waves will be difficult to achieve.