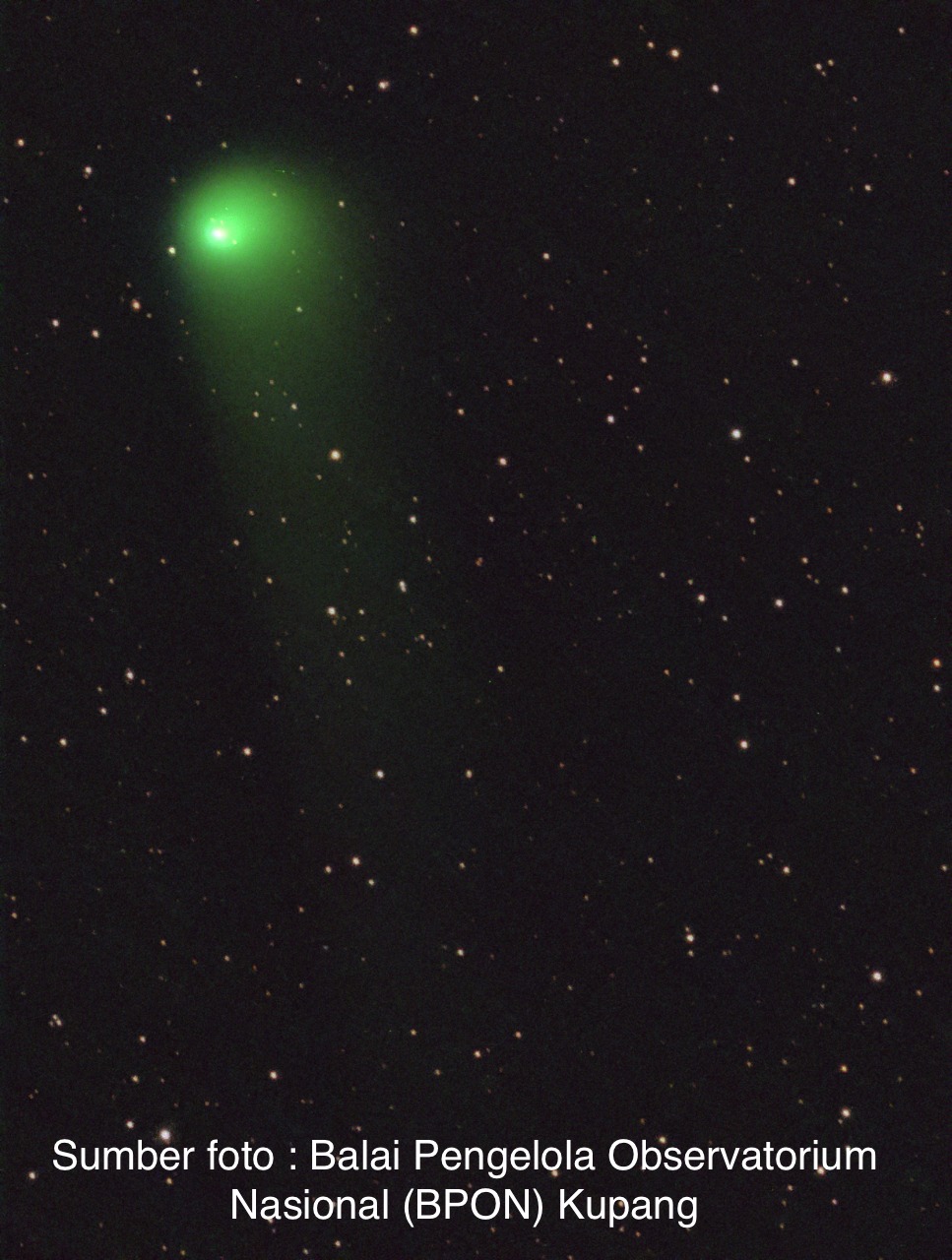 Bandung, July 25, 2022, Various natural phenomena are very interesting to the public. Apart from the natural events that we usually see every month, there are rare events that only happen every few years or even decades. One of the interesting and rare events is a comet passing near the planet Earth.

National Research and Innovation Agency (BRIN) researcher Abdul Rachman, as coordinator of the Kupang National Observatory Management Center (BPON), said comet C/2017 K2 (PanSTARRS), or K2 for short, passed Earth. The comet is believed to have come from a location in the outer part of the Solar System called the Oort Cloud. The comet’s initial C is non-periodic, the number 2017 indicates the year it was discovered, and the combination of letters and numbers K2 indicates the order in which it was discovered in 2017.

“This comet passes closest to Earth on July 13, 2022 at a distance of about 2 times the Sun from Earth. Currently K2 is moving towards its closest distance from the Sun which is expected to happen in December this year. Because it Also included in the non-periodic comet group, K2 does not regularly pass near Earth like Halley’s Comet, which has a period of about 83 years, so it is not known when it will pass by Earth again.” he explained.

Abdul reveals K2, which was discovered by the Comet Monitoring System Panoramic Survey Telescope and Rapid Response System (PanSTARRS) located in Hawaii on May 21, 2017. The comet is believed to have originated from the Oort Cloud, a collection of objects in the outermost part of the Solar System.

Read Also:  In the wild: Animals the latest frontier in Covid-19 battle

The comet’s closest appearance to Earth, K2 exhibits a dust tail and a gas tail. The closer to the Sun, the more clearly the tail of the gas will be visible.

“When passing close to Earth, K2 can only be seen if you use a telescope, especially because it coincides with the full moon. However, as the comet gets closer to the Sun, it can be seen with binoculars. All regions on Earth’s surface have the opportunity to see the comet on a clear night,” Abdul said.

He said that it is possible to study the possibility of a comet falling to Earth through research from the event of a comet passing through the Earth. In the case of K2, the comet passed the Earth at a distance of more than 270 million km so that it would have no effect on Earth. And because it is far enough away from Earth, which is about 2 times Earth’s distance from the Sun, it doesn’t have any negative effects.

“Comet K2 on BPON was observed for several days from July 13 to 16, 2022 at the Olanasi Village Operations Office and Science Center. Observations were carried out for several hours every day. The data collected was used not only for research purposes, but it can also be used for astrophotography,” he said.

Read Also:  When and at what time will there be meteor showers at the end of July 2022? See how to spot this rare event - around Lampung

“For observation, a telescope that uses a mirror measuring 25 cm and a CCD detector equipped with multiple color filters is used,” he said.

The head of the Center for Space Research, Emanuel Sunging, said the observational data could be used for research not only by BRAIN researchers, but also by all those involved in studying the dynamics of objects in the Solar System. has an interest in.

“From the observable incarnations of the comet’s two tails (dust and gas), it is possible to gain an understanding of the comet’s intrinsic properties, as well as what the space weather conditions were like at that time. In addition, from the comet’s visit, at least By December 2022, it remains to be seen whether the comet will end its life after colliding with the Sun? Or continue its trajectory out of the solar system? How was the journey then?” They said.

The passing of the comet is a good opportunity for scientists to observe the comet more closely and for astrophotography workers to photograph it. Each comet has a peculiarity that is interesting to study scientifically and capture its presence through camera shots.

“The biggest hope from such small observations is to provide insight and information to Indonesians, that Indonesians already have an astronomical observatory in the East Nusa Tenggara region that can be used for space research with Brin , he hoped.

Vikings Hall of Fame center Mick Tingelhoff, who never missed a game in 17 seasons, dies at 81