Rate of COVID-19 cases among young BC children trending downward

The number of young children catching COVID-19 in British Columbia has decreased significantly since the end of September, according to new data released Tuesday.

The latest surveillance data, shared by provincial health officer Dr. Bonnie Henry, shows children between the ages of five and 11 are still being infected at a higher rate than other age groups in the province, but that the situation has improved significantly in recent weeks.

The last time the data was presented, a few weeks after the beginning of the school year, health officials were sounding the alarm about a “dramatic increase” in cases involving young children who are not yet eligible for vaccination.

“As case rates are coming down across the board, we’ve also seen, thankfully, a dramatic drop in case rates among school-aged, younger children,” Henry said. “And we continue to see a low rate in the 12- to 17-year-olds, particularly in the areas where vaccination is high in that age group.”

Henry said the drops have been particularly pronounced in the Interior Health and Northern Health regions, which both saw higher rates of infection among school-aged children last month compared to the rest of the province.

Vaccination rates in both health authority regions are lagging behind other parts of BC, and Henry noted the previous spike in cases among young children mirrored increases in the wider community.

None of the young patients were admitted to intensive care, Henry said. 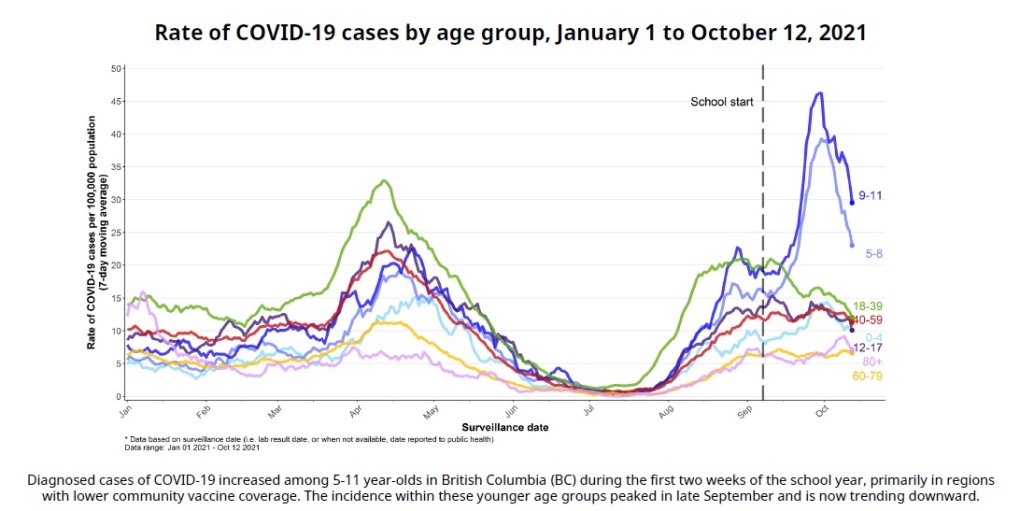 Some parents and teachers were anxious heading into the school year, particularly given the spread of the highly contagious Delta variant, and pressured the government to expand BC’s school mask to include all students from kindergarten through Grade 12. Previously, the mandate only applied to students in Grade 4 and above.

Henry acknowledged there has been an increase in transmission at schools, but noted the data still indicates most kids catch COVID-19 in other settings.

The provincial health officer presented school transmission data from Interior Health showing there have been 80 clusters at 46 schools in the region so far this semester.

“A total of 314 cases were linked to these clusters, which is about a quarter of the cases among that age group in the region,” Henry said.

The median number of people involved in the clusters is three, compared to a median of two recorded last year.

“We know there was a lot of anxiety going back into school this year, and it’s important for us to provide this information as best we can so people know the situation.”

Data on case rates among children and transmission in schools will be released by the BC Center for Disease Control on a monthly basis going forward, officials said.