Raveena Tandon Is Crazy About 90s Trend, Here’s How 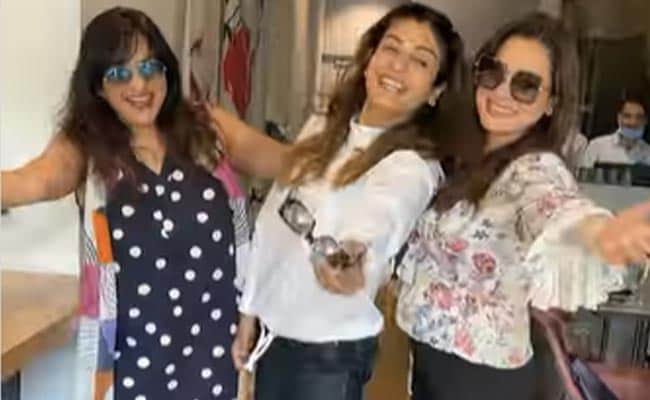 Raveena Tandon’s social media uploads are unbeatable. Agree? She always keeps us entertained with her antics. From showing off her travel diaries to sharing details about her pet pooches, Raveena Tandon loves to keep us posted. Now, Raveena Tandon has told us how much she loves the 90s trends. Her latest video is proof. Raveena Tandon shows us the accessories that she loves. And guess what? They belong to the 90s. The actress captioned her video, “Take one and take two. Mera style bhi 90s. Mere dost bhi 90s.. and sachi muchi [My style is 90s, my friends are 90s, and truly speaking], my jeans and shoes and bag all preserved from the 90s and me too.. hahahah. Us too. Anita Loomba and Neelam Kothari Soni walk off.”

Earlier, Raveena Tandon posted a video where she stands behind a man. While the man ties a turban around his head, Raveena is twirling with her scarf. She captioned the video, “I bombed this reel! I wanted to do a nice reel with him, and ended up looking like such a loser in front of his poised royal elegance.” Take a look at the video:

Raveena Tandon has also amazed us with a photodump from one of her safari trips. Her post also included the impressions of a wild cat on the soil. She captioned the post, ” Safari-style dump … Moods of the day. Following the pantheras tracks.”

Recently, Raveena Raveena Tandon and Anil Thadani celebrate their 18th marriage anniversary. They made headlines with Raveena Tandon’s adorable post about their 18 years of togetherness. Read more about it here.

On the work front, Raveena Tandon was last seen in Aranyak. The actress will next appear in the Kannada film KGF: Chapter 2,