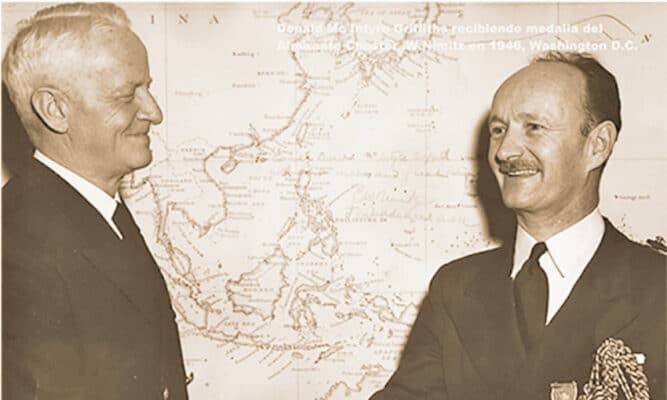 While reviewing the life of a great and visionary naval officer, one cannot leave out the part of his life dedicated to the institution he loved, as well as the circumstances that led him to command the 3rd Naval Area. In – Williams to materialize the foundation of Puerto Luisa, (formerly Puerto Luisa) on the southern tip of continental Chile, during 1953.

Consequently, this brief write-up will, first, consider the biographical aspects of Admiral Donald McIntyre, then highlight the most relevant professional aspects, and conclude with the last years of his life after his retirement from the Navy.

Donald Malcolm MacIntyre Griffiths, born in Valparaiso, November 11, 1903, son Scottish father Donald McIntyre and mother Of Welsh descent, Isabel Griffiths Lyon. Before entering the Naval Academy, he completed his schooling at The Mackay School in Viña del Mar, which was characterized by providing a quality education to its students with special emphasis on the development of character in a friendly environment. which encouraged personal effort, strength and endurance, aspects that without doubt marked and shaped the character’s personality.

professional life
in the navy

His strong vocation for service led him to start his career at the age of 14.Studying at the Naval School in February 1918, graduating on December 15, 1922 as a midshipman. Once graduated and after serving as an officer in various units of the National Navy, in 1928 he was assigned to the Naval Telecommunications School, a specialty he chose because it coincided with the advent of radio—a new Very attractive because of the features, technology involved and its high impact on naval operations.

In March 1929, the third telecommunications specialty course was completed for officers composed of representatives of the Navy and the Army. The course, under the personal tutelage of Commander Alberto Brito, worked physically in the Naval School’s New Officer’s Casino. The new naval specialists were First Lieutenants Luis Andrade Lema, Enrique Lagres Echavarría and Donald McIntyre Griffiths, and Second Lieutenants Alfonso Zelada Muñoz and Oscar Lara Delpin.

Between 1930 and 1932 he served as an officerInstructor at the same School of Telecommunication, on which occasion he demonstrated his excellent professional preparation by preparing a manual on radiotelegraphy. Said text came to fill an urgent teaching need in the specialty and constituted an enduring reference source for many decades among generations of officers and sailors, highlighting his vocation as a teacher.

He completed his first command in 1934 aboard the Sibbald cutter, where he was portrayed as an officer of outstanding human qualities, as well as his ability to command ships, a reputation that would not desert him throughout his career. In this ship, he navigated the Moulin River, the largest tonnage ship ever to enter that estuary.

Between 1936 and 1939, he served as head of studies at the Naval School, educating future sailors, going on from 1940 onwards to various units of the squadron. He was promoted to frigate captain in March 1943, taking over as commander of the destroyer Hayate. A year later, in February 1944, Commander-in-Chief The Navy arranged for the Peruvian steamer Apurimac to accompany Hyatt on the night of October 17, 1943, to enter a note of merit in his service record for the difficult and risky commission he had accomplished auxiliaries in bad weather and sea conditions. Between World War II.

At the end of this world war, he was appointed as a naval attaché to the Chilean embassy in the United States, serving between 1944 and 1945, later in the port of New York, as the flagship of the new flotilla. taken. The frigate is composed of units purchased in the United States by the Chilean government. He is in charge of transferring these units to Chile on July 1, 1946.

Serving as Navy Addict, Commander-in-Chief of the Navy United States Admiral Chester W. Nimitz presented him with the insignia of the “Legion of Merit” decoration. For his distinguished services in the areas of coordination and understanding between the two navies. Back in the country, in 1946, he was promoted to captain of the ship and appointed to the post of director of the Escuela de Grumatees, an institution of fundamental importance for the training of future employees, a position he held for three years. Stay on In this way, he consolidated his vocation as a teacher and instructor between 1936 and 1939, and between 1946 and 1948 in the valuable work of training sailors.

After his career in education and training, the Commander-in-Chief of the Navy asked him to serve as the commander of a training ship.Midshipman, the oldest ship in the Navy and one of the oldest ships, the cruiser Chacabuco. Thus, in 1950, he assumedCommander of the said cruise, the unit in which he undertook two Midshipman Courses training voyages. On January 20, 1951, he was assigned once again to the United States, receiving command of the cruiser O’Higgins (the former USS Brooklyn).

Under his skilful and skilful leadership, in a short time, this cruiser was manned safely and efficiently by the entire crew and this allowed O’Higgins to join the Chilean fleet in September of that year. lives as Commander of the said cruise until November 1952. During that year, he had the painful mission of rescuing a sunken ship from the Chilean Navy’s ocean-going tug Brito, a task in which he proved, once again, the “extraordinary position for ships to operate together”. Gave. with great courage, a certain quality which distinguishes a gentleman at sea”, according to This is expressed in a personal note sent by the Secretary of the US Navy to express gratitude for saving an American non-commissioned officer from the wreckage of a ship that was aboard a tugboat.

In December 1952, he was promoted to rear admiral, serving first as General Director of Naval Personnel and later as Commander-in-Chief of the Third Naval Area. In this last position, he laid the foundation of Puerto Williams, formerly Puerto Luisa, establishing a naval base there, thus consolidating our land sovereignty andSea in the waters of the Beagle Channel. This policy of true exercise of effective sovereignty continued further and further with the establishment of small naval detachments in the stormy zone on Picton, Lennox, Nueva and Diego Ramírez islands, which years later would be claimed by Argentina.

Additionally, in 1954, at the request of some settlers and settlers, at the mouth of the Baker River, and being Commander-in-Chief of the III Naval AreaIn 1955, Admiral McIntyre provided assistance for the needs of these settlers, as well as building a Caleta Tortel lookout and signal post manned by Navy personnel (telegraph operator and a nurse) in 1955 and beginning the construction of the first houses that are present. Will give birth to commune. The name “Tortel” comes from Jean Tortel, a French sailor who served during the Chilean War of Independence.

Undoubtedly, the geopolitical perception of these facts is a clear example of the better preparation and geopolitical vision that Admiral Donald McIntyre Griffiths had for the needs of his organization and his country.

He was called to retire on April 26, 1955, by decision of the government of the time, for “zealously defending the interests of the motherland”. In the wake of what was expressed by Mr. González Madariaga in Senate Session No. 28 of August 31, 1955, which provoked intense debate and investigation between the Senate, the Chamber of Deputies and the government of the time. His retirement from the Navy in 1955 was deeply felt and commented upon by his subordinates, who expressed regret at the removal of this Naval Chief who marked a significant milestone in the institution that had sheltered him for 35 years. Gave, demonstrated clear leadership as well as always endeavored. Being an excellent teacher, trainer and driver of naval personnel in various grades and categories of his institution as well as having a clear and precise geo-political vision without compromising on the defense of national interests, even if it involves influencing himself Contribute to

In his 35 years of service to Donald McIntyre, he received various decorations Such honors, conferred by Chile, the United States and Mexico, did nothing more than recognize his professional and human qualities, which reflected his character, professional training, loyalty and patriotism.

years of his life

Once out of retirement on September 1, 1960, and while he was serving in the Southern Area, Donald McIntyre created Mixed School No. 3 to support the education of the children of civilians and sailors in the then commune of Navarino, Lived where there were some families. This is the origin of the current “Donald MacIntyre Griffiths High School”, which bears his name in recognition of being the only educational facility located in Puerto Williams and recognized as both the “southernmost high school in the world” Received. Due to having the status of “Liceo Bicentenario”.

In the knowledge of his retirement, and based on his outstanding career and recognized professional potential, the Pontificia Universidad Católica de Chile offered him a role in the Civil Engineering School, where he would inspire several generations of students with his discipline and civic spirit. Let’s train. Civil Engineering. After a few years in that position, he rose to the position of general treasurer of that university. Parallel to this and thanks to his great sense of work, he works as manager of “Empresa Sociedad Embarcadora del Muelle de Caldera”. In 1970, he walked away from both activities for good, leaving behind deep memories of justice, dedication and excellent treatment of all who worked around him.

Finding himself cut off from all activity, the Supreme Government offered him the post of Ambassador to Australia in 1974, which he left in early 1975 for health reasons. During my years as a cadet at the Military School between 1978 and 1981, I had the opportunity to visit him at his home – on several occasions – always receiving from him solid and timely advice about military life. Donald McIntyre died in Santiago on August 15, 1987, and his remains rest in a strict grave at the Santiago General Cemetery, on whose grave only his name stands alongside that of his beloved wife, Rita Dagino McDonald.