Aluminum is one of the most commonly used metals on planet Earth for several reasons. First, because it is easy to remove and is present in large quantities (it is the third most common element found in the Earth’s crust). And, second, because it has so many uses.

If considered as an energy storage medium in a battery, aluminum has an energy density 50 times greater than that of lithium ion. That’s why Swiss scientists are developing this technology as a storehouse of renewable energy for the cold European winters.

The problem is quite simple: As countries around the world plan to move towards zero-emission energy, they will have to deal with the intermittent nature of renewable energy.

On a daily basis, solar power harvests most of its energy in the middle of the day, which requires some kind of short-term storage solution that can park that energy in a battery of some sort, then release it for later. Is.

Large battery projects of this type are already established in many areas, which proves their effectiveness. But intermittent seasonality is a huge problem. The further away from the equator, the less sun it receives in the winter months.

Parts of northern Europe are famous for not having sun for months, leading to a severe solar power shortage every year, as everyone starts turning on their heaters.

The world needs a way to store the massive amounts of renewable energy generated in the warmer months, then release it during the long winter. And it has to be economical, otherwise it’s not going to happen.

Researchers at the Solar Institute of Technology (SPF) in Switzerland have been studying the redox cycles of aluminum for many years and, with funding from the European Union’s Horizon Europe program and the Swiss government, have developed what seems like a very promising idea.

According to a 2020 report, a cubic meter block of aluminum can chemically store enormous amounts of energy: About 23.5 megawatt-hours, more than 50 times that of a lithium-ion installation.

That’s enough to power the average American home for 2.2 years by 2020. If we look by weight, aluminum has a specific energy of 8.7 kWh per kilogram, which is about 33 times more than the batteries Tesla uses in its Model 3.

The entry and exit of that energy is far more complicated. During the “charging process”, additional renewable energy will be used to convert aluminum oxide, or aluminum hydroxide, into pure elemental aluminum. 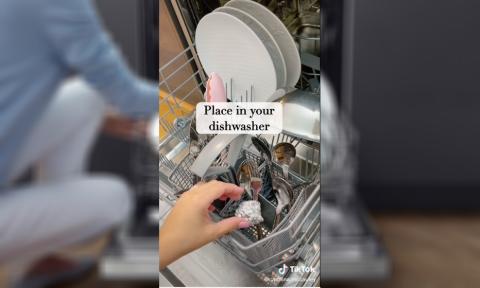 Why should you put a ball of aluminum foil in the dishwasher every time you wash it?

is about An industrial electrolysis process, which requires temperatures of approximately 800 °C, as well as novel inert electrodesIf you want to avoid carbon dioxide emissions with existing conventional aluminum smelting processes.

The team estimates that it would be possible to “charge” such an aluminum redox system with an efficiency close to 65%. All of these raw materials are relatively cheap and abundant, with the added benefit of being very easy to store and transport.

Without a doubt, this seems like the great solution for storing the energy that we lose every day because we don’t have the storage capacity for that much electricity.