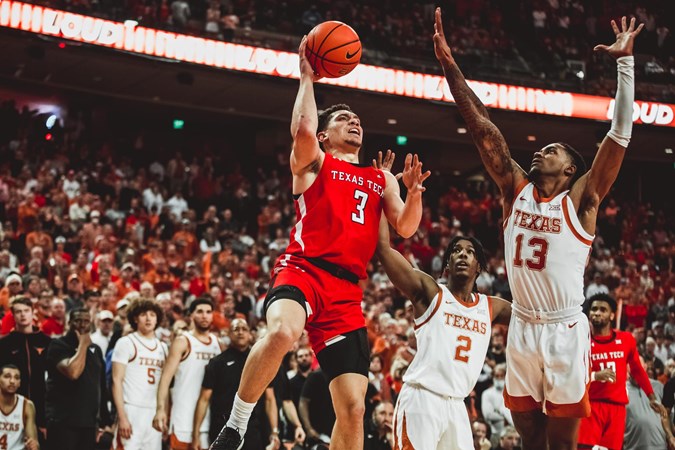 LUBBOCK, Texas – Texas Tech has returned to the top-10 in the Associated Press Top 25 and USA TODAY Coaches Polls at No. 9 in both polls.

Along with the polls, TTU is at No. 8 in the NCAA NET Rankings and at No. 10 in Kenpom.com. The Red Raiders limited the Longhorns to only 28.3 percent shooting and has now held 11 opponents under 60. Tech leads the Big 12 and is 10th nationally by limiting opponents to only 38.2 percent shooting and is 15th in the country by holding opponents to a 61.1 scoring average. The team is 12th in the nation with a 12.6 scoring margin advantage over opponents through 27 games, is 22nd by forcing 16.2 turnovers per game and third in the Big 12 with 37.6 rebounds per game after a 45-36 rebounding advantage over Texas last Saturday.

The Red Raiders have entered the top-10 of the rankings in four of the past five seasons and did it this year by working their way up from beginning as an unranked team. Tech was not ranked for the first five weeks of the season before entering at No. 25 on December 13 following a win over Tennessee in the Jimmy V Classic. TTU spent four straight weeks at No. 25 before moving to No. 19, No. 18, No. 13, No. 14 and No. 9 in the national poll. Tech’s highest Associated Press ranking in program history came at No. 6 in February of 2018 (16th Week Poll) and the program spent one week at No. 7 last season before dipping back. The 2018-19 team was No. 8 in the final week of the regular season and No. 7 throughout the postseason that led to the 2019 National Championship Final.

Tech is 12-10 in the regular season as a top-10 team and 22-13 when adding postseason games in program history. The Red Raiders have now won 20 or more games in 16 seasons as a program.